The COVID-19 pandemic in Slovakia is of the worldwide pandemic of coronavirus disease 2019 (COVID-19) caused by severe acute respiratory syndrome coronavirus 2 (SARS-CoV-2). The virus was confirmed to have spread to Slovakia on 6 March 2020 when Prime Minister Peter Pellegrini announced that a 52-year-old man was infected. [2] He had not travelled anywhere but his son had travelled to Venice in Italy, and was later confirmed as the first Slovak to be infected. Three cases were then confirmed, including the man's son and wife. [3] During the next few days, COVID-19 cases went up to 21 out of 832 tested.

Pellegrini adopted some of the strictest precautions in Europe at the time by banning all personal international flights, rail and bus travel, and unnecessary foreign travel; implementing border checks and a compulsory 14-day quarantine for everyone returning from abroad, and closing all schools nationwide. [4] The following precautions were also taken:

On 12 January 2020, the World Health Organization (WHO) confirmed that a novel coronavirus was the cause of a respiratory illness in a cluster of people in Wuhan City, Hubei Province, China, which was reported to the WHO on 31 December 2019. [36] [37]

On 26–27 February, the annual Biogen conference took part in Boston attended by 175 executives, including from Slovakia. The conference was later identified as a super-spreading event with 300,000 additional cases of COVID-19 being attributed to it, notably in the United States, Australia, Slovakia and Sweden. [41]

On 6 March, the first coronavirus case in Slovakia was confirmed. It was a 52-year-old man. It was a person-to-person spread, because the infected person had not been outside Slovakia lately, but his son had been in Venice, Italy. His son tested positive the next day, and had not shown any symptoms before. [42]

Number of infected people on this day was 1.

Number of infected people on this day was 3.

Ministry of Interior of Slovak Republic confirmed two more cases. The first infected person was a teacher in an infant school in Ružinov, Bratislava and the other one was a public transit bus driver from Bratislava. [44]

The condition of the first infected man had gotten worse, and he was transported to an intensive care unit. [45] Prime Minister Peter Pellegrini confirmed that there were 2 more cases of coronavirus in Slovakia. The first case was an employee of the U. S. Steel company in Košice and the second case was his wife from Martin. [46] In a press conference, the mayor of Bratislava Matúš Vallo announced that effective from Tuesday all educational institutions: (kindergartens, schools, universities) in Bratislava (city and Region) will be closed until Friday. Later on, a nationwide school quarantine was imposed for 2 weeks (until 27 March). [47]

On this day, three more cases of the coronavirus were confirmed, taking the total number of infected to 10. Prime Minister Peter Pellegrini said that these people had been in contact with the infected Slovak family in Kittsee, Austria. [48]

Six new cases of patients were confirmed by the prime minister at the country's crisis meeting which started at 11AM. All of the cases happened in Bratislava, as confirmed by the debriefing of the crisis meeting. [49] Later that day, five more cases were confirmed positive, making the number of COVID-19 cases rise to 21, mostly spread around the western region of the country. [50] Starting from 7AM (CET) border control was reinstated on the borders with Hungary, the Czech Republic and Austria. No traveller without a permanent residence or employment in Slovakia would be admitted. The train timetable during holidays for domestic trains became valid on weekdays as well. According to Prime Minister Peter Pellegrini, "Everything which is not vital will be closed for 14 days", in order to restrict the propagation of the virus. [51] 20 health workers from the University Hospital in Ružinov were quarantined after unfair preferential admittance of a positively diagnosed patient arriving from Miami by the hospital director (case #11). [52]

Twenty-five people tested positive, taking the number of cases to 97 infected out of 1913 people tested. The Institute of the Health Policy expected the number of infected to reach 10% of the country's population. This would occur around 110 days from the start of the epidemic. [58]

Eight people tested positive, the number went over 100, and the total number of cases was 105. On this day prime minister Peter Pellegrini announced the first death: an 84-year-old woman. It remained unknown if she had died because of the Coronavirus, because she had several other major health problems. [60] Later on, Pellegrini announced that with high probability, massive heart attack was cause of death. [61] Of the 105 cases, only 35 (34%) were hospitalised. Twice as many: 70 (66%) were in home quarantine. [62] Even though infection ward capacities were not enough as their bed numbers had been decreased. The second largest and also international train station in Bratislava - Petržalka stopped all passenger transport and also closed the underpass connecting Panónská and Kopčianska streets. [63]

Nineteen new cases of the infection were recorded on this day. At least 5 of them were in home isolation (mainly cases diagnosed in Bratislava) the remaining 14 cases were hospitalised. Lowering the number of home treatment to 60% and increasing those hospitalised to 40%. As the autopsy of the woman who had died the day before decided that a stroke was the likely cause of death, she was dropped from the total number of patients, which climbed to 123, as opposed to 124, active cases in total. [64]

Fourteen people tested positive, increasing the number of cases to 137. [54] 3 of them, 2 males: one from Humenné, the other from Michalovce and a woman from Jakubovany were placed in the Quarantine Center in Gabčíkovo. [65] In terms of hospitalisations: the total number grew to 60 (43%) of all cases. The remaining cases are under home isolation. In terms of spreading: 3 cases were identified upon return from Austria (all 3 quarantined at Gabčíkovo), one upon return from Paris and one had been in contact with a person from Austria. 7 patients who had contracted novel coronavirus have been released from hospital today. [66]

All games in Slovakia's top football league: Fortuna Liga were to be postponed till May. [67] Slovnaft donated 6 lung respirators to the University Hospital of Bratislava (UNB). [68] The infectious hospital at Kramáre set up a tent for triaging and testing in front of its ordinary entrance. [69] Late in the evening the first plane with 198 passengers on board brought Slovaks willing to return home from abroad. The plane came from the United Kingdom, all passengers were tested and underwent a mandatory quarantine in the center in Gabčíkovo. [70]

Forty-one people tested positive, increasing the number of cases to 179. That was the highest increase since the beginning of the spread. 399 tests were conducted on that day, making the total 3257 which is far behind what should have been done, according to many experts. Also only 3000 tests remain, which should barely last for 10 days. The Kardiocentrum Nitra closed on this day and the staff were quarantined after the admission of a patient suspected of having Coronavirus. [71] Also in Nitra, a second tent was raised at the hospital grounds to serve as a temporary infectious triage centre. [72] Slovak mobile operators came forward with different offers and packages to help their clients, ranging from free calls to health service numbers, increased speeds and volume of data packages, as well as entertainment channels, mainly for kids. [73] Slovaks returning home with the help of the government filled all three quarantine facilities (Gabčíkovo, Liptovský Ján, Donovaly) ran by the Ministry of Interior. A fourth one was opened in Vysoké Tatry under the jurisdiction of the Ministry of Defence. [74] Banks announced they would allow clients to postpone payments of their monthly installments on loans. [75]

Seven more people tested positive. 235 tests were negative. Total tests: 3499. 6 of the seven cases are hospitalized: 2 in each of the hospitals of Bratislava, Nitra and Martin. One person was in a quarantine in the Gabčíkovo Quarantine Center. [76] The entire gynecological department of the University hospital in Ružinov, Bratislava was closed today, after it was discovered that a doctor has recently returned from abroad. [77] Blood reserves and blood donations were decreasing. [78] Buses with Slovaks from the UK arrived in a quarantine center in Bardejov. [79]

The new Prime Minister, Igor Matovič, announced that he wants to test 3000 people every day. [79]

The number of cases from the previous day starts to be updated in the morning of the next day. [79]

Twenty-two more people tested positive on the previous day. Total tests: 7441. Blood donations are decreasing rapidly. New Minister of Health Marek Krajčí asked all eligible people to donate blood, if possible. [79] 60-year-old man has died just hours after being released from hospital where he was treated at pulmonary department and tested for COVID-19 with positive result. [80] The cause of death was not yet confirmed to be due to COVID-19 as of 5 April. [81]

Due to a surge in infections, Slovakia has imposed stricter restrictions for unvaccinated citizens effective 22 November. Only citizens that have been vaccinated or recovered from a COVID-19 infection in the last six months will be permitted to enter restaurants, shopping malls, shops with non-essential goods, sports activities and public events. Some services will face further restrictions even for those vaccinated, in regions that are more severely affected. Most regions will require unvaccinated citizens to be tested in the workplace. The restrictions will be in place for three weeks, but the Prime Minister stated that more restrictions could be implemented if the situation does not improve. He called this policy a “lockdown for the unvaccinated”. [82] [83]

Slovakia does not recognise same-sex marriage or civil unions. In addition, the Constitution limits marriage to opposite-sex couples. Bills to recognise same-sex partnerships were introduced four times, in 1997, in 2000, in 2012 and in 2018, but were all rejected.

The 7th OTO Awards, honoring the best in Slovak popular culture for the year 2006, took time and place on March 14, 2007, at the former Opera building of the Slovak National Theater in Bratislava. The ceremony broadcast live STV. The host of the show was Jozef Bednárik.

Jakub Kroner is a Slovak filmmaker. His second feature film, Lóve (2011), became the box office number-one Slovak-language film of the year in his home country, while ranked the third highest-grossing ever since the independent Slovakia. As the youngest generation member of the Kroner acting family, he is the son of Janko Kroner and a grandson of Jozef himself.

In the run up to the 2020 Slovak parliamentary election, various organisations carry out opinion polling to gauge voting intention in Slovakia. Results of such polls are displayed in this article. 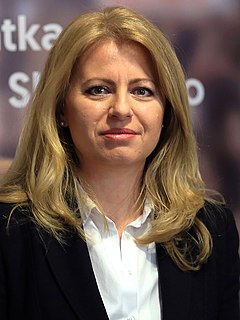 Presidential elections were held in Slovakia in March 2019. Incumbent President Andrej Kiska did not run for a second term.

Elections were held in Slovakia's 8 self-governing regions on 4 November 2017.

The 2019–20 Slovak First Football League was the 27th season of first-tier football league in Slovakia since its establishment in 1993. 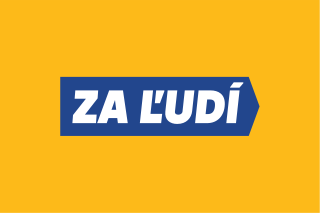 For the People is a centrist political party in Slovakia founded by former President Andrej Kiska in 2019. Kiska became party's leader on founding convention on 28 September 2019. Deputy Prime Minister and Investments, Regional Development and Informatisation Minister Veronika Remišová became the new chair of the party on 8 August 2020, having been elected by delegates at the party congress held in Trenčianske Teplice, defeating her rival candidate, MP and Hlohovec mayor Miroslav Kollár.

The 2020–21 Slovak First Football League was the 28th season of first-tier football league in Slovakia since its establishment in 1993.

The 2020–21 season was ŠK Slovan Bratislava's 15th consecutive in the top flight of Slovak football.

The 2020–21 season was the 26th season of competitive association football in Slovakia after Czechoslovakia was divided into two new states.

Marek Mach is a Slovak activist, entrepreneur, co-founder and chairman of civic association Mladí, who is known for founding of the Youth Against Fascism initiative.

Homeland is a non-parliamentary political party in Slovakia.