Urticarial rash is seen in several bacterial and viral infections, so COVID-19 is no exception. These rashes are more commonly found in the trunk and limbs, relatively sparing the acral sites. Systemic corticosteroids are a therapeutic option for urticarial rash induced by COVID-19. [4]

Livedo reticularis refers to slowing of blood flow, leading to desaturation of blood and bluish discolouration of the skin. This type of skin rashes may be seen in cold-induced vasoconstriction as seen in polycythemia or other causes leading upto focal impairment of blood flow. [4] 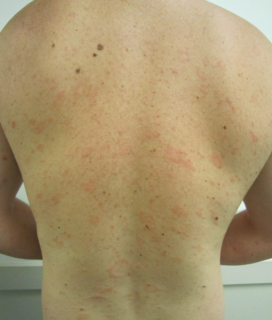 Pityriasis rosea is a type of skin rash. Classically, it begins with a single red and slightly scaly area known as a "herald patch". This is then followed, days to weeks later, by a rash of many similar but smaller round or oval lesions, mainly on the trunk and upper limbs. About 20% of cases show atypical deviations from this pattern. It usually lasts less than three months and goes away without treatment. Sometimes malaise or a fever may occur before the start of the rash or itchiness, but often there are few other symptoms.

Erythema ab igne (EAI), also known as hot water bottle rash, is a skin condition caused by long-term exposure to heat. Prolonged thermal radiation exposure to the skin can lead to the development of reticulated erythema, hyperpigmentation, scaling and telangiectasias in the affected area. Some people may complain of mild itchiness and a burning sensation, but often, unless a change in pigmentation is seen, it can go unnoticed.

Livedo reticularis is a common skin finding consisting of a mottled reticulated vascular pattern that appears as a lace-like purplish discoloration of the skin. The discoloration is caused by reduction in blood flow through the arterioles that supply the cutaneous capillaries, resulting in deoxygenated blood showing as blue discoloration. This can be a secondary effect of a condition that increases a person's risk of forming blood clots, including a wide array of pathological and nonpathological conditions. Examples include hyperlipidemia, microvascular hematological or anemia states, nutritional deficiencies, hyper- and autoimmune diseases, and drugs/toxins.

Necrolytic migratory erythema is a red, blistering rash that spreads across the skin. It particularly affects the skin around the mouth and distal extremities; but may also be found on the lower abdomen, buttocks, perineum, and groin. It is strongly associated with glucagonoma, a glucagon-producing tumor of the pancreas, but is also seen in a number of other conditions including liver disease and intestinal malabsorption.

Sneddon's syndrome is a form of arteriopathy characterized by several symptoms, including:

Dermatoses of pregnancy are the inflammatory skin diseases that are specific to women while they are pregnant. While some use the term 'polymorphic eruption of pregnancy' to cover these, this term is a synonym used in the UK for Pruritic urticarial papules and plaques of pregnancy, which is the commonest of these skin conditions.

In medicine, a drug eruption is an adverse drug reaction of the skin. Most drug-induced cutaneous reactions are mild and disappear when the offending drug is withdrawn. These are called "simple" drug eruptions. However, more serious drug eruptions may be associated with organ injury such as liver or kidney damage and are categorized as "complex". Drugs can also cause hair and nail changes, affect the mucous membranes, or cause itching without outward skin changes.

Gianotti–Crosti syndrome, also known as infantile papular acrodermatitis, papular acrodermatitis of childhood, and papulovesicular acrolocated syndrome, is a reaction of the skin to a viral infection. Hepatitis B virus and Epstein–Barr virus are the most frequently reported pathogens. Other viruses implicated are hepatitis A virus, hepatitis C virus, cytomegalovirus, coxsackievirus, adenovirus, enterovirus, rotavirus, rubella virus, HIV, and parainfluenza virus.

Parakeratosis is a mode of keratinization characterized by the retention of nuclei in the stratum corneum. In mucous membranes, parakeratosis is normal. In the skin, this process leads to the abnormal replacement of annular squames with nucleated cells. Parakeratosis is associated with the thinning or loss of the granular layer and is usually seen in diseases of increased cell turnover, whether inflammatory or neoplastic. Parakeratosis is seen in the plaques of psoriasis and in dandruff.

Large plaque parapsoriasis are skin lesions that may be included in the modern scheme of cutaneous conditions described as parapsoriasis. These lesions, called plaques, may be irregularly round-shaped to oval and are 10 cm (4 in) or larger in diameter. They can be very thin plaques that are asymptomatic or mildly pruritic. Large-plaque parapsoriasis is a common associate of retiform parapsoriasis, can be accompanied by poikiloderma vasculare atrophicans, and can in rare occasions be a precursor to cutaneous T-cell lymphoma.

Cryofibrinogenemia refers to a condition classified as a fibrinogen disorder in which the chilling of an individual's blood plasma from the normal body temperature of 37 °C to the near-freezing temperature of 4 °C causes the reversible precipitation of a complex containing fibrinogen, fibrin, fibronectin, and, occasionally, small amounts of fibrin split products, albumin, immunoglobulins and other plasma proteins. Returning this plasma to 37 °C resolubilizes the precipitate.

The term morbilliform refers to a rash that looks like measles. The rash consists of macular lesions that are red and usually 2–10 mm in diameter but may be confluent in places. A morbilliform rash is a rose-red flat (macular) or slightly elevated (maculopapular) eruption, showing circular or elliptical lesions varying in diameter from 1 to 3 mm, with healthy-looking skin intervening.

Retiform parapsoriasis is a cutaneous condition, considered to be a type of large-plaque parapsoriasis. It is characterized by widespread, ill-defined plaques on the skin, that have a net-like or zebra-striped pattern. Skin atrophy, a wasting away of the cutaneous tissue, usually occurs within the area of these plaques.

Poikiloderma vasculare atrophicans (PVA), is a cutaneous condition characterized by hypo- or hyperpigmentation, telangiectasia and skin atrophy. Other names for the condition include prereticulotic poikiloderma and atrophic parapsoriasis. The condition was first described by pioneer American pediatrician Abraham Jacobi in 1906. PVA causes areas of affected skin to appear speckled red and inflamed, yellowish and/or brown, gray or grayish-black, with scaling and a thinness that may be described as "cigarette paper". On the surface of the skin, these areas may range in size from small patches, to plaques, to neoplasms.

Livedo racemosa is a skin condition with persistent red or violet discoloration, characterised by a broken, branched, discontinuous and irregular pattern. It can be restricted to the limbs or diffuse. It is usually the first sign of a systemic vascular disorder.

Esther Ellen Freeman is an American physician who is an Assistant Professor of Dermatology at the Harvard Medical School and Director of Global Health Dermatology at Massachusetts General Hospital. Her research considers HIV infection with AIDS-defining malignancies, including Kaposi's sarcoma. During the COVID-19 pandemic Freeman established the American Academy of Dermatology register of COVID-19 skin complaints, through which she identified the novel symptom of COVID toes.