Dr. Harsh Vardhan (born Harshvardhan Goel, [2] 13 December 1954) is an Indian otorhinolaryngologist. He had served as the Minister of Health and Family Welfare, Minister of Science and Technology and Minister of Earth Sciences in the BJP-led NDA government of Prime Minister Narendra Modi from 30 May 2019 to 7 July 2021. [1] He represents Chandni Chowk in Delhi as a Member of Parliament in the 17th Lok Sabha. He was elected to the office of Chairperson of Executive Board of the World Health Organization from May 22, 2020. [3] Vardhan has been prominent in the Indian government's response to the COVID-19 pandemic. [4] He later resigned from his cabinet post ahead of the cabinet reshuffle in July 2021. [1]

Harsh Vardhan was born in Delhi to Om Prakash Goel and Sneh Lata Goel. [5] Vardhan finished his schooling from Happy School, Daryaganj, in 1971. He attended Zakir Husain Delhi College of the University of Delhi and Ganesh Shankar Vidyarthi Memorial Medical College of the Kanpur University, where he graduated in 1979 with a Bachelor of Medicine, Bachelor of Surgery. He earned his Master of Surgery in Otorhinolaryngology from the same college in 1983.[ citation needed ] He has been a member of the Rashtriya Swayamsevak Sangh since childhood. [6]

Minister of Health and Family Affairs of Delhi

Vardhan as the State Minister of Health in 1994 oversaw the implementation of the pilot project of the Pulse Polio Programme which involved the mass immunisation of 1 million children up to the age of 3 in Delhi. [14] In 1995, this programme was launched nationwide leading to 88 million children being immunised. [15] On 28 March 2014, India was declared polio-free by the WHO, as there had been no reported cases for three years. [16]

In 1997, the Delhi Prohibition of Smoking and Non-Smokers Health Protection Act was passed in the Delhi assembly which was one of the first anti-tobacco laws implemented by any state government. [17] The act applied across the NCT of Delhi. It prohibited smoking in places of public work or use for example hospitals, restaurants, and educational institutions and in public service vehicles. It also prohibited the sale of smoking substances such as tobacco and beedis to anyone below the age of eighteen. Smoking products could not also be sold or stored within 100 metres of any educational institution. Under the provisions of the act, fines would be applied to anyone who contravened the law and they could potentially be ejected from places of public use by the police. [18]

On 23 October 2013, Vardhan was named the Chief Minister candidate for Delhi Assembly elections by the BJP. [19] After the 2013 elections, BJP emerged as the single largest party winning 31 out of the 70 seats in the Fifth Legislative Assembly of Delhi. However, they fell short of an absolute majority so were unable to form the government. [20]

Vardhan contested the Chandni Chowk seat in Delhi where he defeated the incumbent Union Minister of Law and Justice, Kapil Sibal of the Indian National Congress. [21] He was also appointed in the first Narendra Modi government as Minister of Health and Family Welfare on 26 May 2014. [22] [23] In May 2017, he was given the additional charge of Ministry of Environment, Forest and Climate Change following the death of Minister Anil Madhav Dave. [24]

Vardhan again contested the Chandni Chowk seat in Delhi where he defeated Congress candidate Jai Parkash Aggarwal by a margin of 2,28,145 votes. While he received 52.94% votes, runner-up Aggarwal polled 29.67% votes. [25]

On 30 May 2019, Vardhan was sworn in as a cabinet minister in Prime Minister Narendra Modi's second term government. He is put in charge of the Minister of Health and Family Welfare, Minister of Science and Technology and Minister of Earth Sciences. [26] [27]

Vardhan has been prominent in this role during the COVID-19 pandemic in India. In February 2021, he endorsed an unproven "herbal cure" for COVID-19 devised by a company run by yoga guru Ramdev, prompting criticism from health experts. [28] In early March 2021, he declared the country was in the "endgame" of the pandemic, shortly before infections across the country rose dramatically in its second wave in April. [4]

Vardhan as a cabinet minister in Narendra Modi government, declared reservation for academic calendar 2020-2021 in MBBS and BDS colleges for the children of COVID-19 workers who died during COVID-19 pandemic in India. [29] [ clarification needed ]

As a part of Cabinet Reshuffle on 7 July 2021, Dr Harshvardhan resigned from his post of Union Health Minister after holding its two years of office. [30]

At the 105th Indian Science Congress in March 2018, after the death of legendary British scientist Stephen Hawking, Vardhan claimed that Hawking had said that the Vedas postulated a theory superior to Albert Einstein's theory of relativity, despite the fact that there is no record of Hawking having made the statement. [31] [32] [33]

In 2019, after the Health Effects Institute released a scientific report estimating 1.2 million annual deaths in India due to air pollution, Vardhan denied the results, arguing that this report was intended to create panic [34] In 2021, Indian Medical Association (IMA), the largest association of doctors in India, issued a statement which it objected to Vardhan who was endorsing Coronil, a product of Patanjali Ayurved. [35] IMA questioned the ethics of a health minister of the country to release such falsely fabricated unscientific product to the people of the country. [36]

Vardhan has received the following awards and recognitions: [37]

Vardhan is married to Nutan, and they have two sons and one daughter. [6] 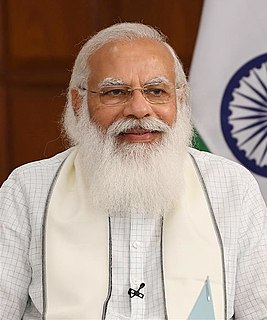 Narendra Damodardas Modi is an Indian politician serving as the 14th and current prime minister of India since 2014. He was the chief minister of Gujarat from 2001 to 2014 and is the Member of Parliament for Varanasi. Modi is a member of the Bharatiya Janata Party (BJP) and its National Democratic Alliance (NDA). He is also a member of the Rashtriya Swayamsevak Sangh (RSS), a Hindu nationalist volunteer organisation. He is the first prime minister born after India's independence in 1947, the second non-Congress one to win two consecutive terms after Atal Bihari Vajpayee and the first from outside the Congress to win both terms with a majority in the Lok Sabha.

Rajiv Pratap Rudy is an Indian politician from the Bharatiya Janata Party, and a Member of Parliament representing Saran in Bihar, India.

Swami Ramdev, also known as Baba Ramdev, is an Indian yoga guru and businessman, primarily known for his popularising Yoga and Ayurveda in India. Ramdev has been organizing and conducting large yoga camps since 2002, broadcasting his yoga classes on various TV channels. He co-founded the Patanjali Ayurved Ltd. with his colleague Balkrishna. In 2010, he announced to form a political party for 2014 General Election. However, he has more recently become a vocal advocate for the BJP. 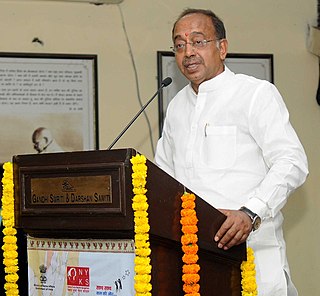 Vijay Goel is an Indian politician and a former Minister of State for Parliamentary Affairs and Statistic and Implementation in the NDA government. A former Minister of Youth Affairs and Sports, Goel is affiliated with the Bharatiya Janata Party (BJP). He became president of the Delhi unit of the BJP in February 2013. He was elected to Rajya Sabha from Rajasthan in 2014.

Sarbananda Sonowal is an Indian politician from Assam who is the current Minister of Ports, Shipping and Waterways and Minister of AYUSH in the Government of India. He is also a member of the Cabinet Committee on Political Affairs. He is a former Chief Minister of Assam and a former MLA in Assam Legislative Assembly. Sonowal earlier served as the Assam state President of Bharatiya Janata Party (BJP) from 2012 to 2014 and again in 2015 to 2016. He has also served as the Minister for Sports and Youth Affairs, Government of India, from 2014 to 2016. He was chosen to be the Chief Minister of Assam after the 2016 Assam Legislative Assembly election and he became the first Chief Minister of the state from Bharatiya Janata Party. During the cabinet reshuffle on 7th July 2021, he was inducted to the 2nd Modi Cabinet.

Harsharan Singh Balli is an Indian politician belonging to Aam Aadmi Party, Ex-BJP leader, who was Industrial Minister in the Delhi state government of Madan Lal Khurana. He is the most powerful politician based in west Delhi. 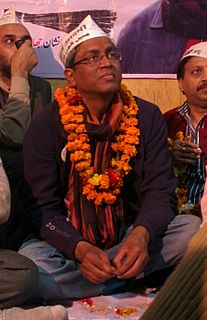 Harsh Vardhan may refer to:

Jagat Prakash Nadda is an Indian politician and lawyer serving as the president of the Bharatiya Janata Party since 20 January 2020. He was the BJP's working president from June 2019 to January 2020.

Ashwini Kumar Choubey is Minister of State for Consumer Affairs, Food and Public Distribution and Environment, Forest and Climate Change and a member of the 17th Lok Sabha. He is an Indian politician belonging to the Bharatiya Janata Party. He is a member of the 16th Lok Sabha representing Buxar and a former health minister of Bihar. He had represented the Bihar legislative assembly from Bhagalpur before contesting for the 16th Lok Sabha election. On 3 September 2017, he took in charge of office as Minister of State for Health in Narendra Modi's Government. He resigned in July 2021. 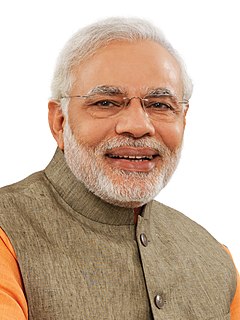 The 21st Ministry of the Republic of India is the Council of Ministers headed by Narendra Modi that was formed after the 2014 general election which was held in nine phases from 7 April to 12 May in 2014. The results of the election were announced on 16 May 2014 and this led to the formation of the 16th Lok Sabha. The Council assumed office from 27 May 2014. 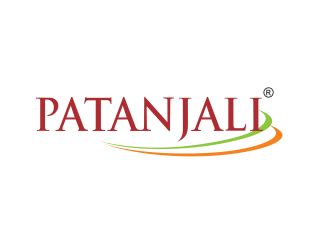 Patanjali Ayurved,, is an Indian multinational consumer packaged goods company based in Haridwar, India. It was founded by Baba Ramdev and Acharya Balkrishna in 2006. Its registered office is located in Delhi, with manufacturing units and headquarters in the industrial area of Haridwar. The company manufactures cosmetics, ayurvedic medicine, and food products.