Air Transat is a Canadian airline based in Montreal, Quebec. Founded in 1986, it is the country's third-largest airline, operating scheduled and charter flights, serving 60 destinations in 25 countries. [8] [9] [10] Air Transat is owned and operated by Transat A.T. Inc., having access to a fleet of 34 aircraft. [4]

François Legault founded Air Transat with other business partners such as Jean-Marc Eustache, Philippe Sureau, Lina de Cesare, Yvon Lecavalier, and Pierre Ménard. Legault left the company in 1997 with no forewarning after a dispute with business partners, who only found out after the fact. [11] [12]

Air Transat made its inaugural flight on November 14, 1987, travelling from Montreal to Acapulco. Six years later, Air Transat assumed defunct Nationair's maintenance base and aircraft. Today,[ when? ] the company books over 3.5 million passengers a year. It is a wholly owned subsidiary of Transat A.T. Inc.

On February 13, 2009, Transat A.T. announced a five-year partnership with CanJet. Since 1 May 2009, Transat Tours Canada has chartered CanJet's Boeing 737 aircraft flying from Canadian cities to various destinations. This replaced an agreement with Calgary-based Westjet. [13]

On February 13, 2011, Air Transat Flight TS163 operated with their first all-female flight crew from Cancun to Vancouver. The airline has won many awards, including the 2012, 2018 and 2019 Skytrax World's Best Leisure Airline Awards. [14]

Although the first two groups of refugees from Syria arrived in Canada on government aircraft in December 2015, the next two groups were on Air Transat aircraft; the first was Flight TS8500 from Amman, Jordan to Toronto which departed on 20 December. While it was unlikely that Air Transat would be the exclusive airline chartered by the Canadian government, especially if more than 35,000 refugees would arrive in 2016 [16] a spokesman advised the Toronto Star that the company had been confirmed as the airline that would bring the second group to Canada on 21 December. [17] In a Transat press release, Jean-François Lemay, the carrier's general manager made the following statement, "We are very pleased to be the first Canadian airline company to engage in this major humanitarian effort, and to be assisting the Canadian government and international authorities in this way." [18]

In May 2017, Air Transat and Flair Air were accused by a CBC News story of misleading customers and regulators in both Canada and Mexico by marketing and selling nonstop tickets between Edmonton and Cancun. CBC uncovered a letter in which the airlines admitted that they would frequently divert for a technical stop to refuel. [19]

On 16 May 2019, Transat AT, the company that owns Air Transat, announced it was in exclusive talks to be purchased by Air Canada. An offer was subsequently made by the latter at C$13 per share and another company, Group Mach, proposed purchase at C$14.

On 27 June 2019, the Board of Transat AT accepted Air Canada's all-cash bid of C$520 million and did not comment on the C$527.6 proposal from Group Mach because the talks with Air Canada were still exclusive. The deal required approval by two-thirds of shareholders; some major investors and some financial analysts stated that the offer is below the true value of the company. Regulatory and governmental approval would be required for sale of Transat AT. A May report by the Canadian Broadcasting Corporation stated that "regulatory approvals are no sure thing". [21] If the Air Canada purchase is concluded, Air Transat would continue to operate as separate brand. [22] [23] [24]

By mid August, Air Canada increased its offer by nearly 40% to C$18 per share from C$13, valuing the acquisition at C$720 million ($544 million in American Dollars), to obtain backing from Letko Brosseau, Transat AT's largest shareholder with 19% of the company. [25] On 23 August, a 95% majority of Transat's voting shareholders approved the Air Canada proposal at C$18 ($13.53) per share, after the Quebec Administrative Court of Financial Markets rejected the rival bid from Groupe Mach on 12 August. [26] The proposed transaction should be publicly assessed by Transport Canada until 2 May 2020, before the buyout closes. [27] Price per share will be revised to $5 in October 2020. [28]

On 2 April 2021, the deal was dropped following a failure to secure European Commission approval. [29]

In January 2021, in the wake of the COVID-19 pandemic and government restrictions, Air Transat announced it was suspending its regular operations from January 29 to April 30, 2021 and all operations from February 14 to April 30, 2021. [30] On July 23, 2020, Air Transat announced that it would resume its service following an interruption of 112 days. [31] British consumer site MoneySavingExpert named Air Transat as one of the worst performing travel firms for refunding passengers whose flights or trips were cancelled. The CAA said that the airline was refusing to refund passengers whose flights had been cancelled by the airline, [32] which for flights to and from Europe (including the UK) was a breach of Flight Compensation Regulation which requires airlines to refund passengers whose flights are cancelled under any circumstances, even if some of the other compensation requirements are relaxed for circumstances completely outside of the airline's control, such as a global pandemic.

As of May 16,2021 [update] , Air Transat has the following 35 aircraft registered with Transport Canada but some are not listed on the Air Transat website: [4] [5]

Air Transat has operated several other aircraft types in the past including the following: [47]

WestJet Airlines Ltd. is a Canadian airline founded in 1994 that began operations in 1996. It began as a low-cost alternative to the country's competing major airlines. WestJet provides scheduled and charter air service to more than 100 destinations in Canada, the United States, Europe, Mexico, Central America, and the Caribbean. The airline's headquarters is located adjacent to the Calgary International Airport.

The Airbus A310 is a wide-body aircraft; designed and manufactured by Airbus Industrie, then a consortium of European aerospace manufacturers. Airbus had demand for an aircraft smaller than the A300, the first twin-jet wide-body. On 7 July 1978, the A310 was launched with orders from Swissair and Lufthansa. On 3 April 1982, the first prototype conducted its maiden flight, and it received its type certification on 11 March 1983.

CanJet was a Canadian low-cost air carrier headquartered in Enfield, Nova Scotia and based at Halifax International Airport. In addition to initially flying scheduled passenger service, CanJet operated charter flights using its own brand as well as flying contract and ad hoc charters for other tour operators and airlines throughout Canada and the United States. CanJet was wholly owned by IMP Group International and had 572 employees as of March 2007. The airline ceased operations in 2015.

Air Transat Flight 236 was a transatlantic flight bound for Lisbon, Portugal, from Toronto, Canada, that lost all engine power while flying over the Atlantic Ocean on August 24, 2001. The Airbus A330 ran out of fuel due to a fuel leak caused by improper maintenance. Captain Robert Piché, 48, an experienced glider pilot, and First Officer Dirk de Jager, 28, glided the plane to a successful emergency landing in the Azores, saving all 306 people on board. Most of the passengers on the flight were Canadians visiting Europe or Portuguese expatriates returning to visit family in Portugal. This was also the longest passenger aircraft glide without engines, gliding for nearly 75 miles or 120 km. Following this unusual aviation accident, this aircraft was nicknamed the "Azores Glider" 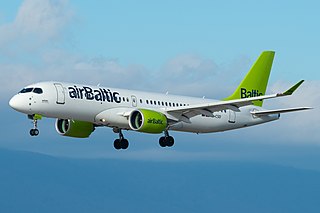 The Airbus A220 is a family of narrow-body airliner designed by Bombardier Aerospace as the Bombardier CSeries. The smaller variant, seating 108 to 133, made its maiden flight on 16 September 2013, was awarded an initial type certification by Transport Canada on 18 December 2015, and entered service on 15 July 2016 with launch operator Swiss Global Air Lines. The longer variant, seating 130 to 160, first flew on 27 February 2015, received an initial type certification on 11 July 2016, and entered service with airBaltic on 14 December 2016. 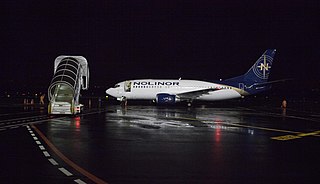 Les Investissements Nolinor Inc., trading as Nolinor Aviation, is a charter airline based in Mirabel, a suburb of Montreal, Quebec, Canada. It operates passenger charter and cargo services within Canada and to the U.S. Its main base is Montréal–Mirabel International Airport. It has 200 employees.

Royal Aviation was the parent of Canadian scheduled passenger and charter airline, Royal Airlines, which was based in Montreal Dorval Airport. The airline was acquired in 2001 by Canada 3000, which in turn went bankrupt in the months following the events of September 11, 2001. 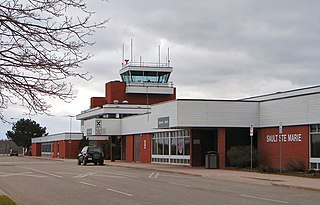 Sault Ste. Marie Airport,, is an international airport located 8.0 nautical miles west-southwest of the city of Sault Ste. Marie, Ontario, Canada at the far eastern end of Lake Superior and the beginning of the St. Mary's River.

Quebecair was a Canadian airline that operated from 1947 until 1986. Quebecair was headquartered in Saint-Laurent, Quebec, now a part of Montreal.

Sunwing Airlines Inc. is a Canadian low-cost airline headquartered in the Etobicoke district of Toronto, Ontario.

Flair Airlines, is a Canadian low-cost airline headquartered in Edmonton, Alberta, with its main hub at Edmonton International Airport. The company operates scheduled domestic passenger services and charters in Canada, USA, and internationally. 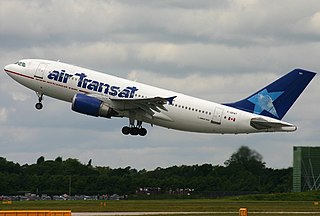 Air Transat Flight 961 was an Air Transat flight from Varadero, Cuba to Quebec City, Canada on March 6, 2005. The aircraft experienced a structural failure in which the rudder detached in flight. The flight crew were able to regain enough control of the aircraft to return safely to Varadero. As of March 2020, the Airbus A310-308 is no longer in service.

Air Canada Rouge, rouge meaning "red" in French, is a low-cost airline and subsidiary of Air Canada. It is fully integrated into the Air Canada mainline and Air Canada Express networks; flights are sold with AC flight numbers but are listed as "operated by Air Canada Rouge". The airline’s service is currently suspended due to Canadian travel restrictions.