Trotskyism first emerged in South Africa in the 1930s. [1] 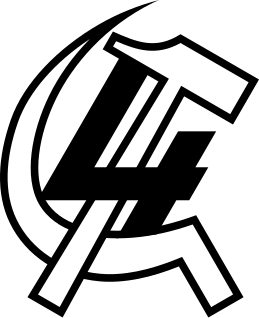 Max Shachtman was an American Marxist theorist. He went from being an associate of Leon Trotsky to a social democrat and mentor of senior assistants to AFL-CIO President George Meany.

James "Jock" Ritchie Haston (1913–1986) was a Trotskyist politician and General Secretary of the Revolutionary Communist Party in Great Britain.

The Marxist Group was an early Trotskyist group in the United Kingdom.

The Workers Party of South Africa (WPSA) was the first Trotskyist organisation in South Africa to have a national base. It published a regular newspaper, Spark.

The Non-European Unity Movement (NEUM) is a Trotskyist organisation formed in South Africa in 1943. It had links to the Workers Party of South Africa (WPSA), the first countrywide Trotskyist organisation, and was initially conceived as a broad protest front. It proposed a 10 Point Programme of radical reforms. It stressed non-racialism, meaning that it rejected race-based organising, unlike the main nationalist groups of the time, was highly critical of the South African Communist Party and the African National Congress, and made a principle of non-collaboration with the apartheid regime and its allies

The International Socialist League of South Africa was the earliest major Marxist party in South Africa, and a predecessor of the South African Communist Party. The ISL was founded around the syndicalist politics of the Industrial Workers of the World and Daniel De Leon.

The International Committee of the Fourth International (ICFI) is the name of two Trotskyist internationals; one with sections named Socialist Equality Party which publishes the World Socialist Web Site, and another linked to the Workers Revolutionary Party in the UK.

The International Communist League , earlier known as the International Spartacist tendency is a Trotskyist international. Its largest constituent party is the Spartacist League (US). There are smaller sections of the ICL (FI) in Mexico, Canada, France, Germany, Ireland, Italy, Japan, South Africa, Australia, Greece and the United Kingdom.

The Communist League of America (Opposition) was founded by James P. Cannon, Max Shachtman and Martin Abern late in 1928 after their expulsion from the Communist Party USA for Trotskyism. The CLA(O) was the United States section of Leon Trotsky's International Left Opposition and initially positioned itself as not a rival party to the CPUSA but as a faction of it and the Comintern. The group was terminated in 1934 when it merged with the American Workers Party headed by A. J. Muste to establish the Workers Party of the United States.

Baruch Hirson was a South African political activist, academic, author and historian, who was jailed for nine years in apartheid-era South Africa before moving to England in 1973. He was co-founder of the critical journal Searchlight South Africa, and in 1991 a critic of what he referred to as Stalinist methods used by the African National Congress (ANC).

The Socialist Workers Party (SWP) is known as a communist party in the United States. Originally a group in the Communist Party USA that supported Leon Trotsky against Soviet leader Joseph Stalin, it places a priority on "solidarity work" to aid strikes and is strongly supportive of Cuba. The SWP publishes The Militant, a weekly newspaper that dates back to 1928. It also maintains Pathfinder Press.

Hirson is a surname. Notable people with the surname include:

Edward Grant was a South African Trotskyist who spent most of his adult life in Britain. He was a founding member of the group Militant and later Socialist Appeal.

Orthodox Trotskyism is a branch of Trotskyism which aims to adhere more closely to the philosophy, methods and positions of Leon Trotsky and the early Fourth International, Vladimir Lenin and Karl Marx than other Trotskyists.

Isaac Bangani Tabata (1909-1990), also known as "I.B" or "Tabby", was a South African political activist, author and orator. A Marxist in the Trotskyist tradition, he was central to the Non-European Unity Movement from its inception in 1943, as well as in the African Peoples' Democratic Union of Southern Africa (APDUSA) formed 1961. He is notable for his innovative analyses, theoretical work and lifelong commitment to the movement. Tabata was married to Jane Gool, a major political activist.