Tru was a French restaurant located in the Streeterville neighborhood in Chicago. Tru was opened in 1999 by Rick Tramonto and Gale Gand with the backing of Rich Melman's Lettuce Entertain You Enterprises. It was a Michelin one-star restaurant since the Chicago guidebook's inception in 2011; in 2017 the restaurant was awarded two Michelin stars. [1] Since 2008, the Executive Chef was Anthony Martin. The restaurant closed on October 7, 2017. [2] [3]

The restaurant received a Michelin Star from the Michelin Guide every year since Chicago's debut guide in 2011, and two Michelin stars in 2017. [4] In 2013, Tru was once again awarded 5 diamonds from the American Automobile Association. [5] Since 2004, the restaurant has been a recipient of the Wine Spectator Grand Award. [6]

On September 5, 2017, Lettuce Entertain You Enterprises announced Tru would be serving its last service on Saturday, October 7, 2017. [7] 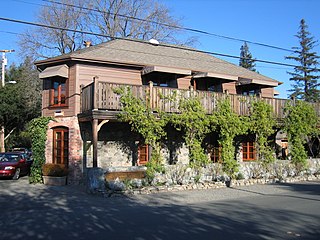 Maggiano's Little Italy is an American casual dining restaurant chain specializing in Italian-American cuisine. The company was founded in Chicago's River North neighborhood, at Clark Street and Grand Avenue, in 1991 by Rich Melman's Lettuce Entertain You Enterprises (LEYE), and was named after Melman's late partner, Marvin Magid. The concept was acquired by Brinker International, Inc. in August 1995 from Lettuce Entertain You Enterprises. As of March 22, 2021, there were 54 locations throughout 22 states and the District of Columbia.

Alinea is a restaurant in Chicago, Illinois, United States. In 2010, Alinea was awarded three stars from the Michelin Guide. As of April 2021, Alinea is the only Chicago restaurant to retain a three-star status, Michelin's highest accolade.

Rich Melman is an American businessman, and the founder and chairman of Lettuce Entertain You Enterprises, a privately held restaurant company with more than 100 venues.

Lettuce Entertain You Enterprises (LEYE) is a restaurant group currently comprising 120 or more restaurants mainly located in the Chicago metropolitan area. It was founded by Rich Melman and Jerry A. Orzoff in 1971.

Richard Michael "Rick" Tramonto is a Chicago chef and cookbook author. He was executive chef and partner in Tru, a contemporary fine-dining restaurant from Lettuce Entertain You Enterprises.

The Pump Room was a restaurant established on October 1, 1938 by Ernie Byfield and closed in 2017. It was located in the Ambassador Chicago hotel, formerly known as the Ambassador East, on the northeast corner of State Parkway and Goethe Street in Chicago's Gold Coast area.

Gale Gand is a Chicago-based pastry chef, cookbook author, television personality, and winner of the 2001 James Beard Foundation Award for Outstanding Pastry Chef. Gand was the host of the Food Network show Sweet Dreams. She was the Chef-in-Residence at Elawa Farm, in Lake Forest, Illinois. Gand is a partner and was the founding Executive Pastry Chef at Tru, a contemporary fine-dining restaurant affiliated with Lettuce Entertain You Enterprises. Gand and her partners at Tru won the 2007 James Beard Foundation Award for Service. She has blogged for the Huffington Post, was a contestant on Iron Chef America in the 2006–2007 season, and was a judge on Bravo's Top Chef in 2008 for the episode Wedding Wars. Gand was also featured on the Great Chefs television program.

Sixteen was an American restaurant on the sixteenth floor of the Trump International Hotel and Tower in the Near North Side community area of Chicago. It was one of three food and dining options in the hotel's room service offering. Sixteen opened in early February 2008, and an adjoining outdoor patio terrace, named The Terrace at T, opened on June 25, 2009 following the completion of the hotel's construction.

L2O was a Chicago seafood restaurant opened in 2008 by chef Laurent Gras and owned and operated by Lettuce Entertain You Enterprises. The name of the restaurant stands for Lake to Ocean. The restaurant was located at 2300 N. Lincoln Park West, Chicago, IL 60614.

Per Se is a New American and French restaurant located on the fourth floor of the Time Warner Center at 10 Columbus Circle in Manhattan in New York City, owned by chef Thomas Keller. The Chef de Cuisine is Chad Palagi. Per se has maintained three Michelin stars since the introduction of the New York City Guide in 2006.

Picasso is a two Michelin star restaurant run by chef Julian Serrano in Las Vegas, Nevada, United States. The name is derived from the artist Pablo Picasso and features the artist's paintings throughout the restaurant. The cuisine of Picasso is French with a Spanish influence, and the restaurant is known for its reinvention and interpretation of these cuisines. Today, the restaurant holds two Michelin stars, the AAA Five-Diamond Award, a 28/30 rating from the Zagat guide, the Wine Spectator Grand Award since 2001, and is considered to be one of the finest restaurants in the United States. 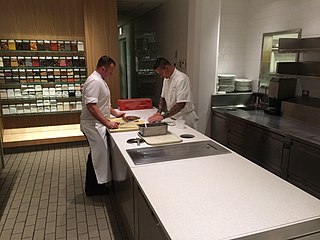 Grace was a restaurant in the West Loop neighborhood in Chicago, Illinois, United States. It had been ranked 3 stars by the Michelin Guide each year since 2015. Before closing on December 20, 2017, Alinea and Grace were the only Chicago restaurants with three Michelin stars.

Mon Ami Gabi is a chain of French bistros in the United States operated by Lettuce Entertain You Enterprises. Mon Ami Gabi has five locations, with the original located in Lincoln Park, Chicago.

Belinda Chang is a James Beard Award winning American sommelier, writer, and restaurateur. Chang has been the wine and service director for multiple critically acclaimed restaurants in Chicago, San Francisco, and New York City. She has authored wine notes for several cookbooks, including Charlie Trotter’s Meat and Game, and as a host on the Fine Living Network. 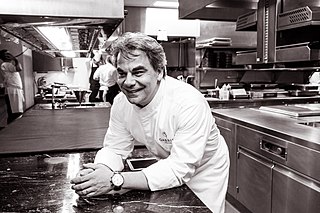 Gabriel Kreuther is a two-Michelin-star restaurant at W. R. Grace Building at 41 West 42nd Street across from Bryant Park, named after its chef and owner Gabriel Kreuther. It was originally a one-star Michelin restaurant in its opening years and was subsequently awarded two stars in 2019. The restaurant specializes in modern Alsatian food with other French, German, and American influences. Their most famous dish is a sturgeon & sauerkraut tart with a caviar mousseline smoked in applewood. The restaurant also serves multiple house breads including a savory kugelhopf with scallions and chive fromage blanc. Relais & Châteaux as well as entities such as Wine Enthusiast Magazine and Wine Spectator praised their varied wine list primarily featuring wines from all over France/Germany along with other countries. Along with wine, their drinks include a variety of modern cocktails and traditional drinks from the chef's home region including schnapps. Their wine director is Philippe Sauriat.