Trust Feed is a small rural town in Umgungundlovu District Municipality in the KwaZulu-Natal province of South Africa.

The 1988 Trust Feed massacre, in which 11 people were shot dead by police, was significant in that it was one of the first cases of political violence in which the involvement of senior police officers was proven. [2] At the time, the massacre was taken as evidence for allegations of so-called Third Force activity. [3] The officer convicted of ordering the killings later became the first member of the apartheid security forces to be granted amnesty by the Truth and Reconciliation Commission. [4]

During apartheid, under the Group Areas Act, Trust Feed was what was called a "black spot" – a primarily black town in a white area – and thus a likely target for forced removals. [5] In 1982, the Trust Feed Crisis Committee, a residents' association, was established to organise against the threat of forced removals in Trust Feed. That threat was conclusively removed in March 1988, when Trust Feed was designated a black development area. [6] By that time, the Crisis Committee effectively ran and controlled the town. [5] [7] It had some success in organising the development of the town's infrastructure: in 1982, the Trust Feed population had shared three taps and one school; by late 1988, the roads and water supply had been improved, and a clinic was under construction. [6]

However, the Crisis Committee was reportedly aligned to the United Democratic Front (UDF), [5] [7] and Trust Feed is close to Pietermaritzburg in a region which was affected from the mid-1980s by power struggles and conflict between Inkatha and the African National Congress-aligned UDF. [5] [7] By 1988, Inkatha was actively recruiting in and around Trust Feed, leading to violence that allegedly resulted in deaths among both Inkatha and UDF supporters. [4] [6]

In late November 1988, a state of emergency was declared in Trust Feed, meaning that journalists were prohibited from entering the town. [8] On the night of 2 December, several leaders of the Crisis Committee were detained and their houses searched and destroyed. [5] [7]

Around 3 a.m. on 3 December, a police squad entered house TF83, which officers believed to be the site of a funeral vigil attended by UDF members. They opened fire, killing 11 people – three men, six women, and two children, aged nine and four. [7] Two others were injured but survived because they were shielded by other bodies. [7] [6]

When it emerged that the victims were in fact IFP supporters, the police blamed the massacre on the UDF. Hundreds of UDF supporters fled Trust Feed, fearing an outbreak of political violence, [5] [7] and the town's population is estimated to have dropped by about a third by 1990. [6] The Trust Feed Crisis Committee was dissolved. [6]

The killings were carried out by four Zulu special constables in the South African Police, under the orders of Captain Brian Mitchell, who was commander of the nearby New Hanover police station and head of the local Joint Management Committee. [5] [7] [8] In court, Mitchell testified that the massacre was part of a larger state effort, supported by the security forces, to empower Inkatha at the expense of the ANC and UDF. [7] Others alleged that the local Inkatha branch had been cooperating with the police to this end, [2] and the Truth and Reconciliation Commission found that at least one senior Inkatha member had been involved in planning the attack. [9]

The police's involvement in the murder was uncovered and investigated by another police captain, Frank Dutton, in 1990. [5] Following a criminal trial, Mitchell was given eleven death sentences in late April 1992. The four special constables were sentenced to fifteen years' imprisonment each, and two white officers were acquitted. [7] [9] Mitchell's sentence was commuted to life imprisonment in April 1994 by President F. W de Klerk, and he was released from prison in November 1996 after being granted amnesty by the Truth and Reconciliation Commission on the grounds that the massacre was politically motivated. [9] Mitchell committed to help rebuild Trust Feed and, after his release, he met with the community to ask their forgiveness in a televised "reconciliation meeting." [10]

The Truth and Reconciliation Commission (TRC) was a court-like restorative justice body assembled in South Africa in 1996 after the end of apartheid. Authorised by Nelson Mandela and chaired by Desmond Tutu, the commission invited witnesses who were identified as victims of gross human rights violations to give statements about their experiences, and selected some for public hearings. Perpetrators of violence could also give testimony and request amnesty from both civil and criminal prosecution.

The Pebco Three were three black South African anti-apartheid activists – Sipho Hashe, Champion Galela, and Qaqawuli Godolozi – who were abducted and subsequently murdered in 1985 by members of the South African security police.

The Saint James Church massacre was a massacre perpetrated on St James Church of England in South Africa in Kenilworth, Cape Town, South Africa, on 25 July 1993 by four members of the Azanian People's Liberation Army (APLA). Eleven members of the congregation were killed and 58 wounded. In 1998 the attackers were granted amnesty for their acts by the Truth and Reconciliation Commission.

The Battle of Ventersdorp was a violent confrontation on 9 August 1991 in the South African town of Ventersdorp between supporters of the far-right Afrikaner Weerstandsbeweging (AWB) and the South African Police and security forces. Though technically not a "battle", it became known as such in the media while official sources such as the Truth and Reconciliation Commission (TRC) simply refer to it as an "incident". Much of its notoriety lies in the fact that it marked the first occasion the South African security forces used lethal force against right-wing white protesters since the National Party's ascension to power in 1948.

The Church Street bombing was a car bomb attack on 20 May 1983 in the South African capital Pretoria by uMkhonto we Sizwe (MK), the paramilitary wing of the African National Congress. The bombing killed 19 people, including the two perpetrators, and wounded 217. The Church Street Bombing was the most deadly attack by the ANC against South Africa's ruling National Party.

The Shell House massacre was a 1994 shooting incident that took place at Shell House, the headquarters of the African National Congress (ANC), in central Johannesburg, South Africa in the lead up to the 1994 elections. 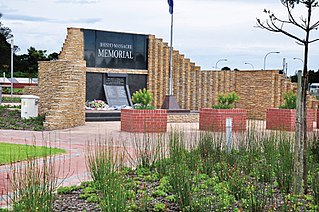 The Bisho massacre occurred on 7 September 1992 in Bisho, in the then nominally independent homeland of Ciskei which is now part of the Eastern Cape in South Africa. Twenty-eight African National Congress supporters and one soldier were shot dead by the Ciskei Defence Force during a protest march when they attempted to enter Bisho to demand the reincorporation of Ciskei into South Africa during the final years of apartheid.

Operation Marion was a domestic military operation by the South African Defence Force (SADF) during the 1980s. Afrikaner security was deemed to be closely linked to Zulu security.

The South African Civil Cooperation Bureau (CCB), was a government-sponsored counterinsurgency unit, during the apartheid era. The CCB, operated under the authority of Defence Minister General Magnus Malan. The Truth and Reconciliation Committee, pronounced the CCB guilty of numerous killings, and suspected more killings.

The Boipatong massacre took place on the night of 17 June 1992 in the township of Boipatong, South Africa.

Frank Kennan Dutton SCOB was a South African police officer. The dominant theme in his career was the investigation and prosecution of people guilty of committing war crimes and crimes against humanity during South Africa's apartheid era. Dutton's work took place in South Africa as well as abroad. In South Africa, he helped expose the apartheid military's destabilization machinery, and later headed the Scorpions, the country's elite police force. He also worked with the International Criminal Tribunal for the former Yugoslavia.

James Seipei, also known as Stompie Moeketsi or Stompie Sepei, was a teenage United Democratic Front (UDF) activist from Parys in South Africa. He and three other boys were kidnapped on 29 December 1988 by members of Winnie Mandela's bodyguards, known as the Mandela United Football Club. Moeketsi was murdered on 1 January 1989, the only one of the boys to be killed.

Boipatong Vanderbijlpark is a township in Gauteng, South Africa. It was established in 1955 to house black residents who worked in Vanderbijlpark and Vereeniging.

Lieutenant-General Pierre Derksen Steyn is a retired South African Air Force officer who served as Secretary for Defence from 1994 to 1998, and as Chief of Defence Force Staff from 1990 to 1993. He is also known as the chair of the Steyn Commission, which from 1992 to 1993 investigated allegations of criminal and third force activity by the apartheid-era South African Defence Force.

Siphiwe Mvuyane was a South African police officer who died on 9 May 1993. During the period of "low intensity warfare" in South Africa which largely pitted the African National Congress (ANC) and Inkatha Freedom Party (IFP), Siphiwe Mvuyane was on the side of the IFP. During the period of the "low intensity warfare", the IFP was the sole ruling party of the Bantustan KwaZulu government, and worked in collaboration with the apartheid government, whereas the ANC was operating underground; as a result the IFP had an upper hand over the ANC when it came to the warfare. But post apartheid, the African National Congress (ANC) became the governing party in South Africa whereas the Inkatha Freedom Party (IFP) became one of the opposition parties in the South African parliament, as a result the ANC gained the upper hand over the IFP in the remaining years of the warfare as the ANC was in control of the state apparatus by virtue of being the governing party. The IFP leadership denied its involvement in sanctioning and orchestrating political violence in the furtherance of its political objectives during the period of the "low intensity warfare" in South Africa.

Chris Hani, General-Secretary of the South African Communist Party (SACP), was assassinated by anti-communist extremist Janusz Waluś on 10 April 1993. The assassination, later tied to members within the Conservative Party, occurred outside Hani's home in Dawn Park during a peak period of progressive anti-apartheid momentum in South Africa. After the assassination, racially fuelled riots drew international attention to the instability of the political division within South Africa, leading to an inclusive national democratic election in April 1994, won by the African National Congress (ANC). Assassin Janusz Waluś and accomplice Clive Derby-Lewis were sentenced to death after their arrest in 1993, however this sentencing was later commuted to life imprisonment.

The Security Branch of the South African Police, established in 1947 as the Special Branch, was the security police apparatus of the apartheid state in South Africa. From the 1960s to the 1980s, it was one of the three main state entities responsible for intelligence gathering, the others being the Bureau for State Security and the Military Intelligence division of the South African Defence Force. In 1987, at its peak, the Security Branch accounted for only thirteen percent of police personnel, but it wielded great influence as the "elite" service of the police.