The Union Railway Car Barn is an historic building at 613-621 Cambridge Street in Cambridge, Massachusetts. It is a large brick ​2 1⁄2-story building, with a distinctive round-arch central window and a stepped brick cornice. Its ground floor has been converted to a retail storefront. It was built in 1869 to house the horse-drawn streetcars of the Union Railway Company, founded in 1855. It is the only surviving car barn of three built by the company in Cambridge, and a rare surviving element of the city's 19th-century transportation infrastructure. [2] 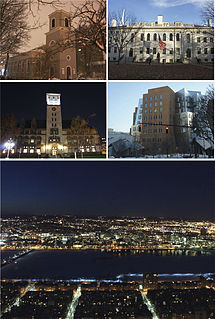 The building was listed on the National Register of Historic Places in 1982. [1]

The Spencer–Peirce–Little Farm is a Colonial American farm located at 5 Little's Lane, Newbury, Massachusetts, United States, in the midst of 231 acres (93 ha) of open land bordering the Merrimack River and Plum Island Sound. The farmhouse, dating to c. 1690, was designated a National Historic Landmark in 1968 as an extremely rare 17th-century stone house in New England. It is now a nonprofit museum owned and operated by Historic New England and open to the public several days a week during the warmer months; an admission fee is charged for non Members.

The James B. Barnes House is an historic house at 109 Hampshire Street, Cambridge, Massachusetts. Built in 1824 and moved to its present location in 1984, it is one of the only brick Federal-style houses left in Cambridge, and is a rare survivor of the early period of development in East Cambridge. It was listed on the National Register of Historic Places in 1982. 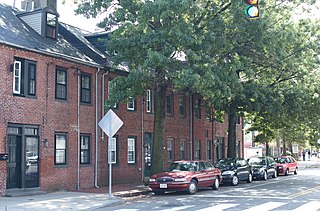 The Bottle House Block is a brick rowhouse at 204-214 3rd Street in Cambridge, Massachusetts. It was built in 1826 as a tavern by Deming Jarves, owner of the New England Glass Company, and was identified as the "Bottle House Block" from its earliest days. The building is the third oldest in East Cambridge and one of a few surviving brick buildings in Cambridge from that period. At the time of its construction it stood on the main road from the West Boston Bridge to Old Cambridge.

The Union Street Railway Carbarn, Repair Shop is a historic transit maintenance facility at 1959 Purchase Street in New Bedford, Massachusetts. Built in 1910, the carbarn was the center of the New Bedford's streetcar network, which operated from 1872 to 1947. The carbarn is a large single-story brick building, occupying nearly half of a city block. The adjacent repair shop building, a single story brick and wood building, was built in 1897; it was demolished sometime between 1978 and 2003.

The Municipal Group Historic District is a historic district encompassing a cluster of five municipal buildings in the Hyannis village of Barnstable, Massachusetts. Included are the library, old town hall (1926), two buildings currently housing town offices that were originally part of the Hyannis Normal School, and the Crowell/Guyer Barn, a 19th-century structure now used by the local public works department. The district was listed on the National Register of Historic Places in 1987.

The Springfield Steam Power Company Block is a historic industrial building at 51-59 Taylor Street in downtown Springfield, Massachusetts. Built in 1881, it is a surviving example of a late 19th-century power distribution component, part of a scheme by the Springfield Steam Power Company to deliver steam power to nearby industrial facilities. The block was listed on the National Register of Historic Places in 1983. Its ground floor now houses retail operations.

The North Canal Historic District of Lawrence, Massachusetts, encompasses the historic industrial heart of the city. It is centered on the North Canal and the Great Stone Dam, which provided the waterpower for its many mill complexes. The canal was listed on the National Register of Historic Places in 1975, while the district was first listed in 1984, and then expanded slightly in 2009. 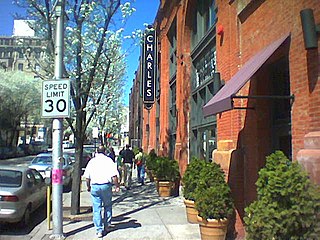 Baltimore City Passenger Railway Power House and Car Barn, also known as the Charles Theatre, is a historic street railway building located at Baltimore, Maryland, United States. It is a two-story brick Romanesque Revival style building, constructed in 1892, that has been altered for a variety of uses over the years. The southern half of the building was used for the power house; the northern half was used for the car barn. It was constructed by Baltimore's oldest streetcar company to provide cable traction on one of its first and most important lines. The car barn was the node where the Baltimore & Northern Railway transferred its streetcars to City Passenger tracks. In 1939 the United Railways and Electric Company sold the structure and it was then converted into a theater, bowling alley, and ballroom.

There are two historic Salisbury Factory Buildings in Worcester, Massachusetts. The first of these, at 25 Union Street, was built in 1879, and is a five-story brick building with modest Victorian Gothic trim. The second, at 49-51 Union Street, was built in 1882, is a three-story brick building designed by local architect Stephen Earle. These two buildings are the only ones that survive of a series of factory buildings built by Stephen Salisbury II and Stephen Salisbury III in the Lincoln Square area north of Worcester's downtown. The Salisburys rented space out to small manufacturers in these buildings, introducing a trend that dominated the industrial development of the city. Most of their buildings were demolished during redevelopment of the area in the 20th century. 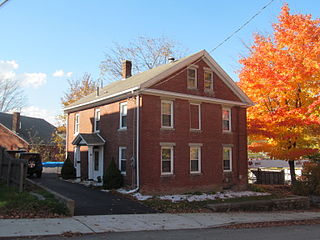 The Hamilton Mill Brick House is a historic house at 16 High Street in Southbridge, Massachusetts. Built c. 1855 by the Hamilton Woolen Mill Company, it is one of a small number of brick company housing units to survive from that time. The house was listed on the National Register of Historic Places on June 22, 1989.

The Newton Street Railway Carbarn is an historic building located at 1121 Washington Street in the village of West Newton in Newton, Massachusetts. Built in 1890 by the Newton Street Railway Company, it is a rare surviving example of a wood-frame trolley car garage facility, a facility once common in areas served by electrified trolleys. The building has a long two-story central section with extended single-story wings. It has been extensively remodeled and modernized and is now a commercial building with a restaurant, grocery store, and offices. 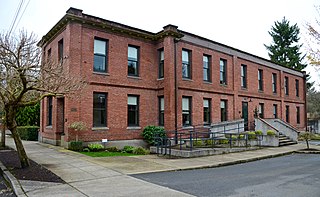 The Portland Railway, Light and Power Sellwood Division Carbarn Office and Clubhouse, also known as Carmen's Clubhouse, in southeast Portland in the U.S. state of Oregon, is a former commercial transportation building listed on the National Register of Historic Places (NRHP). Built in 1910 by the Portland Railway, Light and Power Company (PRL&P), it was added to the register in 2002. The structure was associated with Portland's street railway and interurban system of the late 19th and early 20th centuries.

The Roslindale Substation is a historic electrical substation building at 4228 Washington Street in the center of the Roslindale village of Boston, Massachusetts. The brick Classical Revival building was constructed in 1911 by the Boston Elevated Railway (BERy), a predecessor to today's MBTA. The monumental building is 80 feet (24 m) long, 50 feet (15 m) wide, and 46 feet (14 m) high. The building was designed by Robert S. Peabody of Peabody and Stearns, and built by Stone & Webster. The building was use by the Boston Elevated and its successors to provide AC to DC conversion for street cars until 1971. It is one of four substations built by the BERy to survive. The building was vacant from 1971 until January 14, 2017 when a craft-beer store opened in the basement. In November of 2017, Canton, Massachusetts based Trillium Brewing Company opened a beer garden on the street-level of the building. 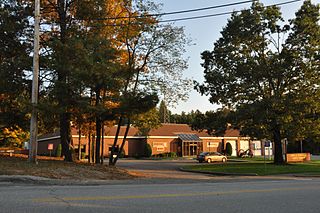 The Plaistow Carhouse is a historic trolley barn at 27 Elm Street in Plaistow, New Hampshire. Built in 1901, it is a surviving reminder of a short-lived trolley service that served the town until 1930. The building now houses the town's police and fire departments. It was listed on the National Register of Historic Places in 1980.

Niagara Frontier Transit Buildings, also known as the Buffalo East Side Railway Co. Horse and Car Barn, was a set of historic transit-related buildings located at Buffalo, Erie County, New York. They were built between about 1881 and 1883, and consisted of two interconnected Italianate style brick buildings. They were built by the Buffalo East Side Railway Company to stable its horse and horse-drawn streetcars. It later housed electric trolleys of the International Railway Company and buses of the Niagara Frontier Transportation Authority. The buildings have been demolished.

The West Ankeny Car Barns Bay E is a former streetcar carbarn in Portland, Oregon, that is listed on the U.S. National Register of Historic Places. Completed in 1911, it was one of three buildings that collectively made up the Ankeny Car Barns complex of the Portland Railway, Light and Power Company (PRL&P), the owner and operator of Portland's streetcar system at the time. By 1978, the brick building had become the only surviving structure from the Ankeny complex and one of only two surviving remnants of carbarn complexes of the Portland area's large street railway and interurban system of the past, the other being the PRL&P's Sellwood Division Carbarn Office and Clubhouse.

The Redlands Central Railway Company car barn is a historic car barn located at 746 East Citrus Avenue in Redlands, California, United States. The building was used to house electric railway cars, first for the Redlands Central Railway and later for the Pacific Electric Railway. It is the only extant Pacific Electric car barn, and one of only two trolley barns remaining in Southern California.

The Burlington Traction Company is a historic trolley maintenance facility at Riverside Avenue and North Winooski Avenue in Burlington, Vermont. The property includes two brick trolley barns, built c. 1900 and c. 1910 respectively, that were used as public transit maintenance facilities until 1999, after which they were adaptively repurposed to other residential and commercial uses. The property was listed on the National Register of Historic Places in 2004.

The Wethersfield Avenue Car Barn, also known locally just as the Trolley Barn, is a historic trolley barn at 331 Wethersfield Avenue in Hartford, Connecticut. Built in 1902, it is the only surviving building used exclusively for the area's extensive electrified street car network in the first half of the 20th century. Now converted to other uses, it was listed on National Register of Historic Places in 1983.

The Chattanooga Car Barns is a three-building complex located at 301 Market St. in Chattanooga, Tennessee. It was built in 1887 and was listed on the National Register of Historic Places in 1979.