Union Wharf is an historic wharf at 295-353 Commercial Street in the North End of Boston, Massachusetts. The wharf began as a more modest wooden structure in the late 18th century, and was developed with a complex of granite buildings roughly between 1830 and 1850. It was one of the major centers of trade on the Port of Boston in the mid-19th century, and served as a passenger terminal later in the 19th century. [2]

The wharf and buildings were listed on the National Register of Historic Places in 1980. [1]

The Strand Historic District, also known as the Strand District, in downtown Galveston, Texas (USA), is a National Historic Landmark District of mainly Victorian era buildings that now house restaurants, antique stores, and curio shops. The area is a major tourist attraction for the island city and also plays host to two very popular seasonal festivals. It is widely considered the island's shopping and entertainment center. The district includes properties along the south side of Harborside Drive and both sides of The Strand and Mechanic Street from 20th Street westward to 26th Street.

Charles W. Morgan is an American whaling ship built in 1841 that was active during the 19th and early 20th centuries. Ships of this type were used to harvest the blubber of whales for whale oil which was commonly used in lamps. Charles W. Morgan has served as a museum ship since the 1940s and is now an exhibit at the Mystic Seaport museum in Mystic, Connecticut. She is the world's oldest surviving (non-wrecked) merchant vessel and the only surviving wooden whaling ship from the 19th century American merchant fleet, which at one time numbered 2,700 vessels. The Morgan was designated a National Historic Landmark in 1966.

Long Wharf is a historic pier in Boston, Massachusetts which once extended from State Street nearly a half-mile into Boston Harbor. Today, the much-shortened wharf functions as a dock for passenger ferries and sightseeing boats.

Mount Waldo is a small mountain about 1,060 feet (320 m) high in Waldo County, Maine. It is located in the town of Frankfort.

The Piano Row District is a historic district encompassing two blocks of buildings facing Boston Common at the corner of Tremont Street and Boylston Street in Boston, Massachusetts. The district extends along Boylston from Park Square to Tremont, and along Tremont to Avery Street. The district also includes two buildings on Tremont just south of Boylston: the Cutler Majestic Theater, and the 1925 Union Savings Bank building at 216-218 Tremont. This area was developed in the late 19th and early 20th centuries, and became known as "Piano Row" because of the concentration of music-related businesses, including several piano showrooms. The flagship store for M. Steinert and Sons, Boston's longtime Steinway dealer, has been located here since 1896, and features a fine underground performance hall, which has unfortunately been virtually abandoned due to fire codes.

Temple Place Historic District is a national historic district at 11-55, 26-58 Temple Place in Boston, Massachusetts. The district encompasses a set of fifteen well-preserved 19th and early-20th century buildings representing the increasing commercialization of the area, which was a fashionable upper-class address in the late 18th century. The earliest buildings date from the 1830s and are Greek Revival in style. Three buildings were designed by noted Boston architect Nathaniel J. Bradlee, and are rare surviving examples of his work which predate the Great Boston Fire of 1872; one building was designed by Peabody and Stearns.

The Blackstone Block Historic District encompasses what was once a waterfront business area in Boston, Massachusetts. Due to the infill of land it is now slightly inland from the waterfront. The district is bounded by Union, Hanover, Blackstone, and North Streets, not far from Quincy Market and Faneuil Hall. It includes the Union Oyster House, a National Historic Landmark building erected in the 1710s, and a collection of commercial buildings dating from the late 18th and 19th centuries. The district was added to the National Register of Historic Places in 1973. It also includes the c. 1770s Ebenezer Hancock House, a Federal-style wood-frame house that is the only building left in the city which was known to be owned by John Hancock. The building was designated a Boston Landmark by the Boston Landmarks Commission in 1978 for its notable exterior and interiors. In 1983, the surrounding ca. 1676 Blackstone Block Street Network was also designated by the Boston Landmarks Commission.

The Boston Consumptives Hospital is a historic tuberculosis hospital in the Mattapan neighborhood of Boston, Massachusetts. It consists of a complex of eighteen historic buildings on 52 acres (21 ha) of land. Most of these buildings were built between 1908 and 1932, although the Superintendent's House predates the hospital's construction; it is an Italianate house built c. 1856. They are predominantly brick buildings that are Colonial Revival in character, although the 1929 main administration building has a variety of different revival elements. Several of the buildings on the campus—The Administrative or Foley Building; The Doctor's Residences, Dormitories and Wards; and The Power House—were designed by the renowned architectural firm Maginnis and Walsh. The complex was the largest tuberculosis hospital in the state, built in response to reports that the disease was responsible for more deaths than any other in the city. The facility was used for the treatment of tuberculosis through the middle of the 20th century, and then stood largely vacant until 2002, when plans were laid to rehabilitate the property for other uses.

The Bowditch School is an historic school building at 80—82 Green Street in the Jamaica Plain neighborhood of Boston, Massachusetts. The three story brick and granite Classical Revival building was designed by Harrison Henry Atwood, a prominent local architect, and was built in 1892. Its main facade has a projecting three-part pavilion, with square entry openings at the base, and round-arch windows at the top level, with a modillioned cornice. It is named for Nathaniel Bowditch, a noted early 19th-century astronomer and mathematician.

Custom House District is a historic district in Boston, Massachusetts, located between the Fitzgerald Expressway and Kilby Street and South Market and High and Batterymarch Streets. Named after the 1849 Boston Custom House located on State Street, the historic district contains about seventy buildings on nearly sixteen acres in Downtown Boston, consisting of 19th-century mercantile buildings along with many early 20th-century skyscrapers, including the 1915 Custom House Tower. 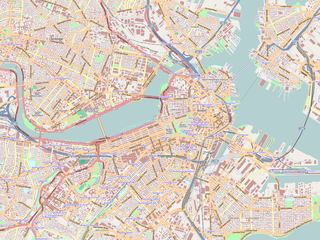 The Russia Wharf Buildings are a cluster of three stylistically similar commercial buildings at 518-540 Atlantic Avenue, 270 Congress Street and 276-290 Congress Street in Boston, Massachusetts. They are built on the original site of Russia Wharf, near where the Boston Tea Party took place in 1773. The wharf was the center of Boston's trade with Russia in the late 18th and early 19th centuries. The wharf's buildings were destroyed in the Great Boston Fire of 1872, and the land area was extended by building over the wharf and filling the spaces surrounding it. The three Renaissance Revival buildings were designed by Peabody and Stearns and built in 1897.

The Acushnet Heights Historic District is a predominantly residential historic district in central New Bedford, Massachusetts. It encompasses a densely-built urban area about 20 acres (8.1 ha) in size, which was developed as a working-class area, beginning in the 1860s, for the many workers in the city's factories. The district was listed on the National Register of Historic Places in 1989. It abuts the North Bedford Historic District, which is just to the south, and includes the following separately-listed properties: the Union Street Railway Carbarn, the Bradford Smith Building, and the Dawson Building.

Downtown Salem District is a historic district roughly bounded by Church, Central, New Derby, and Washington Streets in Salem, Massachusetts. It was added to the National Register of Historic Places in 1983, and represents a major expansion of the Old Town Hall Historic District, which was listed in 1972.

The Sudbury Center Historic District is a historic district on Concord and Old Sudbury Roads in Sudbury, Massachusetts. It was listed on the National Register of Historic Places in 1976. In 1976, it included 80 buildings over 193.6 acres (0.783 km2).

The Terminal Storage Warehouse District is located at Medford and Terminal Streets in the Charlestown neighborhood of Boston, Massachusetts. It includes three large brick warehouse buildings which were built between 1910 and 1913. They are rare surviving elements of the commercial development of the Charlestown waterfront early in the 20th century. They were built by two separate companies which had common ownership. The buildings at 40 and 50 Terminal Street were built by the Terminal Wharf & Railroad Warehouse Company, and that at 267-281 Medford Street was built by the Terminal Storage Warehouse Company. They were built to serve as storage facilities for the transhipment by rail and ship of goods through the port. The buildings were vacated in 1984, and are being rehabilitated after many years of vacancy.

The Monument Square Historic District encompasses a city park and its surrounding buildings at the top of Breed's Hill in the Charlestown neighborhood of Boston, Massachusetts. The location is notable as the site of the 1775 Battle of Bunker Hill, early in the American Revolutionary War. Monument Square was laid out in the 19th century, when the Bunker Hill Monument was erected there. The park is framed by predominantly residential buildings built in the mid-19th century.

The Theodore Lyman School is a historic former school building at 30 Gove Street in the East Boston neighborhood of Boston, Massachusetts. It is a three-story red brick building, designed by Gridley James Fox Bryant. It was built in 1869, and rebuilt after a fire severely damaged it just two years later. The school was named for Boston's fifth mayor, Theodore Lyman (1792-1849), and was a major element of East Boston's development in the mid-19th century. The school served as a public elementary school in the 1970's until damaged by fire and close in 1980. The building was converted into elderly housing in 1984. 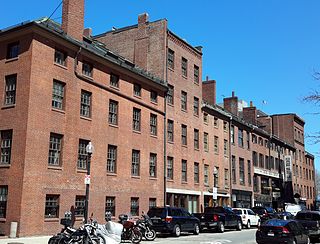 Central Wharf is a historic pier in Boston, Massachusetts. Built in 1815–1816 between Long Wharf and India Wharf, it originally extended from India Street nearly a quarter-mile into Boston Harbor. Today, the much-shortened wharf serves as the home of the New England Aquarium.