Last updated August 02, 2021
Indian film actor
In this Indian name, the name Mukundan is a patronymic, and the person should be referred to by the given name, Unni.

Unnikrishnan Mukundan commonly known as Unni Mukundan (born 22 September 1987) is an Indian actor , who predominantly appears in Malayalam films. [2] He has also acted in a few Tamil and Telugu films.

Unni Mukundan made his acting debut with the Tamil film Seedan (2011), a remake of Nandanam (2002). [3] After playing several small roles, Unni got his breakthrough with his lead role in Vysakh's action comedy Mallu Singh (2012). [4] Later, he went on to do major roles in several Malayalam films including commercially successful films like KL 10 Patthu (2015), Style (2016) and Oru Murai Vanthu Parthaya (2016). [5] He made his Tollywood debut with the 2016 film Janatha Garage . [6]

Unni Mukundan made his debut as a lyricist and singer with the film Achayans . [7] He has also sponsored road safety measures by appearing in the motor vehicle department's advertisements. [8]

Unni Mukundan was born on 22 September 1987 as the son of Mukundan Nair and Roji Mukundan. [9] He has an elder sister named Karthika. [10] Even though he is a Malayali by birth, he was brought up in Ahmedabad, Gujarat. [11] In his early days, he used to work with Motif, now known as TTEC. [12]

In 2011, Unni made his film debut in Tamil film Seedan , a remake of the Malayalam film Nandanam . [13] Unni entered the Malayalam film industry through Bombay March 12 [14] alongside Mammootty, directed by Babu Janardhanan. For his performance in Bombay March 12 , he was adjudged best newcomer by SIIMA, Asianet Film Awards, Asiavision, Jaihind TV, Amrita TV and Vanitha Film Awards. He played a supporting role in Thalsamayam Oru Penkutty , directed by T. K. Rajeev Kumar. [15] [16] [17] [18]

Unni got his turning point from the Movie Mallu Singh (2012) directed by Vyshakh. The movie became a huge hit and ran over 100 days. [19] He did cameo appearances in movies Theevram and Hitlist. In the same year, he appeared in EzhamSuryan and I love Me directed by B Unnikrishnan. [20] [21] His action sequences where well acclaimed by the audience.

In 2013 he appeared in IthuPathiramanal and Orissa, both directed by M Padmakumar. [22] Also he was seen in D Company an anthology of three independently shot action films. [23]

In 2014, he appeared in The Last Supper directed by Vinil turned out to be a flop. But in the same year, he made a comeback by playing one of the titular role along with Dulquer Salmaan in super hit movie Vikramadithyan directed by Lal Jose. [24] [25] A critic from Ibtimes wrote "Unni Mukundan has made a massive comeback with this Lal Jose directorial. He nailed his character as Vikraman, a young man with well controlled emotions and realistic attitudes". [26]

In 2015, he was seen in supporting role in the Mammootty starrer Fireman directed by Deepu Karunakaran. [27] Same year, he played the lead role in the movie Samrajyam II: Son of Alexander as Jordan, the son of Alexander who was the protagonist in the prequel. [28] He next release was KL 10 Patthu written and directed by debutant Muhsin Parari. [29]

In 2016, he did action thriller movie Style which turned out to be a decent commercial entertainer. [30] He was then seen in critically acclaimed movie Kaattum Mazhayum and fantasy romantic comedy film Oru Murai Vanthu Parthaya. [31] He made his Tollywood debut with the film Janatha Garage in an antagonistic role as Raghava, son of Sathyam (Mohanlal). [32] The film was both commercial success and critically acclaimed. It was the highest grossing Telugu films of the year. [33]

In 2017 film Achayans, he made his debut as a lyricist and singer. [34] [35] He played one of the lead role along with Jayaram and Adil Ibrahim in the movie and it turned out to be a commercial success. [36] In the same year, he was seen in another multi hero movie AvarudeRaavukal along with Asif Ali which received mixed reviews. [37] In August of the same year Clint with director Harikumar was released, in which he played the role of Joseph, father of Edmund Thomas Clint, a child prodigy known for having drawn over 25,000 paintings during his short life of seven years. He was seen in two different looks as a 35-year old and a 73-year-old man in the film. [38] For this film he received Ramu Kariat Movie Award for the Best Actor. [39] His last release of 2017 was Mammootty starrer Masterpiece in which he played the villain role and Tharangam in which he played an extended cameo. [40]

In 2018, he did Tamil-Telugu Bilingual film Bhaagamathie along with Anuskha Shetty which turned out to be both commercial success and critically acclaimed. [41] [42] His next releases were two thriller movies Ira and Chanakyathanthram. [43] Both the films received positive reviews and was commercially successful. [44]

Muhammad Kutty Panaparambil Ismail, better known by his stage name Mammootty, is an Indian film actor and producer who works predominantly in Malayalam-language cinema. In a career spanning four decades, he has acted in over 400 films, mainly in Malayalam, with several in Tamil, Telugu, Kannada, Hindi and English. His contributions to the Malayalam cinema have been praised by his contemporaries in the Indian film industry.

Lakshmi Rai, professionally credited as Raai Laxmi, is an Indian actress who, since 2005, has appeared in over 50 films in Tamil, Malayalam, Telugu, Kannada, and Hindi.

Mammootty is an Indian actor, producer and distributor who acts mainly in Malayalam films and also in Tamil, Hindi, Telugu, Kannada and English films. In a career spanning five decades, has appeared in over 400 films including cameo appearances.

Samrajyam (transl. Empire) is a 1990 Indian Malayalam-language gangster film directed by Jomon. The film stars Mammootty as Alexander, a powerful underworld don. This movie narrates the story of his rise and fall. A sequel Samrajyam II: Son of Alexander was released.

Bombay March 12 is a 2011 Malayalam–language Indian drama film based on the 1993 Bombay bomb blasts. The film marks the directorial debut of noted screenwriter Babu Janardhanan. Mammootty, Roma and Unni Mukundan play the lead roles. The narrative is in a hyperlink format. It was released in theatres on 30 June 2011. It Was Dubbed In Hindi As Hadsa Bombay March 12. 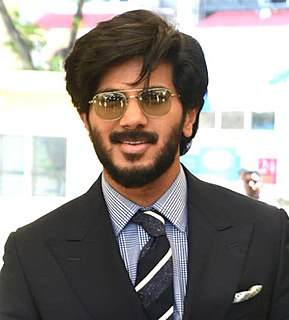 Dulquer Salmaan is an Indian actor, playback singer and film producer who predominantly works in Malayalam cinema with few Tamil films. The son of actor Mammootty, Salmaan graduated with a bachelor's degree in business management from Purdue University, and worked as a business manager before pursuing a career in acting. He is the winner of four Filmfare Awards South and one Kerala State Film Award. 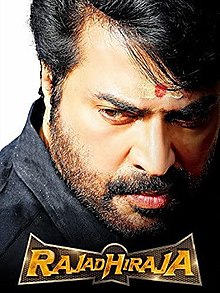 RajadhiRaja is a 2014 Malayalam action thriller film, directed by Ajai Vasudev and written by the duo of Udayakrishna-Siby K. Thomas. The film stars Mammootty and Raai Laxmi, and Joju George, Siddique, Mukesh Khanna, Joy Mathew and Lena in supporting roles. The film released on 5 September 2014 to mixed reviews.

Fireman is a 2015 Indian Malayalam-language disaster film directed by Deepu Karunakaran and produced by Milan Jaleel under the banner of Galaxy Films. It stars Mammootty, Unni Mukundan, Nyla Usha and Siddique in the lead roles. The music is composed by Rahul Raj.

Prayaga Rose Martin is an Indian film actress, who predominantly works in Malayalam cinema. She debuted as a child actor in Sagar Alias Jacky Reloaded in 2009. She made her cinematic debut with 2014, Tamil film Pisaasu, which garnered her recognition.

Avarude Ravukal is an Indian Malayalam film written and directed by Shanil Muhammed. It features Asif Ali, Unni Mukundan, Vinay Forrt, Honey Rose, Milana Nagaraj and Nedumudi Venu. It was produced by Ajay Krishnan under the banner of Ajay entertainments. The Film Released on 2017 June 23 with mixed reviews.

The Great Father is a 2017 Indian Malayalam-language thriller film directed by Haneef Adeni and produced by Prithviraj Sukumaran, Arya, Santhosh Sivan, and Shaji Nadesan under the banner of August Cinema. It stars Mammootty and Arya with Sneha, Anikha, Malavika Mohanan, Santhosh Keezhattoor, Balaji Sharma and Kalabhavan Shajon in the supporting roles. The original release date of 25 December 2016 was postponed to 30 March 2017. A dubbed version in Hindi, entitled Dashing Jiggarwala, was also released.

Achayans is a 2017 Indian Malayalam-language comedy crime thriller film directed by Kannan Thamarakkulam and written by Sethu. Starring Jayaram, Prakash Raj, Unni Mukundan, Sanju Sivram, Adil Ibrahim, Sshivada, Anu Sithara, and Amala Paul. Principal photography began in November 2016, with shooting locations being Edakochi and Vagamon. The film was released in India on 19 May 2017 with mixed reviews & a hit at box office. The film was later dubbed into Telugu as Marana Mrudangam.

Haneef Adeni is an Indian film director and screenwriter, who works in Malayalam cinema. Haneef made his directorial debut in the 2017 film The Great Father. His next venture as a screenwriter is Ameer, starring Mammooty.

Masterpiece is a 2017 Indian Malayalam-language action thriller film directed by Ajai Vasudev and written by Uday Krishna. It stars Mammootty, Unni Mukundan and Mukesh. The principal photography began on 17 April 2017 at the Fatima Mata National College, Kollam and was completed by the end of November in Kochi. Deepak Dev composed the Music of the film. The film was released on 21 December 2017.

Gokul Suresh is an Indian film actor who appears in Malayalam films. He is the son of actor-politician Suresh Gopi. He graduated with a bachelor's degree in Business Administration from Christ University and did internship at Le Méridien, Kochi before entering into cinema. In 2016, he made his acting debut with the romantic comedy Mudhugauv, which earned him a SIIMA Award for Best Debut Actor nomination. 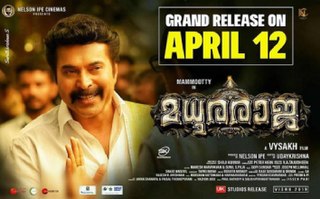 Madhura Raja is a 2019 Indian Malayalam-language action thriller film directed by Vysakh, written by Udaykrishna and starring Mammootty, Jai, Anusree and Jagapathi Babu in the lead roles alongside Vijayaraghavan, Nedumudi Venu, Salim Kumar and Mahima Nambiar in supporting roles. The music is composed by Gopi Sundar. This film marks the debut of Jai in Malayalam cinema. The film is a spin-off to 2010 film Pokkiri Raja and Mammootty reprises his role as Raja. Madhura Raja was released worldwide on 12 April 2019. 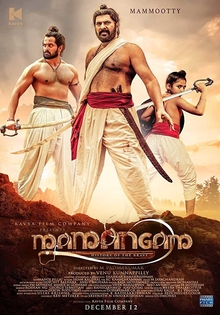 Mamangam is a 2019 Indian Malayalam-language period action film directed by M. Padmakumar, and produced by Kavya Film Company. Sajeev Pillai was the director in the first schedule, but was replaced by M. Padmakumar. It stars Mammootty, Unni Mukundan, Achuthan and Siddique. The film is about the Mamankam festival of the 18th century in the banks of the Bharathappuzha at Tirunavaya, in the Malabar region. The film follows Chaaverukal who plot to overthrow the Samoothiri.