G. V. Prakash Kumar is an Indian Tamil composer, actor, producer and singer. [3] [4] He has predominantly scored music for Tamil films and Telugu films. His first film was S Pictures' Veyyil (2006) and he became popular in Tamil cinema by the early 2010s. [5] [6] He made his debut in acting on 2015 through Darling . [7]

Prakash Kumar is the only son of G. Venkatesh and playback singer A. R. Reihana, who is the elder sister of music director A. R. Rahman. [8] He also has a younger sister named Bhavani Sre, who is an actress and appeared in films such as Ka. Pae. Ranasingam and Paava Kadhaigal.

Prakash is married to singer Saindhavi [9] and they have a daughter. [10]

He first appeared as a vocalist on the soundtrack of director S. Shankar's Tamil film Gentleman (1993), composed by his maternal uncle, A. R. Rahman. He has also contributed to some of Rahman's other projects. [11] He had also worked with Harris Jayaraj and sang two songs in Anniyan (2005) and Unnale Unnale (2007).

G.V. Prakash's introduction as a film composer was in the critically acclaimed Tamil film Veyil (2006) directed by Vasanthabalan and produced by director S. Shankar. His music in the film Madrasapattinam (2010), directed by A. L. Vijay was appreciated mainly for his song "Pookal Pookum Tharunam".

He went on to win critical acclaim for his music in Selvaraghavan's fantasy action adventure film Aayirathil Oruvan (2010) and drama film Mayakkam Enna (2011), which became his third collaboration that featured Dhanush in the lead role. The album's five songs were written by Selvaraghavan and Dhanush, with the pair also coming together to sing the song "Kadhal En Kadhal". The album also included the song "Pirai Thedum", which Prakash sang himself along with his fiancée, Saindhavi whilst another song "Voda Voda Voda", written and sung by Dhanush, was composed in just 15 minutes and recorded within an hour. [12] Rediff.com reviewed the soundtrack claiming that Prakash had "tried very hard to walk away from his comfort zone and provide the kind of edgy numbers Selvaraghavan demands, and has risen to the challenge". [13] Critics from entertainment portal Behindwoods.com cited that Prakash "reiterates his talent once again" and gave a verdict that the album is "intoxicating enough". [14] In late September 2011, a single track "Oru Murai", written by Thamarai and composed and sung by Prakash in R. S. Infotainment's Muppozhudhum Un Karpanaigal (2012) was released. His subsequent releases include the political satire Saguni (2012) and the background score of the Hindi crime film Gangs of Wasseypur . Songs of the movie Darling (2015) were hits. Especially "Vandha Mala", "Anbe Anbe" and "Sattunu Idi Mazhai".This is also the debut film for Prakash as an actor. Prakash's songs in Kaaka Muttai (2015) were massive hits. "Karuppu Karuppu" song was on charts for a few months. "Karuppu Nerathazhagi" was a huge hit from Komban (2015). G.V. Prakash signed his 50th film with director Atlee that is Vijay's 59th, which is named Theri (2016). [15]

In 2013, Prakash Kumar launched his own production house under the name "GV Prakash Kumar Productions". His first film Madha Yaanai Koottam , was directed by Vikram Sugumaran, a former assistant of Balu Mahendra. [17] [18]

In 2012, director A.R. Murugadoss approached Kumar regarding a potential acting venture. Prakash agreed to star in the project, however, the film later failed to take off. He subsequently signed on to appear in three films in quick succession, with the three entering production simultaneously. In order to further his acting ability, he took lessons from actor Aadukalam Naren and has noted that his stage performances as a singer were also helpful in demonstrating his potential as an actor. [19]

Prakash was going to make his acting debut in a film titled Pencil , opposite Sri Divya, where he will be playing a school student. [20] However, as Pencil's release was delayed, his first release became the horror film Darling . A remake of the 2013 Telugu film Prema Katha Chitram . Thereafter, Trisha Illana Nayanthara (2015). The film deals with the present day definition of love and the perspective of today’s youngsters of both genders about love, relationship, virginity etc. [21] In 2016, he appeared in Pencil and two comedies films Enakku Innoru Per Irukku and Kadavul Irukaan Kumaru . The next is Bruce Lee (2017). He acted in the climax sequence as cameo appearance with Silambarasan's Anbanavan Asaradhavan Adangadhavan (2017). In 2018, he starred in Bala's action crime Naachiyaar . He acted in second role next to Jyothika. Then the comedy-drama, Semma released on May. In 2019, he had five releases this year with Sarvam Thaala Mayam , Kuppathu Raja , Watchman , Sivappu Manjal Pachai and 100% Kadhal .

Selvaraghavan is an Indian film director and screenwriter who has directed predominantly Tamil films. He debuted with Thulluvadho Ilamai (2002) but his father is credited for business reasons, which stars his brother Dhanush, Selvaraghavan went on to make a series of romantic drama films with Kadhal Kondein (2003) and 7G Rainbow Colony (2004) before also venturing into coming-of-age films Pudhupettai (2006) and Mayakkam Enna (2011), both starring Dhanush. He has also ventured into making science fiction and fantasy films, such as depicting a fantasy Chola kingdom in Aayirathil Oruvan (2010) and a parallel universe in Irandam Ulagam (2013). He has been critically acclaimed for his directorial skills.

Pudhupettai is a 2006 Indian Tamil-language political gangster film written and directed by Selvaraghavan, starring his brother Dhanush, and Sonia Agarwal and Sneha. The film, with music scored by Yuvan Shankar Raja and cinematography by Arvind Krishna, Selvaraghavan's usual crew members, was released on 26 May 2006.The film attained cult status over the years

Aayirathil Oruvan is a 2010 Indian Tamil-language action-adventure film written and directed by Selvaraghavan and produced by R. Ravindran. The film stars Karthi, Andrea Jeremiah and Reemma Sen in the lead with Parthiepan playing a pivotal role. It revolves around three characters, Muthu (Karthi), Lavanya and Anitha who embark on an adventure to search for a missing archaeologist. It is inspired loosely by the historical decline of the Tamil Chola dynasty and the rise of the Tamil Pandya dynasty.

Aadukalam (transl. Playground) is a 2011 Indian Tamil-language action drama film directed by Vetrimaran, who also wrote the screenplay and dialogues with Vikram Sugumaran. Produced by Five Star Kathiresan and distributed by Sun Pictures, the film stars Dhanush and Taapsee Pannu in the lead roles, the latter in her film debut, with Kishore, V. I. S. Jayapalan, Naren, and Murugadoss play supporting roles. G. V. Prakash Kumar composed the film score and soundtrack, whilst Velraj and Kishore Te. handled the cinematography and editing. The film was released on 14 January 2011 to positive critical feedback. The film won six awards at the 58th National Film Awards, including Best Director, Best Screenplay and Best Actor. The film was also felicitated with five awards in 59th Filmfare Awards South – Best Film, Best Director, Best Actor, Best Music Director and Best Cinematography. Based on an online poll by The Times of India, Vetrimaran was chosen as the best director for Aadukalam. The Telugu dubbed version Pandem Kollu was released on 30 January 2015.

The Tamil Filmfare Best Male Playback Award is given by the Filmfare magazine for best playback singer as part of its annual Filmfare Awards for Tamil films. The award was first presented in 2005 with Karthik as winner. 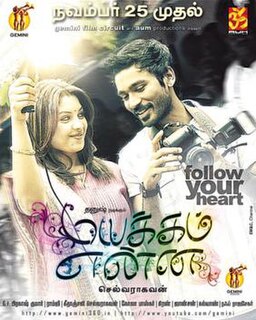 Mayakkam Enna is a 2011 Indian Tamil musical drama film written and directed by Selvaraghavan and produced by Gemini Film Circuit in association with Aum Productions Selvaraghavan its own banner. It stars his brother Dhanush, along with newcomer Richa Gangopadhyay, and features music scored by G. V. Prakash Kumar while the cinematography was handled by Ramji. Mayakkam Enna depicts the story of an aspiring wildlife photographer and his struggles in life. The film, produced and distributed by Gemini Film Circuit, was released on 25 November 2011. The film was also dubbed and released in Telugu as Mr.Karthik. 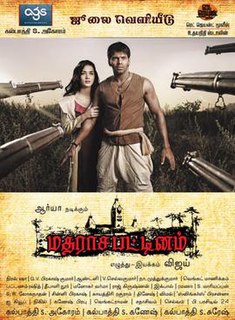 Madrasapattinam is a 2010 Indian Tamil romantic period action drama film written and directed by A. L. Vijay. The film stars Arya and Amy Jackson, in her feature film debut, while Nassar, Cochin Hanifa, Lisa Lazarus, and Alexx O'Nell play other prominent roles. The music was composed by G. V. Prakash Kumar with editing by Anthony and cinematography by Nirav Shah. The film was released on 9 July 2010 and was later dubbed into Telugu and released in Andhra Pradesh as 1947: A Love Story.The film became a box office success.

The Vijay for Best Film is given by STAR Vijay as part of its annual Vijay Awards ceremony for Tamil (Kollywood) films.

The Vijay for Best Music Director is given by STAR Vijay as part of its annual Vijay Awards ceremony for Tamil (Kollywood) films.

Richa Langella is an American former actress and model who predominantly appeared in Telugu and Tamil language films of India.

The Vijay for Favorite Song is given by STAR Vijay as part of its annual Vijay Awards ceremony for Tamil (Kollywood) films. The award is chosen through public voting. Harris Jayaraj is the most frequent winner with three wins.

Irandaam Ulagam is a 2013 Indian Tamil-language romantic fantasy film written and directed by Selvaraghavan. Starring Arya and Anushka Shetty, the film's soundtrack was composed by Harris Jayaraj, with a score composed by Anirudh Ravichander and cinematography handled by Ramji. After several months of production, the film was released worldwide on 22 November 2013.

Sunder Ramu is an Indian film and stage actor, who has also worked as a photographer. He made his first film appearance in the 2011 drama film Mayakkam Enna. After winning critical acclaim for his performance he has also gone on to feature in Aishwarya Dhanush's 3 in a pivotal role. 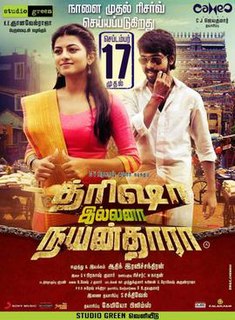 Trisha Illana Nayanthara is a 2015 Indian Tamil language adult comedy film written and directed by Adhik Ravichandran. The film features G. V. Prakash Kumar in the lead role with Simran, Manisha Yadav and Anandhi in the leading roles, with VTV Ganesh and Simran portraying supporting roles. The film was dubbed into Telugu as Trisha Leda Nayanthara.

Pooja Devariya is an Indian film and theatre actress who has appeared in the Tamil film industry. After making her film debut with Selvaraghavan's Mayakkam Enna (2011), she worked extensively in theatre with the Stray Factory, before returning to films in 2015. She finished her high school at St. Michael's Academy, in Adyar, Chennai, Tamil Nadu.

Asuran (transl. Demon) is a 2019 Indian Tamil-language period action film written and directed by Vetrimaaran and produced by Kalaipuli S. Thanu. The film is based on Poomani's novel Vekkai (transl. Heat). The film stars Dhanush and Manju Warrier, where the latter makes her Tamil debut. G. V. Prakash Kumar scored the music for the film, renewing his collaboration with Vetrimaaran. Cinematography was handled by Velraj, with editing by R. Ramar. The film's plot is influenced by the real-life Kilvenmani massacre that occurred in 1968.