Shane Nigam is an Indian film actor who appears in Malayalam films. Having made his debut with the 2013 road film Neelakasham Pachakadal Chuvanna Bhoomi (2013), he went to receive wider attention for his performances in successful drama films Kismath (2016), Parava (2017), Kumbalangi Nights (2019) and Ishq(2019).

Shane was born as eldest among three children, to Abi and Sunila, at Elamakkara, Kochi, Kerala. He did his schooling from Bhavans Vidya Mandir, Elamakkara. He was pursuing engineering at Rajagiri School of Engineering & Technology, Kochi. He has two younger sisters, Ahana and Aleena. [1] Shane's father Abi [2] [3] was an actor and popular mimicry artist.

Nigam made his acting debut with the film Annayum Rasoolum , portraying the role of Anna's (Andrea Jeremiah) brother. [4] Later Rajeev Ravi offered him the lead role in Njan Steve Lopez but didn't take up the role.

He made his debut as a lead actor in 2016 film, Kismath opposite to Shruthy Menon. Producer of the film Rajeev Ravi offered him the lead role, his character won praise among the Malayali audience and the movie was a commercial success. [5]

Nigam played a central character alongside veteran actors Amala and Manju Warrier in the 2017 film C/O Saira Banu . [6] The following year, he appeared in the romantic film Eeda which was also praised by critics. [7]

Nigam starred in two films in 2019; the comedy drama Kumbalangi Nights , which was highly successful on box office and received rave reviews from film critics and the romantic thriller Ishq , which opened to a lukewarm response to audiences and critics alike. [8]

By the end of 2019, Shane had gotten a death threat from the Malayalam film producer Joby George through his Facebook post which went so controversial. Later he altered his looks by haircut reacting to that rendered it impossible to film the continuity of his role from the movie Veyil . [9]

Fahadh Faasil is an Indian actor and producer who predominantly works in Malayalam films and few Tamil films. He has acted in more than 50 films and has received several awards, including a National Film Award, four Kerala State Film Awards and three Filmfare Awards South. Fahadh is the son of filmmaker Fazil. Fahadh began his film career at the age of 19 by starring in the leading role in his father Fazil's 2002 romantic film Kaiyethum Doorath, which was a critical and commercial failure. After a gap of 7 years, Fahadh made his comeback with the anthology film Kerala Cafe (2009), in the short film Mrityunjayam. He attained public attention for his role as Arjun in the thriller film Chaappa Kurishu (2011). Fahadh won his first Kerala State Film Award, the Best Supporting Actor Award for his performance in Chaappa Kurishu along with his performance in Akam. He achieved critical acclaim and recognition for his roles as Cyril in 22 Female Kottayam (2012) and Dr. Arun Kumar in Diamond Necklace (2012). He won his first Filmfare Award for Best Actor for his role in 22 Female Kottayam.

Sreenath Bhasi is an Indian film actor and musician who works in Malayalam films. He started his career as a Radio Jockey in Red FM 93.5. At the same time he worked as a Video Jockey. He gained recognition in the film Da Thadiya. He went to feature in numerous films because his unique charismatic acting, earning him a wide range of fan following throughout the country. He was a part of the Christian alternative metal band named Crimson Wood and is currently the vocalist of an experimental djent band from Kerala.

Vinayak Sasikumar is an Indian lyricist, who works in Malayalam cinema.

Shine Tom Chacko is an Indian actor and former assistant director who works in Malayalam cinema. After working as an assistant to director Kamal for about 9 years, he forayed into acting through the film Gaddama. He played supporting roles in several films including Ee Adutha Kaalathu, Chapters, Annayum Rasoolum and Masala Republic and played his first lead role in Binu S Kalady's fantasy-comedy film Ithihasa (2014) which dealt with body-swapping.

Syam Pushkaran is an Indian scriptwriter who works in Malayalam cinema. He is known for his collaboration with directors Aashiq Abu and Dileesh Pothan. He made his debut with Salt N' Pepper (2011), co-written with Dileesh Nair. He has written screenplays for popular films such as 22 Female Kottayam (2012), Da Thadiya (2012), Idukki Gold (2013), Iyobinte Pusthakam (2014), Rani Padmini (2015), Maheshinte Prathikaaram (2016), Mayaanadhi (2017), and Kumbalangi Nights (2019). He also served as co-director and wrote the dialogues for Thondimuthalum Driksakshiyum (2017). Pushkaran won the National Film Award for Best Screenplay for Maheshinte Prathikaram at the 64th National Film Awards (2016).

Shruthy Menon is an Indian actress, television host, professional Master of ceremonies and model. She is currently the anchor for Sonu Nigam's concerts worldwide as well as the show Ugram Ujwalam. In 2015, a topless photoshoot for a bridal magazine led to controversy in conservative India.

Soubin Shahir is an Indian film actor and director who works in Malayalam cinema. He began his film career as an assistant director in 2003 and worked under several directors. Soubin made his acting debut in 2013 with a supporting role in Annayum Rasoolum. He made his directorial debut with the drama Parava (2017). In 2018, he won the Kerala State Film Award for Best Actor for his leading role in Sudani from Nigeria, the film was also a major commercial success. 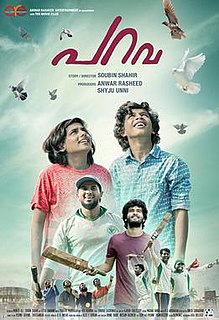 Parava (transl. Bird) is a 2017 Indian Malayalam-language drama film directed by Soubin Shahir with a script jointly written by Shahir and Muneer Ali. It is Shahir's directorial debut film and stars Amal Shah, Govind V. Pai and Shane Nigam, along with an extended guest appearance by Dulquer Salmaan. Principal photography began at Fort Kochi on 1 June 2016. The film was released on 21 September 2017.

Kismath is a 2016 Indian Malayalam-language romantic drama film written and directed by debutante Shanavas K Bavakutty. The film stars Shane Nigam as Irfan and Shruthy Menon as Anita, two star-crossed lovers from different religious backgrounds. It is produced by Rajeev Ravi under the banner of Pattam Cinema Company, and in association with LJ Films and Akbar Travels. 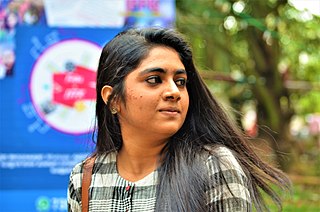 Nimisha Sajayan is an Indian actress in the Malayalam film industry. Nimisha made her acting debut with the film Thondimuthalum Driksakshiyum directed by Dileesh Pothan. She won the Kerala State Film Award for Best Actress in 2018 for her performance in Oru Kuprasidha Payyan and Chola. She is fluent in languages such as Hindi, English and Marathi, apart from her mother tongue Malayalam.

Eeda (Here) is a 2018 Indian Malayalam-language romance film written, edited and directed by B. Ajithkumar. The film is a modern take on William Shakespeare's Romeo and Juliet, set in the backdrops of political violence in Kannur, north Malabar. Shane Nigam and Nimisha Sajayan play the lead roles. Eeda was produced by Sharmila Rajaa through Delta Studio, in collaboration with Collective Phase One. The executive producers were TRS Muthukumaar, K.J. Ayyappan, and Sukumar Thekkepatt.

Kumbalangi Nights is a 2019 Indian Malayalam-language drama film directed by Madhu C. Narayanan. The directorial debut was written by Syam Pushkaran and jointly produced by Fahadh Faasil and Nazriya Nazim under their production house Fahadh Faasil and Friends, in association with Dileesh Pothan and Syam Pushkaran under Working Class Hero. The film stars Shane Nigam, Fahadh Faasil, Soubin Shahir, and Sreenath Bhasi, along with newcomers Anna Ben, Grace Antony and Mathew Thomas. Shyju Khalid was the film's cinematographer, and its soundtrack and score were composed by Sushin Shyam. Working Class Hero is a film production company partnered by Dileesh Pothan & Syam Pushkaran. The company was launched in 2018 with first project being Kumbalangi Nights in 2019 co-produced with Fahadh Faasil and Friends. Their latest production is Joji 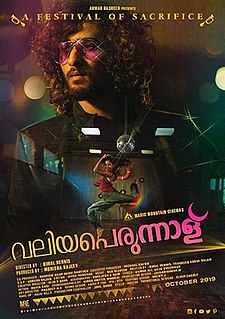 Collective Phase One is a collaboration of artists and media professionals behind films such as I.D. ,Njan Steve Lopez, Kismath, Aabhaasam, Kammatipaadam, Eeda, Run Kalyani and the upcoming Thuramukham. Collective is also involved in activities such as organic farming, theatre & music productions, acting workshops, disaster relief and rehabilitation.