Immanuel Vasanth Dinakaran (born 24 January 1983), better known as D. Imman, is an Indian film composer and singer, predominantly working in the Tamil, Hindi, Telugu, Kannada, and Malayalam film industry. His first film as music director was Thamizhan in 2002. Since then he has composed music for 100 films. [2] [3] [4] [5]

Imman was born in Chennai, India. He is the son of J. David Kirubakkara Dass, who was a teacher. Imman started playing music at a very early age. His early years were spent in Chennai and he subsequently attended Don Bosco, Egmore, Chennai and later Pachaiyappa's College. He received his Master's degree from the University of Madras.

Imman began work on music for films aged 15, apprenticing under music composers Mahesh Mahadevan and Adithyan by playing the keyboard. During the period, he also worked on private albums and his work was noticed by television serial producer Kutty Padmini , who gave him the opportunity to work on the theme song and background music for the drama Krishnadasi , which began running in 2000. [7] He subsequently began to get further work in the television circuit, garnering opportunities to score music for over 5000 episodes in shows including Kolangal, Police Diary and Mandhira Vaasal. Kutty Padmini then gave him the chance to score music and compose songs for his first feature film, Kaadhale Swasam, a romantic film featuring Karthik and Meena. However, despite a grand audio launch in November 2001, the film failed to have a theatrical release. Producer Venkateswaran, was impressed with Imman's work in the album, and gave him the opportunity to compose the music for Thamizhan (2002). [7] The album won positive reviews, with the composer also featuring the voices of the lead actors Vijay and Priyanka Chopra for a particular song. However, Imman subsequently went through another difficult period, with several of his films becoming dropped or shelved after production began and he revealed he considered a return to just being a keyboard player. [7]

Despite the success of individual songs such as "Azhagiya Asura" from Whistle (2003), he failed to garner offers for big films. [8] His next successful album was for Sundar C's masala film starring Arjun, Giri (2004), with the song Dai Kaiyaa Vechukittu being well received with the town and rural audiences. The success of the project, prompted several subsequent collaborations where Sundar C was director or where Arjun played the lead actor. Despite receiving relatively high-profile work, Imman remarked that he felt pigeonholed by the work he was getting in the period and was not approached by directors to be a part of realistic cinema ventures. [7]

The positive reviews that his work in Prabhu Solomon's Mynaa (2010) received, coupled with the film's box office success prompted bigger offers for Imman. [7] He has subsequently collaborated with Prabhu Solomon for the rest of his trilogy of romantic films, earning acclaim for his work in Kumki (2012) and Kayal (2014). Similarly he has struck a similar successful combination with director Suseenthiran, winning positive reviews for his work on Pandianadu (2013) and Jeeva (2014). [8] For the first time, he is conducting his own concert in Malaysia. [9]

He has mostly composed music for more than 20 Sun TV serials, with some becoming very famous, namely: [14] [15]

Thamizhan is a 2002 Indian Tamil-language action drama film directed by debutant Majith and produced by G. Venkateswaran. The film stars Vijay in the lead role with Priyanka Chopra, who made her debut as a lead actress in the film. Revathi, Nassar, Ashish Vidyarthi and Vivek also play pivotal roles in the film, while the film's score and soundtrack were composed by D. Imman. The story involves solving several corruption cases by a lawyer named Surya in the process fighting against a criminal boss and finally making indian law basics available as a free book to common people.

Thalai Nagaram is a 2006 Tamil action drama film directed by Suraj. The film stars director Sundar C and Jyothimayi. This film was a low-budget production and the soundtrack was composed by D. Imman. This story is a tale of a man who sacrifices his life to kick out gangsters ruining others lives. It also stars Vadivelu, Prakash Raj, Bose Venkat, Judo. K. K. Rathnam, and K. S. Ravikumar, among others. It enjoyed huge success. The soundtrack was a great hit and the song "Yedho Ninaikiren" charted at the top position for 1 week. It is a remake of the Priyadarshan-Mohanlal starrer Abhimanyu. It was remade in Kannada as Devru. 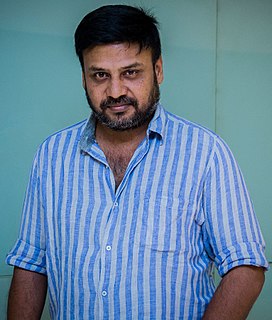 Prabhu Solomon is an Indian film director who has primarily worked on Tamil films. After making his debut in 1999, he had a middling career before rising to prominence with the success of the romantic tragedy film Mynaa (2010).

Gopisundar C. S., known professionally as Gopi Sundar is an Indian music director, programmer, singer, songwriter, actor and performer. He started his career composing music for television commercials, as has nearly 5,000 jingles to his credit. As a keyboard programmer, he has collaborated with several music directors including the composer duo Vishal–Shekhar. He made his debut as a film score composer in 2006 and went on to produce several commercially successful songs in Malayalam, Telugu, and Tamil language films.

Krishnadasi is a Tamil language soap opera aired on Sun TV. It aired from 14 February 2000 to 25 October 2002 at 7:30 PM every Monday to Friday. The show stars veteran actors Gemini Ganesan and Nagesh alongside Nalini, Vietnam Veedu Sundaram, Ranjitha, Aravind Akash and Suja Raghuram. The show was produced by Prabhoo Nepaul. It is based on the novel written by Indra Soundar Rajan. The title track was composed by D. Imman and sung by Nithyasree Mahadevan. Prabhoo Nepaul was the first Producer/Director to introduce Music Director D. Imman into the film and TV industry. It was Producer Prabhoo Nepaul who moved D. Imman's career from a musician to giving him the opportunity and chance of being a Music Director.

Kutty Padmini is a South Indian movie actress who mainly works in Kollywood. She was a child star in her debut movie Ambala Anjulam (1959). She has also acted in Telugu, Kannada, Malayalam and Hindi movies. She made her debut in Tamil cinema at the age of 3. She has acted with prominent personalities of Tamil cinema, including Sivaji Ganesan, M. G. Ramachandran, Gemini Ganesan, Jaishankar, Rajinikanth and Kamal Haasan. She was the first female artist from Tamil Nadu to win the National Film Award for Best Child Artist for the movie Kuzhandaiyum Deivamum. The first Tamil child artiste to win the award was Kamal Haasan for Kalathur Kannamma.

Dhina is an Indian film and television series composer from Tamil Nadu, India.

Edhir Paradhathu is a 1954 Indian Tamil-language film directed by Ch. Narayana Moorthy. The script was written by C. V. Sridhar, with music by Pandurangam. The film features Sivaji Ganesan and Padmini in the lead roles with Chittoor V. Nagaiah, S. V. Sahasranamam, S. Varalakshmi and Friends Ramasamy in supporting roles. The film was remade in Malayalam as Nithyakanyaka (1963), in Telugu as Ilavelpu (1956) and in Hindi as Sharada (1957). 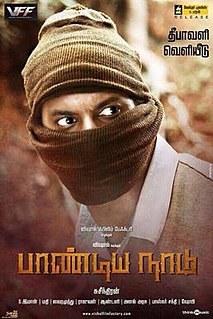 Pandiya Naadu is a 2013 Indian Tamil-language action film written and directed by Suseenthiran and produced by Vishal. The film features Vishal and Lakshmi Menon in the lead roles, while Bharathiraja, Soori, Vikranth, and Sharath Lohitashwa play other pivotal roles. The film has music composed by D. Imman with cinematography by R. Madhi and editing by Anthony. The film released on 2 November 2013. It received positive reviews and was successful at the box office. It was dubbed in Hindi as Shiva Ka Badla and in Telugu as Palnadu. The film was remade in Kannada as Rudra Tandava with Chiranjeevi Sarja.

Jilla is the feature film soundtrack of the 2014 Tamil film of the same name directed by T. Nesan starring Mohanlal, Vijay and Kajal Aggarwal in the lead roles. The film's soundtrack and Background score were composed by D. Imman which marks his first collaboration with Mohanlal and Nesan and his second collaboration with Vijay after the 2002 Tamil film Thamizhan. The soundtrack consists of 6 Tracks and 2 Karaoke Tracks whose lyrics were written by Yugabharathi, Vairamuthu and Viveka. Vijay along with Shreya Ghoshal crooned for the song Kandangi Kandangi. The audio rights of the film were purchased by Star Music. The Album was released on December 21, 2013 and received positive response from critics as well as audience.

10 Endrathukulla is a 2015 Indian Tamil-language action thriller film written and directed by Vijay Milton and produced by A. R. Murugadoss under the banner A. R. Murugadoss Productions and Fox Star Studios. The film features Vikram and Samantha Ruth Prabhu in the lead roles. Made on a budget of ₹40 crore, Principal photography and filming took place on February 2014. The film was slated to release on January 2015, but it was postponed, due to his release of I (2015). It was released on 21 October 2015, coinciding with the Dusshera festival. Despite receiving mixed reviews, the film was an average at the box office, grossing ₹42 crore worldwide. The film was dubbed into Telugu as Ten, and was released on the same day, and was also dubbed into Hindi as Dus Ka Dum.

Aambala is a 2015 Indian Tamil-language action comedy film co-written, co-produced and directed by Sundar C. Produced by Vishal, it features him in the leading role alongside an ensemble cast including Hansika Motwani, Prabhu, Vaibhav Reddy, Ramya Krishnan, Santhanam, Sathish, Kiran Rathod, Aishwarya, Maadhavi Latha, and Madhuurima. The music was composed by Hiphop Tamizha.The film got mixed to negative reviews from critics as well as audience.

Kathakali is a 2016 Indian Tamil-language action thriller film directed by Pandiraj, starring Vishal in the lead role, alongside Madhusudhan Rao, Sreejith Ravi, Mime Gopi and Catherine Tresa. Co-produced by both Pandiraj and Vishal, the film follows a man who gets blamed for the murder of a local don due to their enmity, and must now evade everyone trying to catch him.

Suryaputhri is a Tamil soap opera that aired on Kalaignar TV. The show premiered on 5 March 2012 and aired Monday through Thursday at 10:00PM IST. Later the show was shifted to the 12:30PM and 8:30PM time slot. The show starred Kutty Padmini, Nizhalgal Ravi, Santhoshi, Lavanya, and Rajkumar. It was produced by Vaishnavi Media Works Limited's Kutty Padmini and directed by Tamizh Bharati with Keerthana as the creative director. The music was composed by D. Imman. The show last aired on 19 June 2014 and ended with 448 episodes.

Kadaikutty Singam is a 2018 Indian Tamil-language action drama film written and directed by Pandiraj and produced by Suriya for, his studio 2D Entertainment. The film stars Karthi, Sayyeshaa, Arthana Binu with a supporting cast including Sathyaraj, Priya Bhavani Shankar. The film featured music composed by D. Imman and cinematography by Velraj. The film was released on 13 July 2018 along with its Telugu dubbed version, Chinna Babu.

Naai Kutty is a 2009 Indian Tamil drama film written and directed by Sathaji and produced by V. A. Durai. The film features newcomer Selvin and Nicole in lead roles, with Soori, Sippy, and Jayakumaran playing supporting roles. The film's music was composed by Vijayabharathi with cinematography by C. H. Prasath and editing by K. Thanikachalam. The film was released on 31 December 2009.