Upper Walthamstow is the easterly part of Walthamstow, London, England. [1] It occupies an area of about 0.5 square kilometers, bounded by the A406 (in the north), Wood Street and the railway track (in the west), Woodford New Road and an Epping Forest vestige (in the east), and Lea Bridge Road (in the south).

Overall it has the appearance of the general architecture of medium-small houses normal to greater London suburbs. There is some regional variation: simple modern maisonette blocks in the north, Victorian houses in the middle and 1930s terraced and semi-detached houses in the south. Dotted around throughout there are a few small mid-20th century maisonette blocks; and one tower block in the extreme south west corner, refurbished externally in the late 20th century to moderate the original 1960s tower style.

It is tree-lined, tidy, and quiet. There is a cricket pitch, church, doctors surgery, and three public houses on the edges.

From the path to the footbridge over Forest Road, near Waterworks Corner roundabout, it is possible to see three of London's tallest buildings -- 30 St Mary Axe, Tower 42, BT Tower. 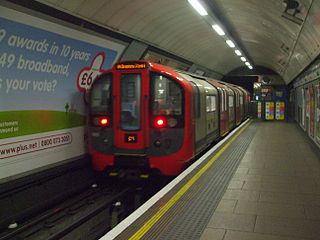 The Victoria line is a London Underground line that runs between Brixton in south London and Walthamstow Central in the north-east, via the West End. It is coloured light blue on the Tube map and is one of the only two lines on the network to run completely underground, the other being the Waterloo & City line. 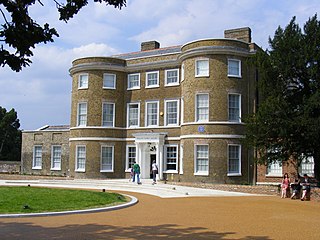 Wanstead is a district of east London, England, which is part of the London Borough of Redbridge and in the Leytonstone postal district (E11). It is located 8 miles east of Charing Cross.

The London Borough of Waltham Forest is a London borough in East London, England. Its population is estimated to be 276,983 in 2019. 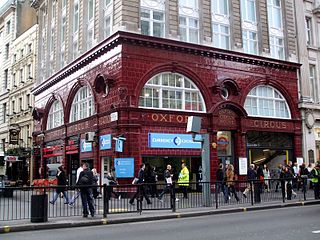 Oxford Circus is a London Underground station serving Oxford Circus at the junction of Regent Street and Oxford Street, with entrances on all four corners of the intersection. The station is an interchange between the Bakerloo, Central and Victoria lines. As of 2019, it is the 4th busiest station on the London Underground. On the Central line it is between Bond Street and Tottenham Court Road, on the Bakerloo line it is between Regent's Park and Piccadilly Circus, and on the Victoria line it is between Green Park and Warren Street. The station is in Travelcard Zone 1.

The North Circular Road is a 25.7-mile-long (41.4 km) ring road around Central London in England. It runs from Chiswick in the west to Woolwich in the east via suburban North London, connecting various suburbs and other trunk roads in the region. Together with its counterpart, the South Circular Road, it forms a ring road around central London. This ring road does not make a complete circuit of the city, being C-shaped rather than a complete loop as the crossing of the River Thames in the east is made on the Woolwich Ferry. 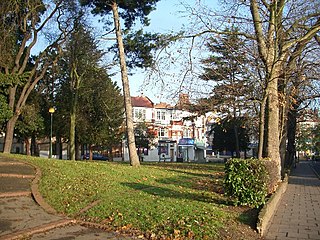 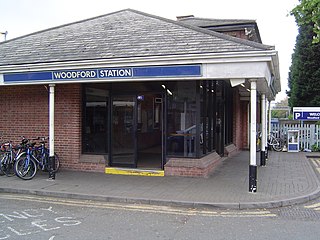 Woodford is a London Underground station in the town of Woodford in the London Borough of Redbridge, East London. The station is on the Central line, between South Woodford and Buckhurst Hill stations and is in Travelcard Zone 4. The station also acts as a terminus for services via the Hainault loop. 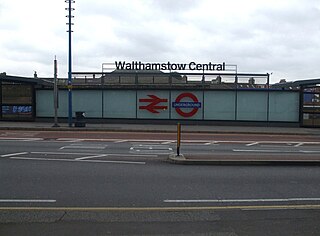 Walthamstow Central is a London Underground and National Rail interchange station in the town of Walthamstow in north-east London, England. It is the northern terminus of the Victoria line and is the second of five stations on the Chingford branch of the Lea Valley lines operated by London Overground since 2015, 6 miles 16 chains (10.0 km) from London Liverpool Street between St. James Street and Wood Street. The two lines have separate platforms at different levels. 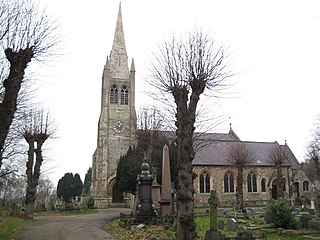 Buckhurst Hill is a town in the Epping Forest district of Essex, England. Part of the metropolitan area of London and the Greater London Urban Area, it is adjacent to the northern boundary of the London Borough of Redbridge, around 10 miles (16 km) north-east of Charing Cross. The area developed following the opening of a railway line in 1856, originally part of the Eastern Counties Railway and now on the Central line of the London Underground. 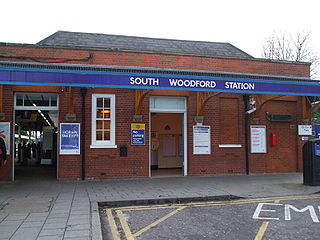 South Woodford, originally George Lane, is a London Underground station in the suburb of South Woodford in East London. It is on the Epping branch of the Central line, between Snaresbrook and Woodford stations and is in Travelcard Zone 4.

South Woodford is a suburb of London. 8.9 miles (14.3 km) north-east of Charing Cross. South Woodford, Woodford Green, Woodford Bridge and Woodford Wells form the area known as Woodford which has its origins dating back at least to the Saxon period. It came under Essex County Council until 1965 but since then has been in Greater London. It is in the historic or traditional county of Essex and E18 is in the 'London' Post Town.

Highams Park is a district of Chingford in the London Borough of Waltham Forest, England. It is a suburban area adjacent to Epping Forest and situated 8.7 miles (14 km) north-east of Charing Cross.

Lordship Lane connects Wood Green (N22) with Tottenham High Road (N17). It lies in the London Borough of Haringey and forms part of the A109 road.

The Fairlop Loop was a 6.5-mile (10 km) branch line of the Great Eastern Railway (GER). It opened to freight on 20 April 1903 and to passengers on 1 May 1903. It once connected Woodford on the Ongar branch to Ilford on the Main Line, with an eastward connection for goods, excursions and stock transfers to Seven Kings. Today it is the greater part of the Hainault Loop on London Underground's Central line. 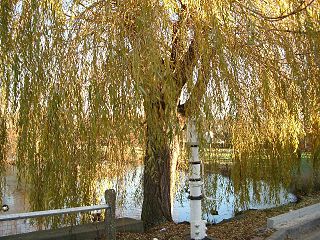 Woodford is an area of East London in the London Borough of Redbridge. It is divided into the neighbourhoods of Woodford Green, Woodford Bridge, Woodford Wells, and South Woodford. The town is situated 9.5 miles (15.3 km) northeast of Charing Cross. 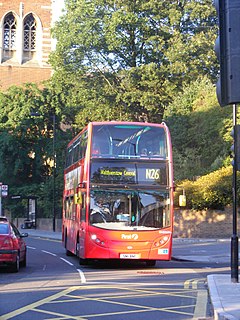 The London Night Bus network is a series of night bus routes that serve Greater London. Services broadly operate between the hours of 23:00 and 06:00.

Netherthorpe is a suburb of the City of Sheffield in England. It is one mile (1.6 km) west of the city centre. It is mostly an area of local government built housing situated on a considerable slope running downhill from the Brook Hill roundabout at a height of 107 metres towards the Shalesmoor roundabout at a height of 51 Metres over a distance of one kilometre. It is bounded by the suburbs of Upperthorpe to the north, Crookesmoor to the west and the dualled Inner Ring Road to the east. The suburb falls within the Walkley ward of the City. 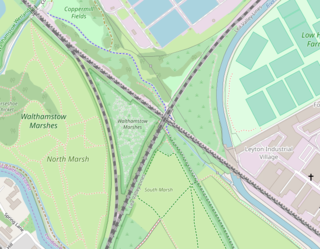 The Hall Farm Curve is a disused 500 m (1,600 ft) length of railway line in Walthamstow, east London, that connected Chingford station with Stratford station until the closure of the section of line in September 1968. The track was lifted in 1970.

Gallowgate is a neighbourhood of the city of Glasgow, Scotland. It takes its name from the major thoroughfare through the territory, which is part of the A89 road. Administratively, it is part of the Calton ward of the Glasgow City Council area.