This article lists events related to rail transport that occurred in 1948.

Rail transport or train transport is a means of transferring passengers and goods on wheeled vehicles running on rails, which are located on tracks. In contrast to road transport, where vehicles run on a prepared flat surface, rail vehicles are directionally guided by the tracks on which they run. Tracks usually consist of steel rails, installed on ties (sleepers) set in ballast, on which the rolling stock, usually fitted with metal wheels, moves. Other variations are also possible, such as slab track. This is where the rails are fastened to a concrete foundation resting on a prepared subsurface.

Nationalization, or nationalisation, is the process of transforming private assets into public assets by bringing them under the public ownership of a national government or state. Nationalization usually refers to private assets or assets owned by lower levels of government, such as municipalities, being transferred to the state. The opposites of nationalization are privatization and demutualization. When previously nationalized assets are privatized and subsequently returned to public ownership at a later stage, they are said to have undergone renationalization. Industries that are usually subject to nationalization include telephones, electric power, fossil fuels, railways, airlines, iron ore, media, postal services, banks, and water.

The Transport Act 1947 is an Act of the Parliament of the United Kingdom. Under the terms of the Act, the railway network, long-distance road haulage and various other types of transport were nationalised and handed over to a new British Transport Commission for operation. The commission was responsible to the Ministry of Transport for general transport policy, which it exercised principally through financial control of a number of executives set up to manage specified sections of the industry under schemes of delegation. 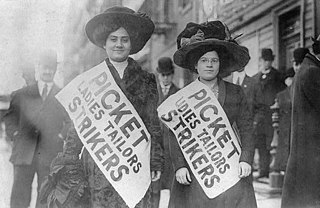 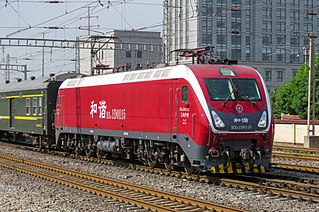 Argentina, officially the Argentine Republic, is a country located mostly in the southern half of South America. Sharing the bulk of the Southern Cone with Chile to the west, the country is also bordered by Bolivia and Paraguay to the north, Brazil to the northeast, Uruguay and the South Atlantic Ocean to the east, and the Drake Passage to the south. With a mainland area of 2,780,400 km2 (1,073,500 sq mi), Argentina is the eighth-largest country in the world, the fourth largest in the Americas, the second largest in South America after Brazil, and the largest Spanish-speaking nation. The sovereign state is subdivided into twenty-three provinces and one autonomous city, Buenos Aires, which is the federal capital of the nation as decided by Congress. The provinces and the capital have their own constitutions, but exist under a federal system. Argentina claims sovereignty over part of Antarctica, the Falkland Islands, and South Georgia and the South Sandwich Islands. 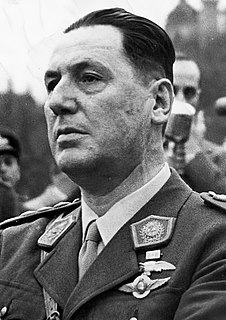 Juan Domingo Perón was an Argentine Army general and politician. After serving in several government positions, including Minister of Labor and Vice President, he was elected President of Argentina three times, serving from June 1946 to September 1955, when he was overthrown in a coup d'état, and then from October 1973 until his death in July 1974.

The Atchison, Topeka and Santa Fe Railway, often referred to as the Santa Fe or AT&SF, was one of the larger railroads in the United States. Chartered in February 1859, the railroad reached the Kansas-Colorado border in 1873 and Pueblo, Colorado, in 1876. To create a demand for its services, the railroad set up real estate offices and sold farm land from the land grants that it was awarded by Congress. Despite the name, its main line never served Santa Fe, New Mexico, as the terrain was too difficult; the town ultimately was reached by a branch line from Lamy.

The California State Railroad Museum is a museum in the state park system of California, USA, interpreting the role of the "iron horse" in connecting California to the rest of the nation. It is located in Old Sacramento at 111 I Street.

The Grand Canyon Limited was one of the named passenger trains of the Atchison, Topeka and Santa Fe Railway. It was train Nos. 23 & 24 between Chicago, Illinois, and Los Angeles, California. 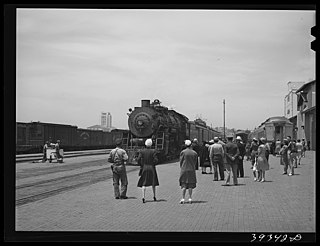 The Valley Flyer was a short-lived named passenger train of the Atchison, Topeka and Santa Fe Railway.

The GE U30CG was a passenger-hauling diesel-electric locomotive built by GE Transportation Systems. It was a passenger variant of GE's U30C design purchased by the Atchison, Topeka and Santa Fe Railway. ATSF had purchased ten U28CG locomotives in 1966, but while these locomotives were satisfactory operationally, they looked like freight locomotives, not passenger locomotives. Desiring smooth-sided passenger power, the railroad ordered the first cowl units from both GE and GM-EMD. GE produced the U30CG to meet this requirement. It was identical to a U30C except that the bodywork was replaced with a full-width long hood with fluted stainless-steel panels, and a full-width rounded nose and slanted cab front were fitted. 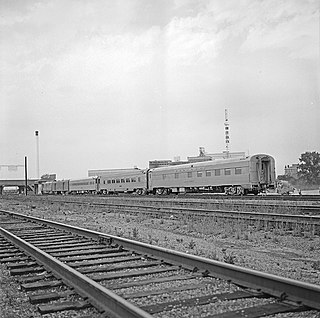 The Texas Chief was a passenger train operated by the Atchison, Topeka and Santa Fe Railway between Chicago, Illinois, and Galveston, Texas. It was the first Santa Fe "Chief" outside the Chicago–Los Angeles routes. The Santa Fe conveyed the Texas Chief to Amtrak in 1971, which renamed it the Lone Star in 1974. The train was taken off in 1979.