The 2004 AFC Asian Cup was the 13th edition of the men's AFC Asian Cup, a quadrennial international football tournament organised by the Asian Football Confederation (AFC). It was held from 17 July to 7 August 2004 in China. The defending champions Japan defeated China in the final in Beijing.

The tournament was marked by Saudi Arabia's unexpected failure to even make it out of the first round; a surprisingly good performance by Bahrain, which finished in fourth place; Jordan, which reached the quarterfinals in its first appearance and Indonesia, which gained their historical first Asian Cup win against Qatar. The final match between China and Japan was marked by post-match rioting by Chinese fans near the north gate of Beijing Workers' Stadium, in part due to controversial officiating and anti-Japanese sentiment resulting from historical tensions. [1]

The lowest-ranked 20 teams were placed in 6 preliminary qualifying groups of 3 and one group of 2, with the group winners joining the remaining 21 teams in 7 groups of 4. The top two of each of these groups qualified for the finals in China.

For a list of all squads that played in the final tournament, see 2004 AFC Asian Cup squads.

This competition saw a huge number of surprises. The first surprise named Bahrain was in group A, which, despite being just its second tournament, held on China and fellow neighbor Qatar before beating Indonesia 3–1, with the Hubail's brothers Mohamed and Ala'a instrumental in bringing Bahrain to the quarter-finals. Host China, after a shock draw to Bahrain, easily progressed to the next round after thrashing Indonesia 5–0 before Xu Yunlong scored the decisive goal in China's hard fought win over Qatar to process.

In group B, Jordan emerged as a second surprise, as the country just made its debut in the competition. Jordan surprised the whole tournament by two draws to the United Arab Emirates and, especially, a successful goalless draw to South Korea which had already finished in fourth place at the 2002 FIFA World Cup earlier, between that, Jordan shocked Kuwait with two late goals to seal a 2–0 victory, thus finishing second and progressed to the next round alongside South Korea, which, after being held by Jordan, decisively beat Kuwait and the United Arab Emirates to progress.

The two other debutants were Turkmenistan and Oman in group C and D surprised by not finishing bottom in their group, though they failed to progress. Instead, it was the two experienced Saudi Arabia and Thailand which disappointed most of fans, finishing bottom after disastrous performances. In group C, Uzbekistan also surprised by topping the group with three straight 1–0 win while Japan and Iran were able to progress in group D after a final goalless draw and better result than Oman. Iraq was the other qualifier in group C, after beating both Turkmenistan and Saudi Arabia only by one goal margin.

The quarter-finals saw Jordan caused significant problem for Japan, and Jordan was thought to have almost qualified for the semi-finals in the penalty shootout. However, four straight misses later cost Jordan's semi-final dream to end. Uzbekistan and Bahrain held on in a 2–2 draw and Bahrain prevailed after penalty shootout. Host China easily crushed Iraq 3–0, with Zheng Zhi scored two penalties to take Iraq home, while South Korea and Iran created the most phenomenon match in the tournament, an insane thriller where Iran prevailed 4–3 in what would be perceived as the greatest Asian Cup match in the history.

The first semi-final saw Iran and host China battling for the final, with both being held 1–1, despite Iran was down to ten men. China eventually won in penalty shootout. The other semi-final was another insane thriller between Bahrain and Japan, with the Japanese won after extra times thanked for a goal by Keiji Tamada in early minutes of the first half of extra times, thus sent Japan to the final against host China. Iran overcame Bahrain in a consolidating third place encounter, 4–2, to acquire bronze.

The final in Beijing saw China lost to Japan, with a controversial handball goal by Koji Nakata that sealed the game. The win meant Japan had successfully defended their title they achieved four years ago. The outcome frustrated many Chinese supporters, who ended up rioting outside Workers' Stadium over referee's controversial decision allowing the handball goal of Koji Nakata.

With five goals, A'ala Hubail and Ali Karimi are the top scorers in the tournament. In total, 96 goals were scored by 58 different players, with two of them credited as own goals.

Like other sports events, the Asian Cup 2004 was publicised as evidence of China's economic and athletic progress, being referred to by some as a prelude to the 2008 Summer Olympics. Many Chinese see the tournament as a success and take great pride in having showcased such an important sporting event in advance of the Olympic Games. However, the Japanese media and many other international observers have pointed out bad manners on the part of Chinese fans, and sparse attendance at the tournament, raising questions on China's ability to hold such sporting events. [ citation needed ]

Throughout the tournament, most Chinese fans in the stadia expressed anti-Japanese sentiments by drowning out the Japanese national anthem, displaying political banners and booing whenever Japan got the ball, regardless of the score or opponent. This was reported by the international media, and was aggravated when Koji Nakata apparently knocked in the ball with his right hand in the final against China. [4] The PRC government responded by calling for restraint and increasing police numbers to maintain order. The Japanese government also called on the PRC to ensure the safety of Japanese fans, [5] while specifically asking Japanese nationals or people of Japanese origin to not display any form of excessive pride, especially wearing Japan national football team uniforms. Despite the Chinese government's campaign, a riot started by Chinese fans broke out near the north gate of the Workers' Stadium, though reports differ as to the extent of the riot. As a result, some media groups have said that displays of "excessive Chinese nationalism during the Beijing 2008 Summer Olympics have become a cause for concern for Chinese officials".

The 2007 AFC Asian Cup qualification was held in late 2005 and the final qualification round was held from February to November 2006 with 25 nations participating.

These are the details relating to the 2008 Chinese football season.

This is a list of official football games played by Iran national football team between 2000 and 2009.

This is a record of Iraq's results at the AFC Asian Cup. Iraq have appeared in the finals of the AFC Asian Cup on 9 occasions in 1972 to 1976, 1996 to 2019. Their best ever performance is a champions in the 2007 tournament held in Indonesia, Malaysia, Thailand and Vietnam respectively.

The Thailand's representative senior football team has participated in 7 editions of the AFC Asian Cup.

The Iran men's national football team has participated in 14 editions of the AFC Asian Cup, first appearing in the 1968 Asian Cup after automatically qualifying as hosts. Overall, Iran is one of the most successful teams in Asia, having won three titles from 1968 to 1976. However, after the 1976 Asian Cup, Iran's best performance is just third place.

Jordan national football team has been historically considered weaker than other Arab teams prior to the beginning of new millennium. Jordan often struggled to win a ticket and qualify for the Asian Cup, mainly, due to historical turbulence inside the state.

China is one of the most prestigious teams in Asia, having participated in the AFC Asian Cup since 1976 and they have frequently considered as one of the contender for the Asian trophy in the tournament.

Uzbekistan is one of the most successful teams in Asia, and the most successful team in Central Asia, having qualified for every AFC Asian Cup since the fall of the Soviet Union. With a rich history of competing in the tournament, Uzbekistan is often regarded as a top team and a rising contender for the Asian Cup title. Their best performance was a fourth place finish in the 2011 tournament.

Since the AFC Asian Cup was founded, so far, Bahrain has qualified for at least six Asian Cups, starting from 1988 and since 2004 to 2019. Bahrain, in spite of lesser population, has achieved a lot of impressive results, notably beating South Korea and Qatar 2–1 in 2007 and 2015, or a thrilling match with Japan in 2004 which Bahrain lost. However, in all six appearances, Bahrain's best result is just fourth place, in 2004. Since then, Bahrain has only made the knockout stage on one other occasion, in 2019.

Ever since the collapse of Soviet Union, Turkmenistan has qualified for two Asian Cups, in 2004 and 2019.

Kuwait is one of the most successful teams in the AFC Asian Cup, having won the title once, during 1980 edition which they were awarded as host, became the first Arab team to win the Asian Cup. 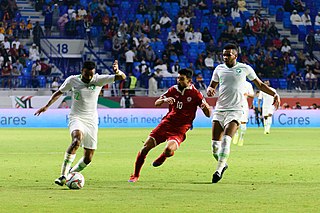 Saudi Arabia is one of the most successful teams in Asia, having won three AFC Asian Cup titles and is one of the stronger teams in the continent. With influential experiences, the Saudi team has been a major force in the Asian Cup.

Indonesia has participated in four AFC Asian Cup in their football history. Their first ever appearance was in 1996. Since then, Indonesia had repeatedly qualified for 2000, 2004 and 2007 tournaments, the latter was the first time Indonesia hosted it. Even though having a rich record, Indonesia has never progressed beyond group stage.