The 2013 European Trophy was the fourth and final season of the European Trophy, an annually held European ice hockey tournament. It was also the eighth tournament since its predecessor, the Nordic Trophy, was launched in 2006. The regulation round began on 6 August 2013 with the South Division game between Piráti Chomutov–Sparta Praha, and ended on 8 September 2013. [1] The playoffs were played between 19–22 December 2013 in Berlin. [2] The preliminary schedule for the regulation round was released on 15 April 2013. [3]

The 32 teams in the tournament were, partly based on geographical location, divided into four divisions: the West Division, the North Division, the South Division, and the East Division. Each division consisted of 8 teams who played a round-robin in their division, with an extra game against a local rival in their division, giving a total of 8 games per team. Each team was assigned four home games as well as four road games. The match-ups were nearly identical to last year, the only difference being that the home–away team assignings were switched for each game. Six teams qualified for the playoffs: Eisbären Berlin (as host), the winner of each division, and the best 2nd-placed team of all four divisions. [4]

If at least two teams in the same division or at least two 2nd-placed teams ended up tied in points, the following tie-breaker format was used: [4]

If a game was tied after regulation time (60 minutes), a 5-minute overtime period was played. During overtime, both teams substitute only 4 players on the ice at once (except for 3 when either of the teams has a penalized player). If no team scores during the overtime period, a shootout was played, starting with three penalty shots for both teams. If the shootout remains tied after the first three rounds, sudden death rounds were played until a winning team has been determined. Final standings. [6] Eisbären Berlin qualified for the playoffs as the host team.

To determine the last playoff spot (along with playoff host Eisbären Berlin and the four group winners), a ranking between the group runners-up was made, and the best runner-up got a place in the playoffs.

Final standings of runners-up of divisions:

The playoffs, known as the Red Bulls Salute, took place in the Wellblechpalast and the O2 World, Berlin between 19–22 December 2013. It was played with two groups of three teams each. The teams played a round-robin in their group, for a total of three games, and the best-seeded team from each group qualified for the Final; all other teams were eliminated from the tournament. The groups were determined by a draw taking place in Berlin on 9 September 2013. [7] The first game in each group took place in the Wellblechpalast; all other games, including the Final, were played in the O2 World. [8]

The teams in the playoffs were:

List shows the top 10 skaters sorted by points, then goals. [6]

The European Star Award was a three stars award given to the three best players in each game. The first star got three points, the second got two points, and the third got one point. List shows the top ten players based on the number of European Star Award points. [6]

Donald Clinton Jackson is an American ice hockey coach and former professional ice hockey player who played 315 games in the National Hockey League between 1978 and 1987 and began his coaching career in 1988. 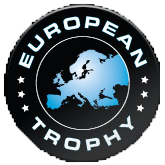 The 2010 European Trophy was a European ice hockey tournament, played between 11 August and 5 September 2010. It was the first edition of the European Trophy. The final weekend was played in Salzburg and Zell am See, with the final held at the Eisarena Salzburg, which Eisbären Berlin won 5–3 over HV71 Jönköping.

Shawn Beauchamp-Lalonde is a Canadian professional ice hockey defenceman. He is currently playing with Severstal Cherepovets of the Kontinental Hockey League (KHL).

The 2011 European Trophy was the second European Trophy, a European ice hockey tournament held annually. It was also the sixth tournament since its predecessor, the Nordic Trophy, was launched in 2006. The regulation round began on 11 August 2011 and ended on 6 September 2011. The playoffs, which took place in Austria, were played between 16–18 December 2011 in the Eisarena Salzburg in Salzburg, and the Albert Schultz Eishalle in Vienna, at the same time as the 2011 Channel One Cup. The playoff hosts, Red Bull Salzburg, won the playoffs and captured their first championship title in the European Trophy tournament, having lost in the quarterfinals last year.

The 2012 European Trophy was the third European Trophy, a European ice hockey tournament held annually. It is also the seventh tournament since its predecessor, the Nordic Trophy, was launched in 2006. The regulation round started on 31 July 2012 with the South Division game between Piráti Chomutov–Slovan Bratislava, and will end on 28 November 2012. The playoffs will be played between 13–16 December 2012 in Vienna and in Bratislava. The preliminary schedule for the regulation round was released on 12 April 2012.

This is a complete list of the regulation round games for the 2012 European Trophy, a European ice hockey tournament. The regulation round began on 31 July 2012 with the South Division game between Piráti Chomutov–Slovan Bratislava, and ended on 28 November 2012.

The Champions Hockey League is a European ice hockey tournament. Launched in the 2014–15 season by 26 clubs, 6 leagues and the International Ice Hockey Federation (IIHF), the tournament features top teams from the first-tier leagues of countries across Europe.

The 2016–17 Champions Hockey League is the third season of the Champions Hockey League, a European ice hockey tournament launched by 26 founding clubs, six leagues and the International Ice Hockey Federation (IIHF). The season started on 16 August 2016 with the group stage and ended with the final game on 7 February 2017 with Frölunda defeating HC Sparta Praha, 4–3 in overtime.

The 2017–18 Champions Hockey League is the fourth season of the Champions Hockey League, a European ice hockey tournament. The tournament was reduced to 32 teams, and qualification was on sporting merits only. The six founding leagues are represented by between three and five teams, while seven "challenge leagues" are represented by one team each. One place was reserved for the Continental Cup champion. Unlike in the three previous editions, founding teams did not automatically qualify. The season concluded with the final on 6 February 2018 at Vida Arena where JYP beat Växjö Lakers 2–0, becoming the first non-Swedish team to win the title.

The 2018–19 Champions Hockey League was the fifth season of the Champions Hockey League, a European ice hockey tournament. The tournament was competed by 32 teams, and qualification was on sporting merits only. The six founding leagues were represented by between three and five teams, while seven "challenge leagues" were represented by one team each. One place was awarded to the Continental Cup champion. Unlike in the first three editions, founding teams did not automatically qualify. The group stages began on 30 August 2018, and ended on 17 October 2018. The season had an average attendance of 3,401 per game, one percent increase from the previous season.