Ariel Kalil (born July 18, 1969) is a developmental psychologist and professor at the University of Chicago Harris School of Public Policy and the director of the Center for Human Potential and Public Policy. [1] She studies economic conditions, parenting, and child development. She is an expert in using tools from behavioral economics to influence parenting behavior. Her work has been featured in The New York Times , Slate , and The Washington Post . [2] [3] [4] Along with the Harris School's former dean Susan Mayer, Kalil is the co-director of the Behavioral Insights in Parenting Lab. [5]

Kalil was hired as an assistant professor at the University of Chicago in 1999. She was promoted to associate professor (with tenure) in 2004, and full professor in 2009. Kalil has also received the following awards:

Kalil is also a contributor to Brookings, Education Next, and Behavioral Scientist. [10] She was previously a board member of the Panel Study of Income Dynamics while at Michigan. [11] 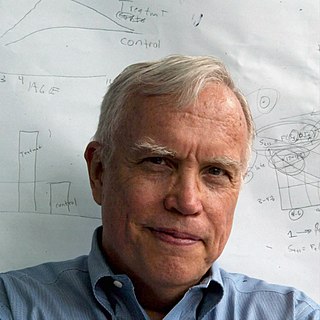 The University of Chicago Harris School of Public Policy, also referred to as "Harris Public Policy," is the public policy school of the University of Chicago in Chicago, Illinois, United States. It is located on the University's main campus in Hyde Park. The school's namesake is businessman Irving B. Harris, who made a donation that established the Harris School in 1986. In addition to policy studies and policy analysis, the school requires its students to pursue training in economics and statistics through preliminary examinations and course requirements. Harris Public Policy offers joint degrees with the Booth School of Business, Law School, School of Social Service Administration, and the Graduate Division of the Social Sciences.

Yamuna Krishnan is a professor at the Department of Chemistry, University of Chicago, where she has worked since August 2014. She was born to P.T. Krishnan and Mini in Parappanangadi, in the Malappuram district of Kerala, India. She was earlier a Reader in National Centre for Biological Sciences, Tata Institute of Fundamental Research, Bangalore, India. Krishnan won the Shanti Swarup Bhatnagar Prize for science and technology, the highest science award in India in the year 2013 in the Chemical Science category.

Daniel Diermeier is a German-American political scientist and university administrator. He is currently serving as the ninth Chancellor of Vanderbilt University. Previously, Diermeier was the David Lee Shillinglaw Distinguished Service Professor at the University of Chicago, where he also served as Provost. He succeeded Eric Isaacs on July 1, 2016, and was succeeded by Ka Yee Lee on February 1, 2020.

Jeanne Brooks-Gunn is an American developmental psychologist and professor. She is currently the Virginia and Leonard Marx Professor of Child Development at Teachers College, Columbia University.

Helen Lois Koch was an American developmental psychologist and a faculty member at the University of Texas at Austin and the University of Chicago. Koch developed nursery school teacher training programs during World War II and she researched the differences between sets of fraternal twins, identical twins and non-twin siblings.

Kathryn Paige Harden is an American psychologist and behavior geneticist. She is Professor of Psychology at the University of Texas at Austin, where she is also the leader of the Developmental Behavior Genetics lab and the co-director of the Texas Twin Project. She is also a Faculty Research Associate at the University of Texas at Austin's Population Research Center and a Jacobs Foundation research fellow.

Susan E. Mayer is a professor and former Dean of the University of Chicago's Harris School of Public Policy. She is a behavioral economist and sociologist who studies poverty and education. Her research examines the role of money in parenting outcomes. She was previously the director of Northwestern/Chicago's Joint Center on Poverty Research, and is currently the co-director of the Behavioral Insights in Parenting Lab with fellow University of Chicago professor Ariel Kalil. She served as the Dean of the Harris School of Public Policy from 2002 to 2009.

Frances Degen Horowitz was an American developmental psychologist who served as President of the Graduate Center, City University of New York from 1991 to 2005. She was instrumental in raising the stature of the institution and moving it to its current location in the B. Altman and Company Building on Fifth Avenue of New York City.

Natasha J. Cabrera is a Canadian developmental psychologist known for her research on children's cognitive and social development, focusing primarily on fathers' involvement and influence on child development, ethnic and cultural variations in parenting behaviors, and factors associated with developmental risk. She holds the position of Professor in the Department of Human Development and Quantitative Methods at the University of Maryland, College of Education, where she is Director of the Family Involvement Laboratory and affiliated with the Maryland Population Research Center. Cabrera also holds the position of Secretary on the Governing Council of the Society for the Research on Child Development and has served as Associate Editor of Early Childhood Research Quarterly and Child Development. Her research has been featured in The Wall Street Journal, Education Week, Time, and The Atlantic.

Candice Lynn Odgers is a developmental psychologist who studies adolescent and child development. Her research focuses on how early adversity and exposure to poverty and inequality shapes adolescent mental health and development. Her team team has developed new methodologies and approaches for studying health and development using mobile devices and online tools, with a focus on how digital tools and spaces can be improved to support children and adolescents. Odgers is currently a professor of Psychological Science at the University of California, Irvine and a Research Professor at Duke University. Odgers is also the Co-Director of Child Child and Brain Development Program at the Canadian Institute for Advanced Research.

Margaret Lise Gardel is an American biophysicist. She is the Horace B. Horton Professor in the Department of Physics at the University of Chicago.

Abigail Goodhue Vieregg is a professor of physics at the Enrico Fermi Institute and Kavli Institute of Cosmology, University of Chicago, specializing in neutrino astrophysics and cosmology. Her work focuses on cosmic high-energy neutrinos and mapping the cosmic microwave background.

Cassandra Cybele Raver is an American developmental psychologist currently serving as Provost and Vice Chancellor for Academic Affairs at Vanderbilt University. She previously served as Deputy Provost at New York University and Professor of Applied Psychology in the Steinhardt School of Culture, Education, and Human Development at NYU.