Unusual for a psychiatrist, Ainslie undertook experimental animal research in operant conditioning, under the guidance of Howard Rachlin. He investigated inter-temporal choice in pigeons, and was the first to demonstrate experimentally the phenomenon of preference reversal in favor of the more immediate outcomes as the choice point between two options, one delivered sooner than the other, is moved forward in time. He explained this in terms of hyperbolic discounting of future rewards, derived from ideas that Rachlin and others had developed from Richard Herrnstein's matching law. Ainslie then integrated these ideas with earlier experimental and theoretical work on inter-temporal choice, for example the studies of Walter Mischel on delay of gratification in children. In his book Picoeconomics (1992) he attempted to account for these ideas, and also facts about addiction that he was concerned with from his clinical work at the Veteran Administration Medical Center, Coatesville, Pennsylvania (where he rose to become chief psychiatrist), [1] by supposing that different parts or aspects of the personality are in conflict with one another. He grounded this idea in the Freudian theory of id, ego and superego; it became important in behavioral economics in the form of Richard Thaler's "multiple selves" theory of saving behavior. Many of Ainslie's ideas have proved to be foundational within behavioral economics, and his work (along with that of Drazen Prelec) formed a key conduit by which ideas and data from operant conditioning joined the current of work on decision making to challenge the rational choice theory that had dominated economic thinking.

In addition to his work at the Veterans Administration, Ainslie has held a position as a Clinical Professor at Temple University in Philadelphia [1]

Picoeconomics is a term used by George Ainslie in order to describe the different implications of an experimental discovery: the tendency for people to have a stronger preference for more immediate payoffs relative to later payoffs, where the tendency increases the closer to the present both payoffs are. Given two similar rewards, humans show a preference for one that arrives sooner rather than later. Humans are said to discount the value of the later reward, by a factor that increases with the length of the delay.

A large number of experiments have confirmed that spontaneous preferences by both human and nonhuman subjects follow a hyperbolic curve rather than the conventional, exponential curve that would produce consistent choice over time. [2] For instance, when offered the choice between $50 now and $100 a year from now, many people will choose the immediate $50. However, given the choice between $50 in five years or $100 in six years almost everyone will choose $100 in six years, even though that is the same choice seen at five years’ greater distance.

Intertemporal choice is the process by which people make decisions about what and how much to do at various points in time, when choices at one time influence the possibilities available at other points in time. These choices are influenced by the relative value people assign to two or more payoffs at different points in time. Most choices require decision-makers to trade off costs and benefits at different points in time. These decisions may be about saving, work effort, education, nutrition, exercise, health care and so forth. Greater preference for immediate smaller rewards has been associated with many negative outcomes ranging from lower salary to drug addiction.

In economics, time preference is the current relative valuation placed on receiving a good or some cash at an earlier date compared with receiving it at a later date. 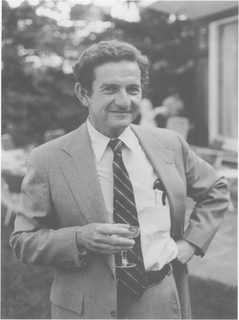 Richard Julius Herrnstein was an American psychologist at Harvard University. He was an active researcher in animal learning in the Skinnerian tradition. Herrnstein was the Edgar Pierce Professor of Psychology until his death, and previously chaired the Harvard Department of Psychology for five years. With political scientist Charles Murray, he co-wrote The Bell Curve, a controversial 1994 book on human intelligence. He was one of the founders of the Society for Quantitative Analysis of Behavior.

In economics, hyperbolic discounting is a time-inconsistent model of delay discounting. It is one of the cornerstones of behavioral economics and its brain-basis is actively being studied by neuroeconomics researchers.

In operant conditioning, the matching law is a quantitative relationship that holds between the relative rates of response and the relative rates of reinforcement in concurrent schedules of reinforcement. For example, if two response alternatives A and B are offered to an organism, the ratio of response rates to A and B equals the ratio of reinforcements yielded by each response. This law applies fairly well when non-human subjects are exposed to concurrent variable interval schedules ; its applicability in other situations is less clear, depending on the assumptions made and the details of the experimental situation. The generality of applicability of the matching law is subject of current debate.

Melioration theory in psychology is a theoretical algorithm that predicts the matching law. Melioration theory is used as an explanation for why an organism makes choices based on the rewards or reinforcers it receives. The principle of melioration states that animals will invest increasing amounts of time and/or effort into whichever alternative is better. To meliorate essentially means to "make better". 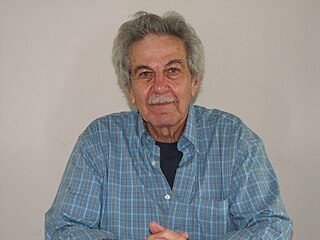 Howard Rachlin (1935–2021) was an American psychologist and the founder of teleological behaviorism. He is Emeritus Research Professor of Psychology, Department of Psychology at Stony Brook University in New York. His initial work was in the quantitative analysis of operant behavior in pigeons, on which he worked with William M. Baum, developing ideas from Richard Herrnstein's matching law. He subsequently became one of the founders of Behavioral Economics. His current research focuses on patterns of choice over time and how those patterns affect self-control, including cooperation over time. His interests in Behavioral Economics include: decision making, the prisoner's dilemma, addiction, and gambling. He was one of the first board members of the Society for Quantitative Analysis of Behavior.

Quantitative analysis of behavior is the application of mathematical models to the experimental analysis of behavior. The aim is to describe and/or predict relations between independent environmental variables and dependent behavioral variables. The parameters in the models hopefully have theoretical meaning beyond their use in fitting models to data. The field was founded by Richard Herrnstein (1961) when he introduced the matching law to quantify the behavior of organisms working on concurrent schedules of reinforcement. The field has integrated models from economics, zoology, philosophy, and other branches of psychology, especially mathematical psychology of which it is a branch. The field is represented by the Society for Quantitative Analysis of Behavior. Quantitative analysis of behavior addresses the following topics among others: behavioral economics, behavioral momentum, connectionist systems or neural networks, integration, hyperbolic discounting including the delay reduction hypothesis, foraging, hunting, errorless learning, creativity, learning, and the Rescorla-Wagner model, matching law, melioration, scalar expectancy, signal detection, neural hysteresis, and reinforcement control.

In psychology, impulsivity is a tendency to act on a whim, displaying behavior characterized by little or no forethought, reflection, or consideration of the consequences. Impulsive actions are typically "poorly conceived, prematurely expressed, unduly risky, or inappropriate to the situation that often result in undesirable consequences," which imperil long-term goals and strategies for success. Impulsivity can be classified as a multifactorial construct. A functional variety of impulsivity has also been suggested, which involves action without much forethought in appropriate situations that can and does result in desirable consequences. "When such actions have positive outcomes, they tend not to be seen as signs of impulsivity, but as indicators of boldness, quickness, spontaneity, courageousness, or unconventionality" Thus, the construct of impulsivity includes at least two independent components: first, acting without an appropriate amount of deliberation, which may or may not be functional; and second, choosing short-term gains over long-term ones.

Social preferences describe the human tendency to not only care about one's own material payoff, but also the reference group's payoff or/and the intention that leads to the payoff. Social preferences are studied extensively in behavioral and experimental economics and social psychology. Types of social preferences include altruism, fairness, reciprocity, and inequity aversion. The field of economics originally assumed that humans were rational economic actors, and as it became apparent that this was not the case, the field began to change. The research of social preferences in economics started with lab experiments in 1980, where experimental economists found subjects' behavior deviated systematically from self-interest behavior in economic games such as ultimatum game and dictator game. These experimental findings then inspired various new economic models to characterize agent's altruism, fairness and reciprocity concern between 1990 and 2010. More recently, there are growing amounts of field experiments that study the shaping of social preference and its applications throughout society.

Behavioral game theory analyzes interactive strategic decisions and behavior using the methods of game theory, experimental economics, and experimental psychology. Experiments include testing deviations from typical simplifications of economic theory such as the independence axiom and neglect of altruism, fairness, and framing effects. As a research program, the subject is a development of the last three decades.

Present bias is the tendency to rather settle for a smaller present reward than to wait for a larger future reward, in a trade-off situation. It describes the trend of overvaluing immediate rewards, while putting less worth in long-term consequences. The present bias can be used as a measure for self-control, which is a trait related to the prediction of secure life outcomes.