Astronomy & Astrophysics was formed in 1969 by the merging of several national journals of individual European countries into one comprehensive publication. [2] These journals, with their ISSN and date of first publication are as follows: [3]

The publishing of Astronomy & Astrophysics was further extended in 1992 by the incorporation of Bulletin of the Astronomical Institutes of Czechoslovakia, established in 1947. Astronomy & Astrophysics initially published articles in either English, French, or German, but articles in French and German were always few. They were eventually discontinued, in part due to difficulties in finding adequately specialized independent referees who were also fluent in those languages.

The original sponsoring countries were the four countries whose journals merged to form Astronomy & Astrophysics (France, Germany, the Netherlands and Sweden), together with Belgium, Denmark, Finland, and Norway. The European Southern Observatory also participated as a "member country". Norway later withdrew, but Austria, Greece, Italy, Spain, and Switzerland all joined. The Czech Republic, Estonia, Hungary, Poland, and Slovakia all joined as new members in the 1990s. In 2001 the words "A European Journal" were removed from the front cover in recognition of the fact that the journal was becoming increasingly global in scope, and in 2002 Argentina was admitted as an "observer". In 2004 the Board of Directors decided that the journal "will henceforth consider applications for sponsoring membership from any country in the world with well-documented active and excellent astronomical research". [4] Argentina became the first non-European country to gain full membership in 2005. Brazil, Chile, and Portugal all gained "observer" status at this time and have since progressed to full membership. Brazil departed in 2016. The current list of member countries is listed here. [5]

All letters to the editor and all articles published in the online sections of the journal are open access upon publication. Articles in the other sections of the journal are made freely available 12 months after publication (delayed open-access model), through the publisher's site and via the Astrophysics Data System. Authors have the option to pay for immediate open access. [10]

The Paris Observatory, a research institution of PSL University, is the foremost astronomical observatory of France, and one of the largest astronomical centres in the world. Its historic building is on the Left Bank of the Seine in central Paris, but most of the staff work on a satellite campus in Meudon, a suburb southwest of Paris.

The Astrophysics Data System (ADS) is an online database of over eight million astronomy and physics papers from both peer reviewed and non-peer reviewed sources. Abstracts are available free online for almost all articles, and full scanned articles are available in Graphics Interchange Format (GIF) and Portable Document Format (PDF) for older articles. It was developed by the National Aeronautics and Space Administration (NASA), and is managed by the Harvard–Smithsonian Center for Astrophysics.

Open Astronomy is a peer-reviewed fully open access scientific journal, and currently published by De Gruyter Open. The journal was established in 1992 by the Institute of Theoretical Physics and Astronomy as Baltic Astronomy, obtaining its current title in 2017 when it converted to open access. The journal is devoted to publishing research, reviews and news spanning all aspects of astronomy and astrophysics. The editor in chief is Prof. Beatriz Barbuy.

DEN 1048−3956 is a brown dwarf about 13.1 light years from Earth in the southern constellation of Antlia, among the closest interstellar objects to Earth. This substellar object is very dim with an apparent magnitude of about 17, and will require a telescope with a camera to be seen. It was discovered in 2000 by Xavier Delfosse and Thierry Forveille, with the assistance of nine other astronomers.

The Geneva Observatory is an astronomical observatory at Sauverny (CH) in the municipality of Versoix, Canton of Geneva, in Switzerland. It shares its buildings with the astronomy department of the École Polytechnique Fédérale de Lausanne. It has been active in discovering exoplanets, in stellar photometry, modelling stellar evolution, and has been involved in the European Space Agency's Hipparcos, INTEGRAL, Gaia, and Planck missions.

The Astronomy and Astrophysics Review is a peer-reviewed scientific journal that is published quarterly by Springer-Verlag GmbH Germany, part of Springer_Nature. The editor-in-chief is Francesca Matteucci. The first issue was published in April 1989.

Astronomy Reports, is a Russian, monthly, peer reviewed, scientific journal. This journal tends to focus its publishing efforts on original research regarding astronomical topics. Other types of reporting are also included such as chronicles, proceedings of international conferences, and book reviews. Founded in 1924, it is described as the most prominent astronomy journal during the age of the Soviet Union. Originally a print version, it is also available online. The Editor-in-Chief is Alexander A. Boyarchuk, Institute of Astronomy of the Russian Academy of Sciences, Moscow, Russia.

The Serbian Astronomical Journal is a biannual peer-reviewed scientific journal covering astronomy. The journal is the successor of the Bulletin Astronomique de Belgrade (1992–1998), which was formed by a merger of the Bulletin de l'Observatoire Astronomique de Belgrade (1936–1991) and the Publications of the Department of Astronomy (1969–1990). It has been published under the present title since 1998. It is published by the Astronomical Observatory Belgrade and the Department of Astronomy. It publishes invited reviews, original scientific papers, preliminary reports, and professional papers over the entire range of astronomy, astrophysics, astrobiology, and related fields.

The Society for the History of Astronomy is an organisation based in the United Kingdom that promotes research into the history of astronomy. It publishes a research journal called The Antiquarian Astronomer and a regular Bulletin. 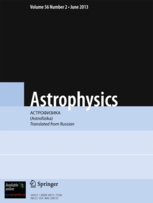 Astrophysics is a peer-reviewed scientific journal of astrophysics published by Springer. Each volume is published every three months. It was founded in 1965 by the Soviet Armenian astrophysicist Viktor Ambartsumian. It is the English version of the journal Astrofizika, published by the Armenian National Academy of Sciences mostly in Russian. The current editor-in-chief is David M. Sedrakyan.

Robert Jonckheere was a French astronomer. He is known for his discovery of more than 3350 double stars. A. R. Jonckheere, psychologist and statistician at University College London, was his son. 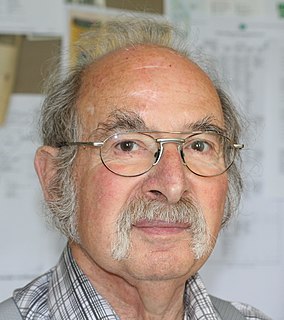 Stuart Pottasch was a professor at the University of Groningen and a researcher of planetary nebulae.

NGC 3981 is a spiral galaxy located 62 million light-years away in the constellation of Crater. It was discovered on February 7, 1785 by William Herschel. 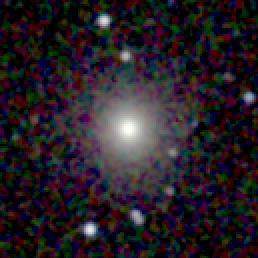 NGC 759 is an elliptical galaxy located 230 million light-years away in the constellation Andromeda. NGC 759 was discovered by astronomer by Heinrich d'Arrest on September 17, 1865. It is a member of Abell 262.