The Battle of Cumae was one of several battles between Cumae and the Etruscans. In 524 BC an army of Umbrians, Daunians, Etruscans, and others were defeated by the Greeks of Cumae. [1]

This naval battle in 474 BC was between the combined navies of Syracuse and Cumae against the Etruscans. [2]

The Greek city of Cumae was founded in 8th century BC in an area towards the southern Etruscan border. By 504 the southern Etruscans were defeated by the Cumaeans, but they still maintained a powerful force. In 474 they were able to raise a fleet to launch a direct attack on Cumae. [3]

After he was called on for military assistance, Hiero I of Syracuse allied with naval forces from the maritime Greek cities of southern Italy to defend against Etruscan expansion into southern Italy. In 474, they met and defeated the Etruscan fleet at Cumae in the Bay of Naples. [4] After their defeat, the Etruscans lost much of their political influence in Italy. They lost control of the sea and their territories were eventually taken over by the Romans, Samnites, and Gauls. The Syracusans dedicated a captured Etruscan helmet at the great panhellenic sanctuary at Olympia, a piece of armour found in the German excavations there. The Etruscans would later join the failed Athenian expedition against Syracuse in 415 BC, which contributed even further to their decline.[ citation needed ] 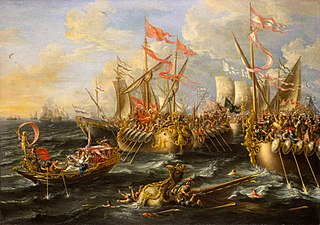 The Battle of Actium was a naval battle in the last war of the Roman Republic, fought between the fleet of Octavian and the combined forces of Mark Antony and Queen Cleopatra of Egypt. It took place on 2 September 31 BC in the Ionian Sea near the promontory of Actium in Greece. 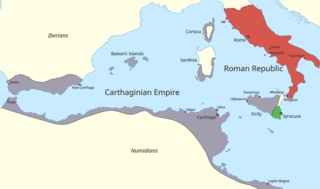 The First Punic War was the first of three wars fought between Carthage and Rome, the two main powers of the western Mediterranean in the early 3rd century BC. For 23 years, in the longest continuous conflict and greatest naval war of antiquity, the two powers struggled for supremacy. The wars were fought primarily on the Mediterranean island of Sicily and its surrounding waters, and also in North Africa. After immense material and human losses on both sides, the Carthaginians were defeated.

The Punic Wars were a series of three wars between 264 and 146 BC fought by the states of Rome and Carthage. The First Punic War broke out in Sicily in 264 BC as a result of Rome's expansionary attitude combined with Carthage's proprietary approach to the island. At the start of the war Carthage was the dominant power of the western Mediterranean, with an extensive maritime empire; while Rome was a rapidly expanding power in Italy, with a strong army but a weak navy. The fighting took place primarily on the Mediterranean island of Sicily and its surrounding waters, and also in North Africa, Corsica and Sardinia. It lasted 23 years, until 241 BC, when after immense materiel and human losses on both sides the Carthaginians were defeated. By the terms of the peace treaty Carthage paid large reparations and Sicily was annexed as a Roman province. The end of the war sparked a major but unsuccessful revolt within the Carthaginian Empire known as the Mercenary War.

The Second Punic War was the second of three wars fought between Carthage and Rome, the two main powers of the western Mediterranean in the 3rd century BC. For seventeen years, the two states struggled for supremacy, primarily in Italy and Iberia, but also on the islands of Sicily and Sardinia and, towards the end of the war, in North Africa. After immense material and human losses on both sides, the Carthaginians were defeated. Macedonia, Syracuse and several Numidian kingdoms were drawn into the fighting; and Iberian and Gallic forces fought on both sides. There were three main military theatres during the war: Italy, where the Carthaginian general Hannibal defeated the Roman legions repeatedly, with occasional subsidiary campaigns in Sicily, Sardinia and Greece; Iberia, where Hasdrubal, a younger brother of Hannibal, defended the Carthaginian colonial cities with mixed success until moving into Italy; and Africa, where the war was decided.

Year 474 BC was a year of the pre-Julian Roman calendar. At the time, it was known as the Year of the Consulship of Medullinus and Vulso. The denomination 474 BC for this year has been used since the early medieval period, when the Anno Domini calendar era became the prevalent method in Europe for naming years.

The year 524 BC was a year of the pre-Julian Roman calendar. In the Roman Empire, it was known as year 230 Ab urbe condita. The denomination 524 BC for this year has been used since the early medieval period, when the Anno Domini calendar era became the prevalent method in Europe for naming years.

Cumae was the first ancient Greek colony on the mainland of Italy, founded by settlers from Euboea in the 8th century BC and soon becoming one of the strongest colonies. It later became a rich Roman city, the remains of which lie near the modern village of Cuma, a frazione of the comune Bacoli and Pozzuoli in the Metropolitan City of Naples, Campania, Italy. 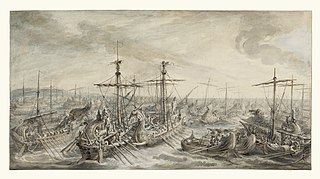 The Battle of Cape Ecnomus or Eknomos was a naval battle, fought off southern Sicily, in 256 BC, between the fleets of Carthage and the Roman Republic, during the First Punic War. The Carthaginian fleet was commanded by Hanno and Hamilcar; the Roman fleet jointly by the consuls for the year, Marcus Atilius Regulus and Lucius Manlius Vulso Longus. It resulted in a clear victory for the Romans.

The Roman navy comprised the naval forces of the ancient Roman state. The navy was instrumental in the Roman conquest of the Mediterranean Basin, but it never enjoyed the prestige of the Roman legions. Throughout their history, the Romans remained a primarily land-based people and relied partially on their more nautically inclined subjects, such as the Greeks and the Egyptians, to build their ships. Because of that, the navy was never completely embraced by the Roman state, and deemed somewhat "un-Roman".

The history of Naples is long and varied, dating to Greek settlements established in the Naples area in the 2nd millennium BC. During the end of the Greek Dark Ages a larger mainland colony – initially known as Parthenope – developed around the 9-8th century BC, and was refounded as Neapolis in the 6th century BC: it held an important role in Magna Graecia. The Greek culture of Naples was important to later Roman society. When the city became part of the Roman Republic in the central province of the Empire, it was a major cultural centre. 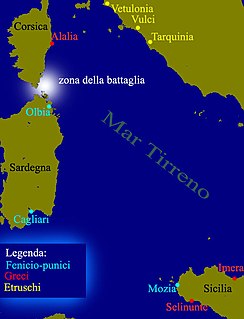 The naval Battle of Alalia took place between 540 BCE and 535 BCE off the coast of Corsica between Greeks and the allied Etruscans and Carthaginians. A Greek force of 60 Phocaean ships defeated a Punic-Etruscan fleet of 120 ships while emigrating to the western Mediterranean and the nearby colony of Alalia. 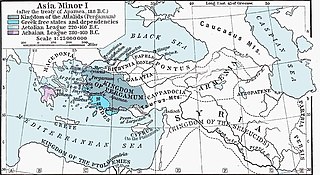 The Seleucid War, also known as the War of Antiochos or the Syrian War, was a military conflict between two coalitions led by the Roman Republic and the Seleucid Empire. The fighting took place in modern day southern Greece, the Aegean Sea and Asia Minor.

The city of Carthage was founded in the 9th century BC on the coast of Northwest Africa, in what is now Tunisia, as one of a number of Phoenician settlements in the western Mediterranean created to facilitate trade from the city of Tyre on the coast of what is now Lebanon. The name of both the city and the wider republic that grew out of it, Carthage developed into a significant trading empire throughout the Mediterranean. The date from which Carthage can be counted as an independent power cannot exactly be determined, and probably nothing distinguished Carthage from the other Phoenician colonies in Northwest Africa and the Mediterranean during 800–700 BC. By the end of the 7th century BC, Carthage was becoming one of the leading commercial centres of the West Mediterranean region. After a long conflict with the emerging Roman Republic, known as the Punic Wars, Rome finally destroyed Carthage in 146 BC. A Roman Carthage was established on the ruins of the first. Roman Carthage was eventually destroyed—its walls torn down, its water supply cut off, and its harbours made unusable—following its conquest by Arab invaders at the close of the 7th century. It was replaced by Tunis as the major regional centre, which has spread to include the ancient site of Carthage in a modern suburb.

Like the Egyptians, Phoenicians and Carthaginians, the Etruscans were rather slow to adopt the invention of coinage. The brief period of Etruscan coinage, with the predominance of marks of value, seems to be an amalgam that reconciles two very different monetary systems: the 'primitive' bronze-weighing and aes grave economy of central Italy with that of struck silver and gold issues of southern Italian Greek type not familiar in Etruria.

Mago I, also known as Magon, was the king of the Ancient Carthage from 550 BC to 530 BC and the founding monarch of the Magonid dynasty of Carthage. Mago I was originally a general. Under Mago, Carthage became preeminent among the Phoenician colonies in the western Mediterranean.