Adria is a town and comune in the province of Rovigo in the Veneto region of northern Italy, situated between the mouths of the rivers Adige and Po. The remains of the Etruscan [3] city of Atria or Hatria are to be found below the modern city, three to four metres below the current level. Adria and Spina were the Etruscan ports and depots for Felsina (now Bologna). Adria may have given its name during an early period to the Adriatic Sea, to which it was connected by channels. [4]

The first settlements built in the area are of Venetic origin, during the twelfth to ninth centuries BC, consisting of stilt houses in the wetlands, that were then still close to the sea. At that time the main stream of the Po, the Adria channel, flowed into the sea in this area. The Villanovan culture, named for an archaeological site at the village of Villanova, near Bologna (Etruscan Felsina), flourished in this area from the tenth until as late as the sixth century BC. The foundations of classical Atria are dated from 530 to 520 BC. [5]

The Etruscans built the port and settlement of Adria after the channel gradually started to run dry. During the later period of the sixth century BC the port continued to flourish. The Etruscan-controlled area of the Po Valley was generally known as Padanian Etruria, [6] as opposed to their main concentration along the Tyrrhenian coast south of the Arno.

Greeks from Aegina [7] and later from Syracuse by Dionysius I colonised the city making it into an emporion. Greeks had been trading with the Veneti from the sixth century BC at least, [8] especially the amber, originally coming from the Baltic sea.

Mass Celtic incursions into the Po valley resulted in friction between the Gauls and Etruscans and intermarriage, attested by epigraphic inscriptions on which Etruscan and Celtic names appear together. The city was populated [9] by Etruscans, Veneti, Greeks and Celts.

Pliny the Elder, a Roman author and fleet commander, wrote about a system of channels in Atria that was, “first made by the Tuscans [i.e. Etruscans], thus discharging the flow of the river across the marshes of the Atriani called the Seven Seas, with the famous harbor of the Tuscan town of Atria which formerly gave the name of Atriatic to the sea now called the Adriatic.” Those “Seven Seas” were interlinked coastal lagoons, separated from the open sea by sand pits and barrier islands. [10] The Etruscans extended this natural inland waterway with new canals to extend the navigation possibilities of the tidal reaches of the Po all the way north to Atria. As late as the time of the emperor Vespasian, shallow draft galleys could still be rowed from Ravenna into the heart of Etruria. Under Roman occupation the town ceded importance to the former Greek colony Ravenna as the continued siltation of the Po delta carried the seafront further to the east. The sea is now about 22 kilometres (14 miles) from Adria.

The first exploration of ancient Atria was carried out by Carlo Bocchi and published as Importanza di Adria la Veneta. The collections of the Bocchi family were given to the public at the beginning of the 20th century and comprise a major part of the city museum collection of antiquities.

There are several ideas concerning the etymology of the ancient toponym Adria/Atria. One theory is that it derives from the Illyrian (Venetic language) word adur “water, sea”. [11]

At the time of the fall of the Western Roman Empire, the port of Adria had lost most of its importance. It finally declined after the total change of the local hydrography in 589, following the catastrophic flood documented by Paul the Deacon, [12] and Adria became a fief of the archdiocese of Ravenna.

After a period as an independent commune, it was a possession of the Este of Ferrara and, in the 16th century, of the Republic of Venice. At that time Adria was a small village surrounded by malaria-plagued marshes. It recovered its importance when Polesine was reclaimed in the same century.

During the Napoleonic Wars it was first under France, then under Austria, to which it was assigned in 1815 after the Congress of Vienna, as part of Lombardy-Venetia.

Adria is twinned with the following towns:

The Etruscan civilization is the modern name given to a civilization of ancient Italy in the area corresponding roughly to Tuscany, western Umbria, northern Lazio, with offshoots also to the north in the Po Valley, in the current Emilia-Romagna, south-eastern Lombardy and southern Veneto, and to the south, in some areas of Campania.

The Iapydes were an ancient people who dwelt north of and inland from the Liburnians, off the Adriatic coast and eastwards of the Istrian peninsula. They occupied the interior of the country between the Colapis (Kupa) and Oeneus (Una) rivers, and the Velebit mountain range which separated them from the coastal Liburnians. Their territory covered the central inlands of modern Croatia and Una River Valley in today's Bosnia and Herzegovina. Archaeological documentation confirms their presence in these countries at least from 9th century BC, and they persisted in their area longer than a millennium. The ancient written documentation on inland Iapydes is scarcer than on the adjacent coastal peoples that had more frequent maritime contacts with ancient Greeks and Romans.

Venetic is an extinct Indo-European language, usually classified into the Italic subgroup, that was spoken by the Veneti people in ancient times in the North East of Italy and part of modern Slovenia, between the Po River delta and the southern fringe of the Alps.

Spina was an Etruscan port city, established by the end of the 6th century BCE, on the Adriatic at the ancient mouth of the Po, south of the lagoon which would become the site of Venice. 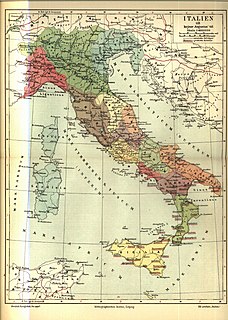 Roman Umbria is a modern name for one of the 11 administrative regions into which the emperor Augustus divided Italy. The main source for the regions is the Historia Naturalis of Pliny the Elder, who informs his readers he is basing the geography of Italy on the discriptio Italiae, "division of Italy," made by Augustus. The Sexta Regio is called Umbria complexa agrumque Gallicam citra Ariminium, "Umbria including the Gallic country this side of Rimini." 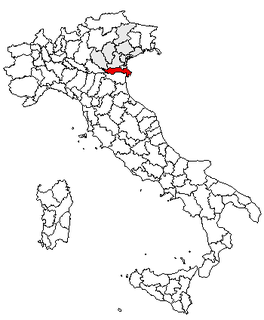 Polesine is a geographic and historic area in the north-east of Italy whose limits varied through centuries; it had also been known as Polesine of Rovigo for some time.

Atri is a comune in the Province of Teramo in the Abruzzo region of Italy. Atri is the setting of the poem The Bell of Atri by American writer Henry Wadsworth Longfellow. Its name is the origin of the name of the Emperor Hadrian.

The Carni were a tribe of the Eastern Alps in classical antiquity, settling in the mountains separating Noricum and Venetia.

The Este culture or Atestine culture was an Iron Age culture existing from the late Italian Bronze Age to the Roman period. It was located in the present territory of Veneto in Italy and derived from the earlier and more extensive Proto-Villanovan culture. It is also called "civilization of situlas", or paleo-venetic.

The Raeti were a confederation of Alpine tribes, whose language and culture may have been related to those of Etruscans. From not later than ca. 500 BC, they inhabited the central parts of present-day Switzerland, Tyrol in Austria, the Alpine regions of northeastern Italy and Germany south of the Danube. 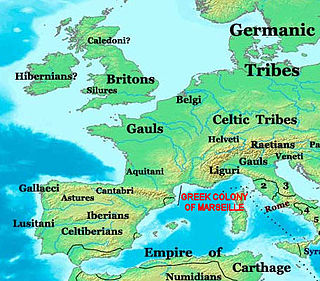