The first major systematic study of Etruscan mirror was Eduard Gerhard's Etruskische Spiegel. The work consists of five volumes published between 1843 and 1897 (the final volume being published after Gerhard's death). In 1973 a decision was made to make a new publication that could replace Gerhard's outdated work. [1]

The Villa Giulia is a villa in Rome, Italy. It was built by Pope Julius III in 1551-1553 on what was then the edge of the city. Today it is publicly owned, and houses the Museo Nazionale Etrusco, a collection of Etruscan art and artifacts. 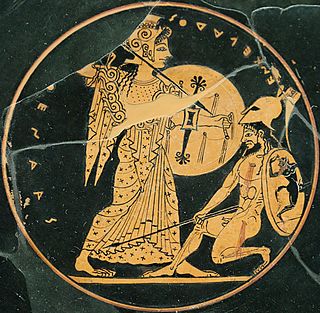 Oltos was a Late Archaic Greek vase painter, active in Athens. From the time between 525 BC and 500 BC, about 150 works by him are known. Two pieces, a cup in Berlin and a cup in Tarquinia, are signed by him as painter.

The Corpus Inscriptionum Etruscarum is a corpus of Etruscan texts, collected by Karl Pauli and his followers since 1885. After the death of Olof August Danielsson in 1933, this collection was passed on to the Uppsala University Library.

Gian Francesco Gamurrini, was an Italian archeologist and historian, bibliophile and connoisseur.

Giulio Quirino Giglioli was an art historian of classical Roman and Etruscan art and was associated with Fascism in Italy.

Lammert Bouke van der Meer is a Dutch classicist and classical archaeologist specialized in etruscology. He studied classics and archaeology at the University of Groningen, and received his Ph.D. from the same university in 1978 with a dissertation entitled Etruscan urns from volterra. Studies on mythological representations, I-II. Van der Meer is retired associate professor of Classical Archaeology at Leiden University.

Nancy Thomson de Grummond is the M. Lynette Thompson Professor of Classics and Distinguished Research Professor at Florida State University. She specializes in Etruscan, Hellenistic and Roman archaeology. She serves as the director of archaeological excavations at Cetamura del Chianti in Tuscany, Italy. Her current research relates to Etruscan and Roman religion, myth and iconography.

Hermonax was a Greek vase painter working in the red-figure style. He painted between c. 470 and 440 BC in Athens. Ten vases signed with the phrase "Hermonax has painted it" survive, mainly stamnoi and lekythoi. He is generally a painter of large pots, though some cups survive.

Wedding Painter is the conventional name for an ancient Greek vase painter active in Athens from circa 480 to 460 BC. He painted in the red-figure technique. His name vase is a pyxis in the Louvre depicting the wedding of Thetis and Peleus.

Giampietro Campana, created marchese di Cavelli (1849), was an Italian art collector who assembled one of the nineteenth century's greatest collection of Greek and Roman sculpture and antiquities. The part of his collection of Hellenistic and Roman gold jewellery conserved in the Musée du Louvre warranted an exhibition devoted to it in 2005-06. He was an early collector of early Italian paintings, the so-called "primitives" of the fourteenth and fifteenth centuries, which were overlooked by his contemporaries. And like many collectors of his generation, he coveted Italian maiolica of the 15th and 16th centuries. 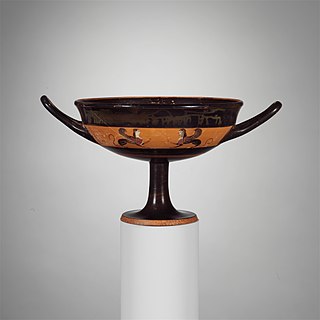 Tleson was an Attic potter and perhaps also a vase painter in the black-figure style. He was the son of the famous potter Nearchos and brother of Ergoteles. His workshop apparently produced mostly Little-master cups. Most of his vases were painted by the Tleson Painter, whose real name is unknown, and whose conventional name is derived from Tleson. Based on the fact that vases known by that hand so far are only ever signed by Tleson, John Beazley suggested that Tleson and the Tleson painter may be identical. There is no proof for this hypothesis. Some of Tleson's pots were painted by other artists, such as Oltos and the Centaur Painter.

The Taleides Painter was an Attic vase painter of the black-figure style, active in the second half of the 6th century BC. His conventional name is derived from his close cooperation with the potter Taleides, many of whose vases he painted. He also worked for the potter Timagoras.

The Lysippides Painter was an Attic vase painter in the black-figure style. He was active around 530 to 510 BC. His real name is not known.