Last updated May 07, 2021
This article is about the museum. For the building housing the museum, see Villa Giulia.
National museum in Rome, Italy

The National Etruscan Museum (Italian : Museo Nazionale Etrusco) is a museum of the Etruscan civilization, housed in the Villa Giulia in Rome, Italy.

The villa was built for Pope Julius III, for whom it was named. It remained in papal property until 1870, when, in the wake of the Risorgimento and the demise of the Papal States, it became the property of the Kingdom of Italy. The museum was founded in 1889 as part of the same nationalistic movement, with the aim of collecting together all the pre-Roman antiquities of Latium, southern Etruria and Umbria belonging to the Etruscan and Faliscan civilizations, and has been housed in the villa since the beginning of the 20th century.

The museum's most famous single treasure is the terracotta funerary monument, the almost life-size Bride and Groom (the so-called Sarcofago degli Sposi , or Sarcophagus of the Spouses), reclining as if they were at a dinner party.

Other objects held are:

Villa Borghese is a landscape garden in Rome, containing a number of buildings, museums and attractions. It is the third largest public park in Rome after the ones of the Villa Doria Pamphili and Villa Ada. The gardens were developed for the Villa Borghese Pinciana, built by the architect Flaminio Ponzio, developing sketches by Scipione Borghese, who used it as a villa suburbana, or party villa, at the edge of Rome, and to house his art collection. The gardens as they are now were remade in the late 18th century. 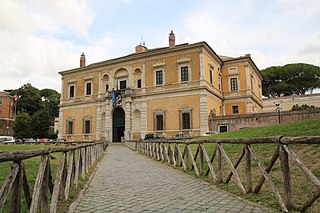 The Villa Giulia is a villa in Rome, Italy. It was built by Pope Julius III in 1551–1553 on what was then the edge of the city. Today it is publicly owned, and houses the Museo Nazionale Etrusco, a collection of Etruscan art and artifacts. 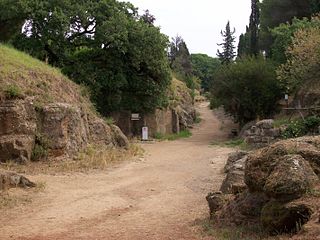 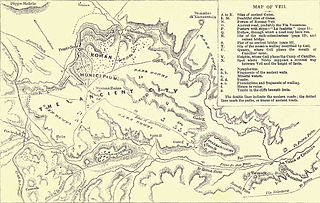 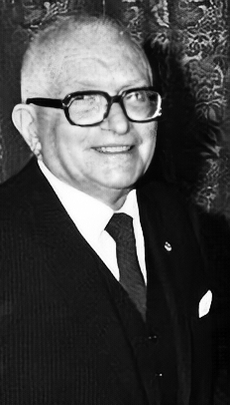 Giulio Quirino Giglioli was an art historian of classical Roman and Etruscan art and was associated with Fascism in Italy.

Hermonax was a Greek vase painter working in the red-figure style. He painted between c. 470 and 440 BC in Athens. Ten vases signed with the phrase "Hermonax has painted it" survive, mainly stamnoi and lekythoi. He is generally a painter of large pots, though some cups survive.

Wedding Painter is the conventional name for an ancient Greek vase painter active in Athens from circa 480 to 460 BC. He painted in the red-figure technique. His name vase is a pyxis in the Louvre depicting the wedding of Thetis and Peleus.

Giampietro Campana, created marchese di Cavelli (1849), was an Italian art collector who assembled one of the nineteenth century's greatest collection of Greek and Roman sculpture and antiquities. The part of his collection of Hellenistic and Roman gold jewellery conserved in the Musée du Louvre warranted an exhibition devoted to it in 2005-06. He was an early collector of early Italian paintings, the so-called "primitives" of the fourteenth and fifteenth centuries, which were overlooked by his contemporaries. And like many collectors of his generation, he coveted Italian maiolica of the 15th and 16th centuries.

Walter Maioli is an Italian researcher, paleorganologist, poly-instrumentalist and composer. Specialized in experimental archaeology and music, in particular that of archaic civilization. He has been researching the music of antiquity and prehistory for more than thirty-five years. Always interested in the music of the Mediterranean, he has gone on journeys to discover the folkloristic Italian and Mediterranean traditions learning the Arabic, African, Oriental, and European music since the beginning of the seventies.

The Phrynos Painter was an Attic black-figure vase painter, active in Athens between c. 560 and 545 BC. He was allocated the conventional name Phrynos Painter after the potter Phrynos, as he had painted three cups signed by the latter:

The Taleides Painter was an Attic vase painter of the black-figure style, active in the second half of the 6th century BC. His conventional name is derived from his close cooperation with the potter Taleides, many of whose vases he painted. He also worked for the potter Timagoras. 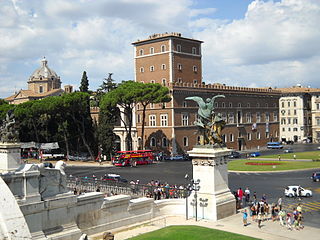 The Polo Museale del Lazio is an office of Italy's Ministry of Cultural Heritage. Its seat is in Rome in the Palazzo Venezia. 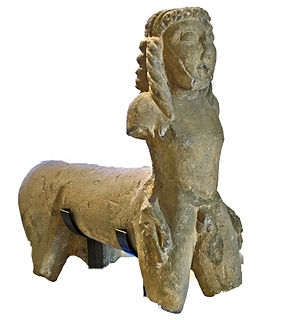 The Centaur of Vulci is a statue of the Etruscan Orientalising period, discovered in Vulci near Etruscan Viterbo, now in the collection of the National Etruscan Museum of Villa Giulia in Rome.

The Castellani were a family of goldsmiths, collectors, antique dealers and potters, who created a business "empire" active in Rome during the eighteenth centuries and nineteenth centuries.