The Palazzo Mattei di Giove is the most prominent among a group of Mattei houses that forms the insula Mattei in Rome, Italy, a block of buildings of many epochs [1]

To distinguish this section from the others it carries the name of a Mattei fief, Giove. The Mattei owned a number of other palazzi that carried the family name including Palazzo Mattei di Trastevere across the Tiber as well as properties in Umbria, the Palazzo Mattei Paganica. [2]

Carlo Maderno designed the palace [3] at the beginning of the 17th century for Asdrubale Mattei, Marquis di Giove and father of Girolamo Mattei and Luigi Mattei. He was also the brother of Ciriaco Mattei and Cardinal Girolamo Mattei. It was Maderno who was responsible for the extravagantly enriched cornice on the otherwise rather plain stuccoed public façade, the piano nobile loggia in the courtyard and the rooftop loggia or altana. [4]

Asdrubale Mattei, Duca di Giove, was an Italian nobleman of the House of Mattei, an avid art collector and a patron of Caravaggio.

Girolamo Mattei was an Italian nobleman of the House of Mattei and Duke of Giove.

For the interior of the palazzo, Pietro da Cortona was commissioned to execute the pair of compositions on the ceiling of the gallery, dating before 1626. In the early 19th century, a group of paintings from the collection at the palazzo was purchased by William Hamilton Nisbet and removed to Scotland. 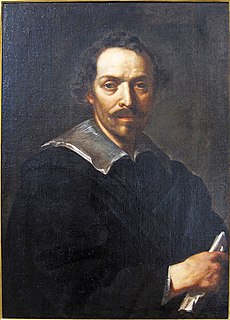 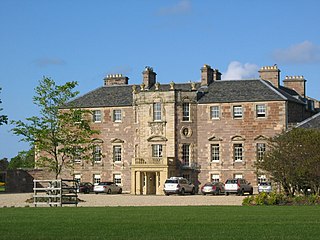 Like others of the Mattei family, Asdrubale Mattei was an enthusiastic patron of the arts. Michelangelo Merisi da Caravaggio (better known simply as Caravaggio) is recorded as living at the palazzo in 1601. 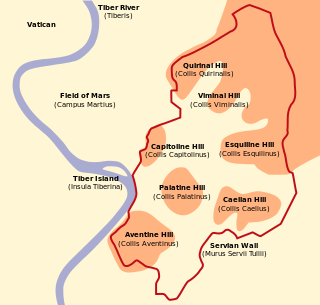 The Taking of Christ is a painting, of the arrest of Jesus, by the Italian Baroque master Michelangelo Merisi da Caravaggio. Originally commissioned by the Roman nobleman Ciriaco Mattei in 1602, it is housed in the National Gallery of Ireland, Dublin.

Sant'Angelo is the eleventh historic district or rione of Rome, Italy, located in Municipio I. Often written as rione XI - Sant'Angelo, it has a coat of arms with an angel on a red background, holding a palm branch in its left hand. In another version, the angel holds a sword in its right hand and a scale in its left. 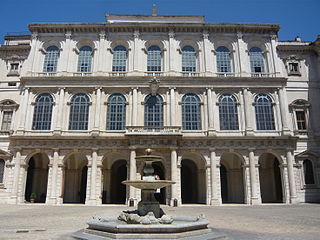 The Palazzo Barberini is a 17th-century palace in Rome, facing the Piazza Barberini in Rione Trevi. Today it houses the Galleria Nazionale d'Arte Antica, the main national collection of older paintings in Rome.

Giove is a comune in the province of Terni.

The Palazzo Pallavicini-Rospigliosi is a palace in Rome, Italy. It was built by the Borghese family on the Quirinal Hill; its footprint occupies the site where the ruins of the baths of Constantine stood, whose remains still are part of the basement of the main building, the Casino dell'Aurora. Its first inhabitant was the famed art collector Cardinal Scipione Borghese, the nephew of Pope Paul V, who wanted to be housed near the large papal Palazzo Quirinale. The palace and garden of the Pallavicini-Rospigliosi were the product of the accumulated sites and were designed by Giovanni Vasanzio and Carlo Maderno in 1611–16. Scipione owned this site for less than a decade, 1610–16, and commissioned the construction and decoration of the casino and pergolata, facing the garden of Montecavallo. The Roman palace of this name should not be mistaken for the panoramic Villa Pallavicino on the shores of Lake Como in Lombardy.

The House of Mattei was one of the most powerful noble families of Rome during the Middle Ages and early modern era, holding high positions in the papal curia and government office. The family amassed significant art collections under art enthusiasts such as Ciriaco Mattei. 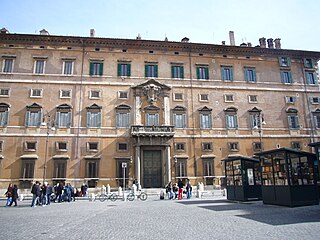 Palazzo Borghese is a palace in Rome, Italy, the main seat of the Borghese family. It was nicknamed il Cembalo due to its unusual trapezoidal groundplan; its narrowest facade faces the River Tiber. The entrance at the opposite end of the building, the "keyboard" of the cembalo, faces onto the Fontanella di Borghese, with another in a great flanking facade to the Piazza Borghese that is extended by a slightly angled facade leading down Via Borghese towards the river. Both these entrances lead into a large courtyard on one side of which is a two level open arcade, with paired Doric and Ionic columns, that frames the garden beyond.

Ciriaco Mattei was an Italian nobleman of Rome and of the House of Mattei and one of the most prolific art collectors of his time.

Palazzo Abatellis is a palace in Palermo, Sicily, southern Italy, located in the Kalsa quarter. It is home to the Galleria Regionale della Sicilia, the Gallery of Art for the Sicilian region.

Luigi Mattei was an Italian military General and Marquis de Belmonte. During the 17th century he commanded troops loyal to the papal armies of Barberini Pope Urban VIII and Pamphili Pope Innocent X during the Wars of Castro. 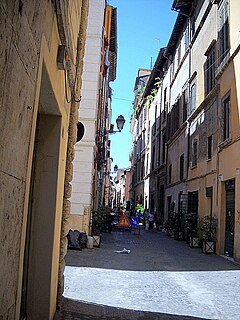 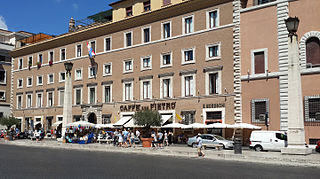 The Palazzo Rusticucci-Accoramboni is a reconstructed late Renaissance palace in Rome. Erected by the will of Cardinal Girolamo Rusticucci, it was designed by Domenico Fontana and Carlo Maderno joining together several buildings already existing. Due to that, the building was not considered a good example of architecture. Originally lying along the north side of the Borgo Nuovo street, after 1667 the building faced the north side of the large new square located west of the new Saint Peter's Square, designed in those years by Gian Lorenzo Bernini. The square, named Piazza Rusticucci after the palace, was demolished in 1937–40 because of the erection of the new Via della Conciliazione. In 1940 the palace was dismantled and rebuilt with a different footprint along the north side of the new avenue, constructed between 1936 and 1950, which links St Peter's Basilica and the Vatican City to the center of Rome.