The arch is located on the Caelian Hill, at the north corner of the site of the Castra Peregrina. [2] It spans the modern Via di S. Paolo della Croce, along the line of the ancient Clivus Scauri . Its location indicates that it was a rebuilding of one of the gates of the Servian Walls, though which one is unclear: possibly the Porta Querquetulana (or Querquetularia) or the Porta Caelimontana. Although the latter is considered the more likely original, there is no indication that any important road went out of the city through the Caelimontana. [3]

The extension of the Aqua Claudia undertaken during the reign of Nero made use of the Arch of Dolabella for the last section. [4] Its original purpose was probably to support a branch of the Aqua Marcia. [5]

The travertine arch was not decorated with sculptural relief. [6] 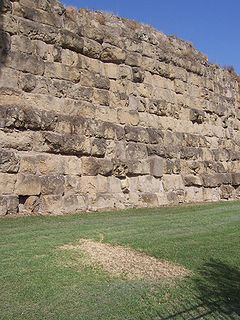 The Servian Wall was an ancient Roman defensive barrier constructed around the city of Rome in the early 4th century BCE. The wall was built of volcanic tuff and was up to 10 m (33 ft) in height in places, 3.6 m (12 ft) wide at its base, 11 km (6.8 mi) long, and is believed to have had 16 main gates, though none survive, and it enclosed a total area of 608 acres. In the 3rd century CE it was superseded by the construction of the larger Aurelian Walls as the city of Rome grew beyond the boundary of the Servian Wall. 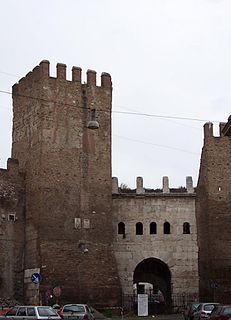 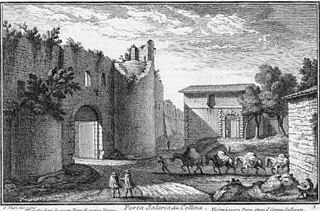 The Porta Latina is a single-arched gate in the Aurelian Walls of ancient Rome. It marked the Rome end of the Via Latina and gives its name to the church of San Giovanni a Porta Latina. Most of the present structure dates to Honorius, including the arch's voussoirs. The gate retained its name throughout the Middle Ages. Also nearby are the oratory of San Giovanni in Oleo and the pagan Columbarium of Pomponius Hylas.

The Stadium of Domitian, also known as the Circus Agonalis, was located to the north of the Campus Martius in Rome, Italy. The Stadium was commissioned around AD 80 by the Emperor Titus Flavius Domitianus as a gift to the people of Rome, and was used mostly for athletic contests.

In ancient Rome, the Piscina Publica was a public reservoir and swimming pool located in Regio XII. The region itself came to be called informally Piscina Publica from the landmark. The piscina was situated in the low-lying area between the Via Appia, the Servian Wall, and the northeast slope of the Aventine Hill, an area later occupied by the Baths of Caracalla. 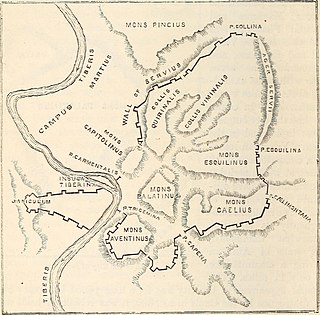 The Porta Caelimontana or Celimontana was a gate in the Servian Wall on the rise of the Caelian Hill. The Via Caelimontana ran from it; in the late 19th and early 20th centuries, Roman tombs were discovered along its southern edge, some of which have disappeared.

The Porta Fontinalis was a gate in the Servian Wall in ancient Rome. It was located on the northern slope of the Capitoline Hill, probably the northeast shoulder over the Clivus Argentarius. The Via Salaria exited through it, as did the Via Flaminia originally, providing a direct link with Picene and Gallic territory. After the Aurelian Walls were constructed toward the end of the 3rd century AD, the section of the Via Flaminia that ran between the Porta Fontinalis and the new Porta Flaminia was called the Via Lata ("Broadway").

The Lautumiae were tufa quarries that became a topographical marker in ancient Rome. They were located on the northeast slope of the Capitoline Hill, forming one side of the Graecostasis, where foreign embassies gathered prior to appearing before the Roman senate.

The Porta Querquetulana or Querquetularia was a gateway in the Servian Wall, named after the sacred grove of the Querquetulanae adjacent to and just within it. The grove appears not to have still existed in the latter 1st century BC.

The Porta Carmentalis was a double gate in the Servian Walls of ancient Rome. It was named for a nearby shrine to the goddess or nymph Carmenta, whose importance in early Roman religion is also indicated by the assignment of one of the fifteen flamines to her cult, and by the archaic festival in her honor, the Carmentalia. The shrine was to the right as one exited the gate.

The Clivus Scauri was an ancient Roman road that originally branched off from the road that connected the Circus Maximus to the Colosseum along the depression between the Palatine and Caelian hills of Rome. It followed the east side of the latter, up to its summit, which is today known as Piazza della Navicella. In the initial section the road has retained the old name. It becomes Via di S. Paolo della Croce further up the hill.

The Amphitheater of Caligula was an Roman amphitheater, built during the reign of the emperor Caligula and demolished only a few years after its construction. It was sited on the Campus Martius in Rome, probably near the Saepta Julia, since the inscription mentioning it was just to the north of the Saepta.

The Arch of Gratian, Valentinian and Theodosius was a triumphal arch built between 379 and 383 AD in Rome. It was situated at the south end of the Pons Aelius, near to the site later occupied by the church of San Celso. It formed as a monumental entrance arch to the bridge.

The Arch of Lentulus and Crispinus was a triumphal arch in Rome, sited between the Porta Trigemina of the Servian Wall and the statio Annonae, to the south of the Forum Boarium, near the carceres of the Circus Maximus.

The Arch of Pietas was an ancient Roman triumphal arch to the north of the Pantheon on the Campus Martius in Rome.