Carbonated milk is milk that has been carbonated and sold for human consumption.

Although carbonated milk is not sold globally, it is a popular drink in East Asia.

Vio is a mix of flavored milk and carbonated water made by The Coca-Cola Company. [1]

Fanta is a brand of fruit-flavored carbonated drinks created by Coca-Cola Deutschland under the leadership of German businessman Max Keith. There are more than 100 flavors worldwide. Fanta originated as a Coca-Cola substitute during the American trade embargo of Nazi Germany which affected the availability of Coca-Cola ingredients in 1940; the current version was created in Italy. The name Fanta is a shortening of the word Fantasie. 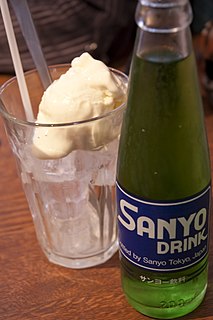 Crush is a brand of carbonated soft drinks owned and marketed internationally by Keurig Dr Pepper, originally created as an orange soda, Orange Crush. Crush mainly competes with Coca-Cola's Fanta, and Sunkist. It was created in 1911 by beverage and extract chemist Neil C. Ward. Most flavors of Crush are caffeine-free. 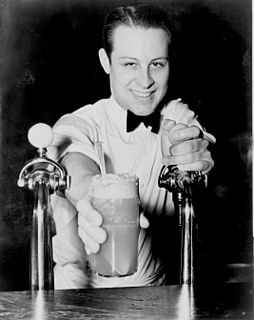 A soda jerk is a person—typically a youth—who operates the soda fountain in a drugstore, often for the purpose of preparing and serving soda drinks and ice cream sodas. This was made by putting flavored syrup into a specially designed tall glass and adding carbonated water. One or two scoops of ice cream, or occasionally malt powder, could be added. The result was served with a long-handled spoon, most commonly known as a "soda spoon", and drinking straws.

Frescolita is a Venezuelan cola. It is very similar to red cream sodas found in the United States, with a taste similar to gum. Frescolita is also used to bake cakes in some places in Western Venezuela. It is marketed by Coca-Cola. Its ingredients include carbonated water, sugar, sodium benzoate, citric acid, artificial flavor, artificial color. Besides Venezuela, it is available in stores that specialize in Latin American groceries in the United States and Spain.

An ice cream float or ice cream soda, root beer float, or spider, is a chilled beverage that consists of ice cream in either a soft drink or in a mixture of flavored syrup and carbonated water.

Fioravanti is a fruit-flavored, carbonated soft drink first sold in 1878 in Ecuador. It is notable for being one of the first soft drinks commercially sold. In 1991, it was acquired by The Coca-Cola Company.

Kinley is a brand of still or carbonated water owned by The Coca-Cola Company and sold in many large European and Asian countries. Its carbonated forms are used for mixers, and also available in a variety of fruit flavors.

Chūhai, often sold as Chu-Hi as a canned drink, is an alcoholic drink originating from Japan. The name chūhai is an abbreviation of "shōchū highball" (焼酎ハイボール). Traditional chūhai is made with shōchū and carbonated water flavored with lemon, though some modern commercial variants use vodka in place of shōchū. The flavors available have recently multiplied, including lime, grapefruit, apple, orange, pineapple, grape, kyoho grape, kiwi, ume, yuzu, lychee, peach, strawberry cream, and cream soda.

Embotelladora Don Jorge S.A.C. is a corporation involved in the manufacturing, distribution and marketing of nonalcoholic and alcoholic beverages based in Lima, Peru. Its headquarters are located in the San Miguel District, Lima.

Fruktime - a series of the carbonated soft drinks which are on sale in Russia and Ukraine, distribututed by The Coca-Cola Company. It is made in various flavouring variants: Buratino (caramel), Tarhun (tarragon), Hand bell, Lemonade, Pear, Strawberry, Apple, Cream soda, Kvass, and Baikal (Natural).

Portello is a carbonated grape and berry flavored soft drink. Its rich, fruity flavour can be compared to port wine(which inspired the drink's name) or cola. It is believed to have originated in London, England in the 18th century, before spreading to colonies of the British Empire.

Quwat Jabal is a citrus-flavored carbonated soft drink sold in the Middle East. It is produced by Coca-Cola.

Ambasa (アンバサ) is a milk-based soft drink sold by The Coca-Cola Company in Japan. It was introduced in 1982. The company also brought the brand into South Korea in 1984. Variants of this drink, like non-carbonated or fruits flavoured versions, are sold in Japan.

Vio is a beverage produced by The Coca-Cola Company consisting of milk with flavored carbonated water. The flavors are Citrus Burst, Peach Mango, Very Berry, and Tropical Colada.