The firm published Scribner's Magazine for many years. More recently, several Scribner titles and authors have garnered Pulitzer Prizes, National Book Awards and other merits. In 1978 the company merged with Atheneum and became The Scribner Book Companies. In turn it merged into Macmillan in 1984. [1]

Simon & Schuster bought Macmillan in 1994. [2] By this point only the trade book and reference book operations still bore the original family name. After the merger, the Macmillan and Atheneum adult lists were merged into Scribner's and the Scribner's children list was merged into Atheneum. [3] [4] The former imprint, now simply "Scribner", was retained by Simon & Schuster, while the reference division has been owned by Gale since 1999. As of 2012 [update] , Scribner is a division of Simon & Schuster under the title Scribner Publishing Group which also includes the Touchstone Books imprint. [5]

The president of Scribner as of 2017 [update] is Susan Moldow (who also held the position of publisher from 1994 to 2012), and the current publisher is Nan Graham. [6]

The firm was founded in 1846 by Charles Scribner I and Isaac D. Baker as "Baker & Scribner." After Baker's death, Scribner bought the remainder of the company and renamed it the "Charles Scribner Company." In 1865, the company made its first venture into magazine publishing with Hours at Home.

In 1870, the Scribners[ clarification needed ] organized a new firm, Scribner and Company, to publish a magazine entitled Scribner's Monthly . After the death of Charles Scribner I in 1871, his son John Blair Scribner took over as president of the company. His other sons Charles Scribner II and Arthur Hawley Scribner would also join the firm, in 1875 and 1884. They each later served as presidents. When the other partners in the venture sold their stake to the family, the company was renamed Charles Scribner's Sons.

The company launched St. Nicholas Magazine in 1873 with Mary Mapes Dodge as editor and Frank R. Stockton as assistant editor; it became well known as a children's magazine. When the Scribner family sold the magazine company to outside investors in 1881, Scribner's Monthly was renamed the Century Magazine. The Scribners brothers were enjoined from publishing any magazine for a period of five years.

In 1886, at the expiration of this term, they launched Scribner's Magazine. The firm's headquarters were in the Scribner Building, built in 1893, on lower Fifth Avenue at 21st Street, and later in the Charles Scribner's Sons Building, on Fifth Avenue in midtown. Both buildings were designed by Ernest Flagg in a Beaux Arts style.

The children's book division was established in 1934 under the leadership of Alice Dalgliesh. It published works by distinguished authors and illustrators including N.C. Wyeth, Robert A. Heinlein, Marcia Brown, Will James, Marjorie Kinnan Rawlings, and Leo Politi.

Scribner merged with Atheneum in 1978, and then merged into Macmillan in 1984. In 1994, Macmillan was bought by Simon & Schuster.

Notable authors under Simon and Schuster

The Scribner Bookstores are now owned by Barnes & Noble.

The Dangerous Summer is a nonfiction book by Ernest Hemingway published posthumously in 1985 and written in 1959 and 1960. The book describes the rivalry between bullfighters Luis Miguel Dominguín and his brother-in-law, Antonio Ordóñez, during the "dangerous summer" of 1959. It has been cited as Hemingway's last book.

Marjorie Kinnan Rawlings was an American author who lived in rural Florida and wrote novels with rural themes and settings. Her best known work, The Yearling, about a boy who adopts an orphaned fawn, won a Pulitzer Prize for fiction in 1939 and was later made into a movie of the same name. The book was written long before the concept of young adult fiction, but is now commonly included in teen-reading lists. 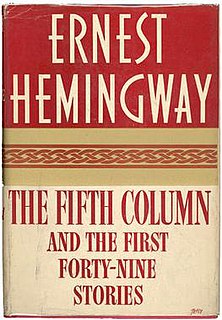 The Fifth Column and the First Forty-Nine Stories is an anthology of writings by Ernest Hemingway published by Scribner's on October 14, 1938. It contains Hemingway's only full-length play, The Fifth Column, and 49 short stories.

Gale is an American educational publishing company based in Farmington Hills, Michigan, west of Detroit. It has been a division of Cengage since 2007.

Free Press was an independent book publisher that later became an imprint of Simon & Schuster. It was one of the best-known publishers specializing in serious nonfiction, including path-breaking sociology books of the 1950s, 1960s and 1970s. After a period under new ownership in the 1980s of publishing neoconservative books, it was purchased by Simon & Schuster in 1994. By 2012, the imprint ceased to exist as a distinct entity; however, some books were still being published using the Free Press imprint.

Alice Dalgliesh was a naturalized American author and publisher who wrote more than 40 fiction and non-fiction books, mainly for children. She has been called "a pioneer in the field of children's historical fiction". Three of her books were runners-up for the annual Newbery Medal, the partly autobiographical The Silver Pencil, The Bears on Hemlock Mountain, and The Courage of Sarah Noble, which was also named to the Lewis Carroll Shelf Award list. 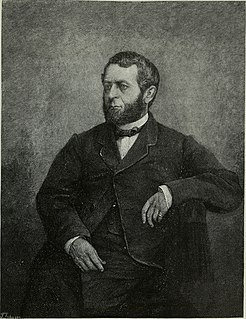 Charles Scribner I was an American publisher who, with Isaac D. Baker (1819–1850), founded a publishing company that would eventually become Charles Scribner's Sons.

The Secret River is a children's fantasy book by Marjorie Kinnan Rawlings, author of The Yearling. Published in 1955, The Secret River received a Newbery Honor Award. The first edition, illustrated by Caldecott Medal winner Leonard Weisgard, was issued after Rawlings' death. The book was revised and reissued in 2009 with illustrations by Caldecott Medalists Leo and Diane Dillon. The new edition received an international children's book design award in 2012. The Secret River is the only book Rawlings wrote specifically for children. The story of young Calpurnia, who goes on a quest to find a magical river and catch fish for her starving family and friends, it has two themes common in Rawlings' writing, the magic of childhood and the struggle of people to survive in a harsh environment.