Congenital myopathy is a very broad term for any muscle disorder present at birth. This defect primarily affects skeletal muscle fibres and causes muscular weakness and/or hypotonia. Congenital myopathies account for one of the top neuromuscular disorders in the world today, comprising approximately 6 in 100,000 live births every year. [1] As a whole, congenital myopathies can be broadly classified as follows:

Congenital myopathies with inclusion bodies and protein accumulation is a broad category, and some congenital myopathies that fall within this group are well understood, such as nemaline myopathy (see below). Typically, the development error in this category occurs when muscle proteins aggregate and build up in the sarcoplasm, which leads to muscle dysfunction.[ citation needed ]

Myopathies with central nuclei, such as myotubular myopathy, involves an error in the gene involved in vesicle movement throughout the cell. This creates problems in vesicles reaching the plasma membrane with the cellular components necessary to fuse myoblast, a major step in the formation of the skeletal muscle. This creates structural problems throughout the skeletal muscle and in the Z line of the sarcomere, creating the weakness in the muscle. [2]

Myopathies with varying fiber size, such as congenital fiber type disproportion, occurs when type 1 fibers, the slow twitch fibers involved in sustaining activity, are smaller than type 2 fibers, the fast twitch fibers involved in quick activity. Since smaller type 1 fibers is not associated with nemaline myopathy, the most common type of congenital myopathy, it has not been studied in as great detail as many of the others. However, the smaller type 1 fibers explains why patients typically can participate in activities for shorter periods of time, but struggle with extended activity. [2]

There are rarely any specific tests for the congenital myopathies except for muscle biopsy. Tests can be run to check creatine kinase in the blood, which is often normal or mildly elevated in congenital myopathies. Electromyography can be run to check the electrical activity of the muscle. Diagnosis heavily relies on muscle pathology, where a muscle biopsy is visualised on the cellular level. Diagnosis usually relies on this method, as creatine kinase levels and electromyography can be unreliable and non-specific. [3] Since congenital myopathies are genetic, there have been advancements in prenatal screenings. [2]

Nemaline myopathy was first described in 1963 [5] and is the most common congenital myopathy. It is characterized by generalized muscle weakness and low muscle tone. In its severest form, affected babies often die from respiratory failure. [6] To date, 9 gene mutations have been found to cause nemaline myopathy. 6 of the identified genes are associated with the actin filament, which is the basis for muscle contraction. Histologically, nemaline rods stain red with Gomori's trichrome and are mostly seen in the subsarcolemmal region of muscle fibres. [7] Nemaline rods have also been observed in the intermyofibrillar region of muscle fibres and within the nucleus. [8] Nemaline myopathy is an autosomal dominant and sometimes an autosomal recessive genetic disorder. Sporadic cases have also been described.[ citation needed ]

Myotubular myopathy, also known as centeronuclear myopathy, is recognized by pain during exercise and difficulty walking. People affected by this disease typically are wheelchair-reliant by middle adulthood, have weakness in the muscles involved in eye movement, nerve function disorders, and some form of intellectual disability. Myotubular myopathy is very rare, with less than 50 families currently affected. Genetically, myotubular myopathy can have two causes: autosomal dominant and autosomal recessive. When caused by a mutation in the DNM2 gene, the disorder is autosomal dominant, meaning it can be passed on by one mutated gene. When the mutation takes place in the BIN1 gene, the disease is instead autosomal recessive, and both genes must be mutated for the disease to be inherited. Autosomal recessive onset is most common. [9]

Congenital fiber type disproportion affects skeletal muscle, typically causing weakness in the shoulders, upper arms, thighs, and hips. Skeletal muscle is made up of two kinds of fiber, type 1 and type 2. In congenital fiber type disproportion, type 1 fibers are not only smaller but often more abundant than type 2 fibers. [12] This leads to affected individuals being able to maintain an active lifestyle, though they usually have lower levels of stamina. [13] Severity with this disease varies greatly, but people typically present symptoms by the age of one. Individuals do not usually worsen with time, and cases have even been reported of improvements. [13]

Multicore myopathy also referred to as minicore myopathy, is associated with small areas of decreased oxidative activities, resulting in areas that appear in this histology as "cores". These appear through microscopy very similar to central core, however the cores are typically smaller in multicore myopathy. As with congenital fiber type disproportion, patients have a greater number of type 1 fibers. Overall, approximately half of diagnosed individuals report no progression of muscle weakness, while half report a very slow progression. [14]

Phenotypes are quite variable, and manifestations can include weakness, abnormal gait, myotonia, cramps, and scoliosis. [19] [20] [21]

Currently, there are no treatments for any of the congenital myopathies. Depending on the severity, there are different therapies available to help alleviate any pain and aid patients in performing varying activities. For example, many congenital myopathy patients are involved in physical or occupational therapy in an attempt to strengthen their skeletal muscles. Orthopedic surgery is usually necessary to correct skeletal deformities secondary to muscle weakness, such as scoliosis. Survival is typically determined by the level of respiratory muscle insufficiency. [2] 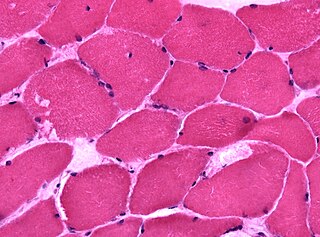 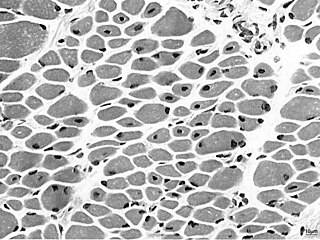 β-Tropomyosin, also known as tropomyosin beta chain is a protein that in humans is encoded by the TPM2 gene. β-tropomyosin is striated muscle-specific coiled coil dimer that functions to stabilize actin filaments and regulate muscle contraction.

Slow skeletal muscle troponin T (sTnT) is a protein that in humans is encoded by the TNNT1 gene. 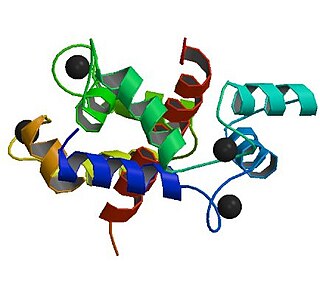 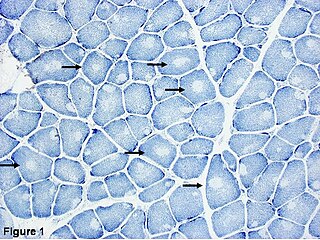 Central core disease (CCD), also known as central core myopathy, is an autosomal dominantly inherited muscle disorder present from birth that negatively affects the skeletal muscles. It was first described by Shy and Magee in 1956. It is characterized by the appearance of the myofibril under the microscope. 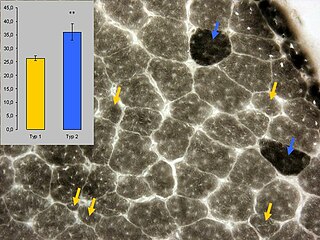 Congenital fiber type disproportion (CFTD) is an inherited form of myopathy with small type 1 muscle fibers that may occur in a number of neurological disorders. It has a relatively good outcome and follows a stable course. While the exact genetics is unclear, there is an association with mutations in the genes TPM3, ACTA1 and SEPN1. It is a rare condition. 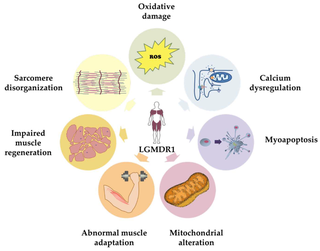