The presentation of Ullrich congenital muscular dystrophy in an affected individual is as follows: [2] [7]

Treatment for Ullrich congenital muscular dystrophy can consist of physical therapy and regular stretching to prevent and reduce contractures. Respiratory support may be needed at some point by the affected individual. [3]

Though cardiac complications are not a concern in this type of CMD, in regards to respiratory issues ventilation via a tracheostomy is a possibility in some cases. [5] [11]

The prognosis of this sub-type of MD indicates that the affected individual may eventually have feeding difficulties. Surgery, at some point, might be an option for scoliosis. [3]

Scoliosis, which is a sideways curve of the persons vertebrate, is determined by a variety of factors, including the degree (mild or severe), in which case if possible a brace might be used by the individual. [12]

In terms of possible research for Ullrich congenital muscular dystrophy one source indicates that cyclosporine A might be of benefit to individuals with this CMD type. [13]

According to a review by Bernardi, et al., cyclosporin A (CsA) used to treat collagen VI muscular dystrophies demonstrates a normalization of mitochondrial reaction to rotenone. [14] 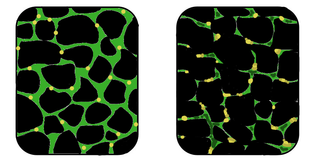 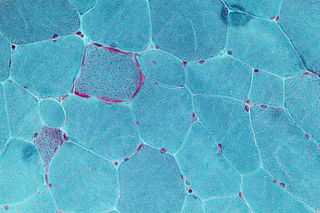 In medicine, a muscle biopsy is a procedure in which a piece of muscle tissue is removed from an organism and examined microscopically. A muscle biopsy can lead to the discovery of problems with the nervous system, connective tissue, vascular system, or musculoskeletal system. 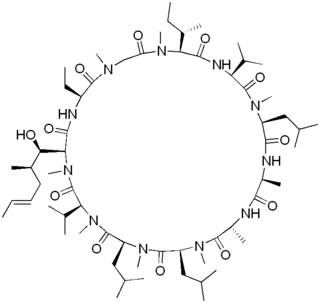 NIM811 is a mitochondrial permeability transition inhibitor. Also known as N-methyl-4-isoleucine cyclosporin, it is a four-substituted cyclosporine analogue that binds to cyclophilin, however this binary complex cannot bind to calcineurin, and therefore lacks immunosuppressive activity.

Collagen alpha-1(VI) chain is a protein that in humans is encoded by the COL6A1 gene.

Collagen alpha-2(VI) chain is a protein that in humans is encoded by the COL6A2 gene.

Collagen alpha-3(VI) chain is a protein that in humans is encoded by the COL6A3 gene. This protein is an alpha chain of type VI collagen that aids in microfibril formation. As part of type VI collagen, this protein has been implicated in Bethlem myopathy, Ullrich congenital muscular dystrophy (UCMD), and other diseases related to muscle and connective tissue.

Selenoprotein N is a protein that in humans is encoded by the SEPN1 gene.

Scholia has a topic profile for Ullrich congenital muscular dystrophy .
This page is based on this Wikipedia article
Text is available under the CC BY-SA 4.0 license; additional terms may apply.
Images, videos and audio are available under their respective licenses.