The Division of Balaclava was an Australian Electoral Division in Victoria. The division was created in 1900 and was one of the original 75 divisions contested at the first federal election. It was named for the suburb of Balaclava, which in turn was named for a battlefield of the Crimean War. It was based in the wealthy inner southern suburbs of Melbourne, including Brighton and Sandringham. It was always a safe seat for the conservative parties, being held successively by Protectionist Party, Nationalist Party, United Australia Party and Liberal Party members. It was abolished and replaced by the Division of Goldstein in 1984. [1]

Victoria is a state in south-eastern Australia. Victoria is Australia's smallest mainland state and its second-most populous state overall, thus making it the most densely populated state overall. Most of its population lives concentrated in the area surrounding Port Phillip Bay, which includes the metropolitan area of its state capital and largest city, Melbourne, Australia's second-largest city. Victoria is bordered by Bass Strait and Tasmania to the south, New South Wales to the north, the Tasman Sea to the east, and South Australia to the west.

Balaclava is an inner suburb of Melbourne, Victoria, Australia, 7 km south from Melbourne's Central Business District. Its local government area is the City of Port Phillip. At the 2011 Census, Balaclava had a population of 5,383.

Main article: Electoral results for the Division of Balaclava 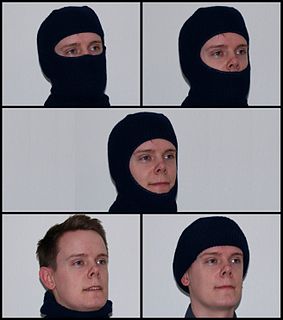 A balaclava, also known as a balaclava helmet or ski mask (US), is a form of cloth headgear designed to expose only part of the face usually the eyes and nose. Depending on style and how it is worn, only the eyes, mouth and nose, or just the front of the face are unprotected. Versions with a full face opening may be rolled into a hat to cover the crown of the head or folded down as a collar around the neck.

David Alistair Kemp, Australian politician, was a Liberal member of the Australian House of Representatives from March 1990 to October 2004, representing the Division of Goldstein, Victoria.

Andrew John Robb is a former Australian Trade Minister and was the Liberal Party member for the Division of Goldstein in the House of Representatives. Robb announced his retirement from politics on the 10 February 2016. Robb was succeeded in the portfolio by The Hon Steven Ciobo MP on the 18 February 2016. A former federal director of the Liberal Party, he was first elected to parliament at the 2004 federal election, having previously managed the party's successful campaign at the 1996 federal election, which ended 13 years of Labor government.

Sir George Turner, Australian politician, was the 18th Premier of Victoria and the first Treasurer of Australia in the federal Barton Ministry. 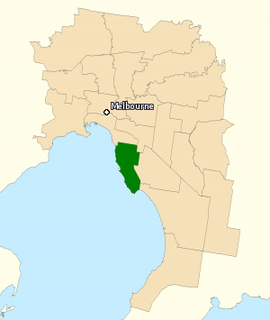 The Division of Goldstein is an Australian Electoral Division in Victoria. The division was created in 1984, when the former Division of Balaclava was abolished. It is located in the bayside suburbs of Melbourne, including Beaumaris, Bentleigh, Brighton, Caulfield South, Cheltenham, Gardenvale and Sandringham.

Caulfield North is a suburb in Melbourne, Victoria, Australia, 11 km south-east of Melbourne's central business district in the local government area is the City of Glen Eira. At the 2016 Census, Caulfield North had a population of 20,976.

Balaclava Junction is the only extant grand union in Australia. Located at the intersection of Balaclava Road and Hawthorn Road, Caulfield North on the Melbourne tram network, trams can go in all directions from all directions.

The town of Balaklava is located in South Australia, 92 kilometres north of Adelaide in the Mid North region. It is on the south bank of the Wakefield River, 25 kilometres east of Port Wakefield.

Ian Malcolm Macphee AO is an Australian former politician who was a member of the House of Representatives from 1974 until 1990. He is best known for his contributions in developing Australian multiculturalism and for being one of the most prominent moderate Liberal Party of Australia politicians. 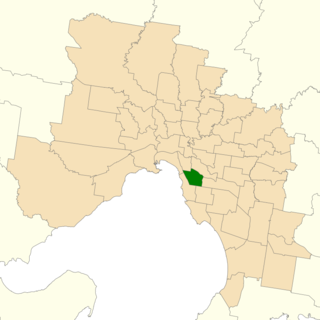 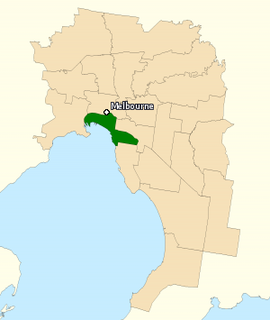 The Division of Melbourne Ports is an Australian federal electoral division in the inner south-eastern suburbs of Melbourne, Victoria, Australia. It is located to the south of Melbourne's central business district and covers an area of approximately 40 km2 around the north and north-eastern shores of Port Phillip Bay.

Christian Brothers College was founded in 1878 and is a Roman Catholic independent secondary college for boys. It is part of the Association of Edmund Rice schools. The school was originally founded and run by the Christian Brothers, however the Brothers have for many years not be involved in the running of the school. CBC St Kilda is located in the Melbourne suburb of St Kilda East with another campus in nearby Balaclava.

This article provides information on candidates who stood for the 1984 Australian federal election. The election was held on 1 December 1984.

Balaclava Bay is a bay situated on the edge of Portland Harbour, where the breakwater meets the island, at the northern end of the Isle of Portland, Dorset, in southern England. The bay is part of the Jurassic Coast, a World Heritage Site. The bay is overlooked by the Victorian East Weare Battery, built in the 1860s to protect the harbour. The nearest road within the dockyard of Portland Port is named Balaclava Road.

This is a list of electoral results for the Division of Balaclava in Australian federal elections from the division's creation in 1901 until its abolition in 1984.

The Division of Macnamara is an Australian Electoral Division in the state of Victoria, which will be contested for the first time at the 2019 federal election. The division is named in honour of Dame Jean Macnamara, a medical researcher and doctor who specialised in the polio virus and was involved in children's health initiatives.