Last updated October 09, 2022
Polyhedron associated with another by swapping vertices for faces

In geometry, every polyhedron is associated with a second dual structure, where the vertices of one correspond to the faces of the other, and the edges between pairs of vertices of one correspond to the edges between pairs of faces of the other. [1] Such dual figures remain combinatorial or abstract polyhedra, but not all can also be constructed as geometric polyhedra. [2] Starting with any given polyhedron, the dual of its dual is the original polyhedron.

There are many kinds of duality. The kinds most relevant to elementary polyhedra are polar reciprocity and topological or abstract duality.

In Euclidean space, the dual of a polyhedron

is often defined in terms of polar reciprocation about a sphere. Here, each vertex (pole) is associated with a face plane (polar plane or just polar) so that the ray from the center to the vertex is perpendicular to the plane, and the product of the distances from the center to each is equal to the square of the radius. [3]

When the sphere has radius

), then the polar dual of a convex polyhedron

denotes the standard dot product of

Typically when no sphere is specified in the construction of the dual, then the unit sphere is used, meaning

in the above definitions. [4]

For each face plane of

described by the linear equation

the corresponding vertex of the dual polyhedron

. Similarly, each vertex of

corresponds to a face plane of

, and each edge line of

corresponds to an edge line of

. The correspondence between the vertices, edges, and faces of

reverses inclusion. For example, if an edge of

contains a vertex, the corresponding edge of

will be contained in the corresponding face.

For a polyhedron with a center of symmetry, it is common to use a sphere centered on this point, as in the Dorman Luke construction (mentioned below). Failing that, for a polyhedron with a circumscribed sphere, inscribed sphere, or midsphere (one with all edges as tangents), this can be used. However, it is possible to reciprocate a polyhedron about any sphere, and the resulting form of the dual will depend on the size and position of the sphere; as the sphere is varied, so too is the dual form. The choice of center for the sphere is sufficient to define the dual up to similarity.

If a polyhedron in Euclidean space has a face plane, edge line, or vertex lying on the center of the sphere, the corresponding element of its dual will go to infinity. Since Euclidean space never reaches infinity, the projective equivalent, called extended Euclidean space, may be formed by adding the required 'plane at infinity'. Some theorists prefer to stick to Euclidean space and say that there is no dual. Meanwhile, Wenninger (1983) found a way to represent these infinite duals, in a manner suitable for making models (of some finite portion).

The concept of duality here is closely related to the duality in projective geometry, where lines and edges are interchanged. Projective polarity works well enough for convex polyhedra. But for non-convex figures such as star polyhedra, when we seek to rigorously define this form of polyhedral duality in terms of projective polarity, various problems appear. [5] Because of the definitional issues for geometric duality of non-convex polyhedra, Grünbaum (2007) argues that any proper definition of a non-convex polyhedron should include a notion of a dual polyhedron.

Any convex polyhedron can be distorted into a canonical form, in which a unit midsphere (or intersphere) exists tangent to every edge, and such that the average position of the points of tangency is the center of the sphere. This form is unique up to congruences.

For a uniform polyhedron, each face of the dual polyhedron may be derived from the original polyhedron's corresponding vertex figure by using the Dorman Luke construction. [7]

Even when a pair of polyhedra cannot be obtained by reciprocation from each other, they may be called duals of each other as long as the vertices of one correspond to the faces of the other, and the edges of one correspond to the edges of the other, in an incidence-preserving way. Such pairs of polyhedra are still topologically or abstractly dual.

An abstract polyhedron is a certain kind of partially ordered set (poset) of elements, such that incidences, or connections, between elements of the set correspond to incidences between elements (faces, edges, vertices) of a polyhedron. Every such poset has a dual poset, formed by reversing all of the order relations. If the poset is visualized as a Hasse diagram, the dual poset can be visualized simply by turning the Hasse diagram upside down.

Topologically, a self-dual polyhedron is one whose dual has exactly the same connectivity between vertices, edges and faces. Abstractly, they have the same Hasse diagram.

Every polygon (that is, a two-dimensional polyhedron) is topologically self-dual, since it has the same number of vertices as edges, and these are switched by duality. But it is not necessarily self-dual (up to rigid motion, for instance). Every polygon has a regular form which is geometrically self-dual about its intersphere: all angles are congruent, as are all edges, so under duality these congruences swap.

There are infinitely many geometrically self-dual polyhedra. The simplest infinite family are the canonical pyramids of n sides. Another infinite family, elongated pyramids, consists of polyhedra that can be roughly described as a pyramid sitting on top of a prism (with the same number of sides). Adding a frustum (pyramid with the top cut off) below the prism generates another infinite family, and so on.

There are many other convex, self-dual polyhedra. For example, there are 6 different ones with 7 vertices, and 16 with 8 vertices. [8]

A self-dual non-convex icosahedron with hexagonal faces was identified by Brückner in 1900. [9] [10] [11] Other non-convex self-dual polyhedra have been found, under certain definitions of non-convex polyhedra and their duals.

Duality can be generalized to n-dimensional space and dual polytopes; in two dimension these are called dual polygons.

The self-dual regular polytopes are: 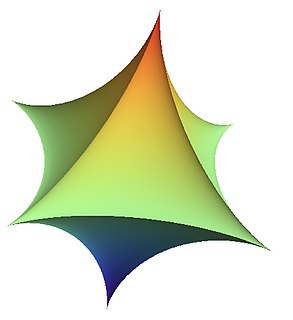