Cameo is an American soul-influenced funk group that formed in 1974. Cameo was initially a 14-member group known as the New York City Players; this name was later changed to Cameo.

Charles Wright & the Watts 103rd Street Rhythm Band is an American soul and funk band. Formed in the early 1960s, they had the most visibility from 1967 to 1973 when the band had 9 singles reach Billboard's pop and/or rhythm and blues charts, such as "Do Your Thing", "Till You Get Enough", and "Love Land". They are best known for their biggest hit on Warner Bros. Records, 1970's "Express Yourself", a song that has been sampled by rap group N.W.A and others.

Larry Ernest Blackmon is an American vocalist and musician who gained acclaim as the lead singer and founder frontman of the funk and R&B band Cameo.

William Edwards Blackmon is a former American football safety and return specialist. He played college football for the Boston College Eagles, and was drafted in the fourth round of the 2006 NFL Draft by the Green Bay Packers. He has also played for the New York Giants, Seattle Seahawks, Jacksonville Jaguars, Washington Redskins, and briefly for the Saskatchewan Roughriders of the Canadian Football League. 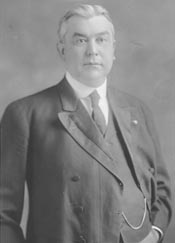 Fred Leonard Blackmon was a U.S. Representative from Alabama.

George Edward Alcorn Jr. is an American physicist, engineer, inventor, and distinguished professor. He taught at Howard University and the University of the District of Columbia, and worked primarily for IBM and NASA. He has over 30 inventions and 8 patents resulting in his induction into the National Inventors Hall of Fame in 2015.

Douglas A. Blackmon is an American writer and journalist who won a Pulitzer Prize in 2009 for his book, Slavery by Another Name: The Re-Enslavement of Black Americans from the Civil War to World War II.

Justin Carl Blackmon is a former American football wide receiver. He played college football at Oklahoma State, where he was twice recognized as a consensus All-American, before being drafted by the Jacksonville Jaguars fifth overall in the 2012 NFL Draft. With the Jaguars, he was suspended for the first four games of the 2013 season for violations of the NFL's substance abuse policy before being suspended indefinitely for another violation later that season and has not played since.

Charles Cobb Blackmon, nicknamed "Chuck Nazty", is an American professional baseball outfielder for the Colorado Rockies of Major League Baseball (MLB). He made his MLB debut on June 7, 2011, as a member of the Rockies. Blackmon throws and bats left-handed, stands 6 feet 3 inches (1.91 m), and weighs 210 pounds (95 kg).

Brenda Blackmon is an American anchor based in New York City. Blackmon most recently anchored the PIX11 News weeknights at 6:30 with Kaity Tong. Blackmon joined the station in 2016 as an anchor. She first co-anchored in New York at WWOR-TV with Rolland Smith then Sean Mooney then Ernie Anastos and finally Harry Martin.

Evelyn Kinnison Blackmon was a Realtor from West Monroe, Louisiana, USA, and from 1984 to 1988 a Democratic member of the Louisiana House of Representatives from District 15, the first and thus far only woman to hold that particular legislative seat.

James Blackmon Jr. is an American basketball player for Beşiktaş of the Turkish League (BCL) and Basketball Champions League (BCL). He played college basketball for the Indiana Hoosiers.

Clarence Blackmon Jr. was an American basketball coach. He was Alabama A&M University's head men's basketball coach from 1972 to 1981 and compiled a 111–119 overall record.

Tristan Michael Blackmon is an American professional soccer player who plays as a defender for MLS club Los Angeles FC.

Shaw Blackmon is an American politician from Georgia. Blackmon is a Republican member of Georgia House of Representatives from the 146th district since 2015.

Julian Blackmon is an American football safety for the Indianapolis Colts of the National Football League (NFL). He played college football at Utah.

Traci D. Blackmon is an ordained minister who serves as the Associate General Minister of Justice and Local Church Ministries for the United Church of Christ. She is the former senior pastor of Christ the King United Church of Christ, Florissant, Missouri and the leading voice of frontline spiritual leaders influential in leading prayer vigils and engaging in peaceful protests during the unrest in Ferguson, Missouri after the murder of Michael Brown in 2014.