Everett Community College (EvCC) is a community college in Everett, Washington, in the Seattle metropolitan area. EvCC educates more than 19,000 students every year at locations throughout Snohomish County, Washington with most students and faculty at the main campus in Everett. [1]

Everett Junior College (EJC) was founded in 1941, [2] with the college's first students taking classes at a converted elementary school. [3] In 1957, construction began on a new college campus in north Everett. The campus, which originally included seven buildings, opened in 1958.

On February 16, 1987, an arson fire broke out at the college's library that destroyed the main student services building and killed firefighter Gary Parks. The arson destroyed 48,000 books and remained unsolved for decades. [4] [5] In 2021 Elmer Nash pleaded guilty to the death of Gary Parks. Nash was 12 years old at the time of the blaze and revealed he had started the fire with matches in order to conceal evidence of theft. [6] A new library and service building was opened in October 1988 at the same site and dedicated to Parks, who was honored with a statue in the courtyard. [7] The building cost $8 million to construct and stock with new books, using funds from the state legislature and private donations. [8]

Everett Community College's north Everett campus is located at 2000 Tower St. in Everett on 46 acres near the Legion Memorial Park Golf Course. The campus includes 20 buildings, many of them named after the peaks of the Cascade and Olympic mountain ranges. [9]

In the past 10 years, EvCC has completed more than $150 million of new construction:

The Nippon Business Institute at EvCC was founded in 1987 to provide education in Japanese language and culture, in part due to Everett's relationships with Japanese partners. [17] The school's building is located at the southwest end of the campus and includes Nishiyama Garden, a traditional Japanese garden with Sukiya-zukuri wooden gates, gravel paths, and a portion of the Kintai Bridge from Iwakuni, Japan, one of Everett's sister cities. [18] [19]

In addition to the college's main campus in north Everett, EvCC offers classes at its East County Campus in Monroe, Aviation Maintenance Technical School at Paine Field, Corporate & Continuing Education Center in south Everett, School of Cosmetology in Marysville, and at several other locations in north and east Snohomish County.

EvCC is one of 34 community and technical colleges governed by the Washington State Board of Community and Technical Colleges. The college is administered by a five-member board of trustees [20] appointed by Washington state's governor. EvCC's president is Dr. Daria J. Willis. [21]

EvCC also offers professional development and career training options through its Corporate & Continuing Education Center. [23] Courses can be customized and delivered on-site throughout Snohomish County and the Northwest.

In addition to traditional classroom courses, EvCC offers courses that can be taken online through the CANVAS learning platform.

Central Washington University (CWU) is a public university in Ellensburg, Washington. Founded in 1891, the university consists of four divisions: the President's Division, Business and Financial Affairs, Operations, and Academic and Student Life (ASL). Within ASL are four colleges: the College of Arts and Humanities, the College of Business, the College of Education and Professional Studies, and College of the Sciences. CWU is considered an emerging Hispanic-Serving Institution with 15 percent Hispanic students. 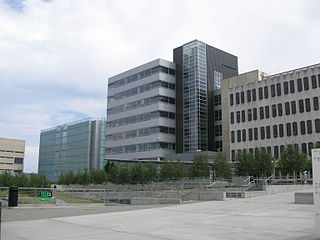 Snohomish County is a county located in the U.S. state of Washington. With an estimated population of 830,393 as of 2020, it is the third-most populous county in Washington, after nearby King and Pierce counties, and the 75th-most populous in the United States. The county seat and largest city is Everett. The county was created out of Island County on January 14, 1861 and is named for the Snohomish tribe.

Arlington is a city in northern Snohomish County, Washington, United States, part of the Seattle metropolitan area. The city lies on the Stillaguamish River in the western foothills of the Cascade Range, adjacent to the city of Marysville. It is approximately 10 miles (16 km) north of Everett, the county seat, and 40 miles (64 km) north of Seattle, the region's largest city. As of the 2010 U.S. census, Arlington has a population of 17,926. 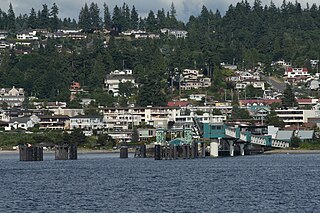 Edmonds is a city in Snohomish County, Washington, United States. It is located in the southwest corner of the county, facing Puget Sound and the Olympic Mountains to the west. The city is part of the Seattle metropolitan area and is located 15 miles (24 km) north of Seattle and 18 miles (29 km) southwest of Everett. With a population of 39,709 residents in the 2010 U.S. census, Edmonds is the third most populous city in the county. The estimated population in 2019 was 42,605.

Lake Stevens is a city in Snohomish County, Washington, United States, that is named for the lake it surrounds. It is located 6 miles (9.7 km) east of Everett and borders the cities of Marysville to the northwest and Snohomish to the south. The city's population was 28,069 at the 2010 census, but has since grown to an estimated 33,911. 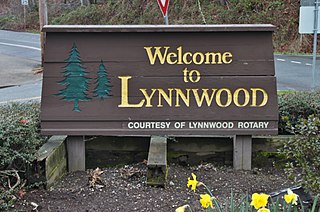 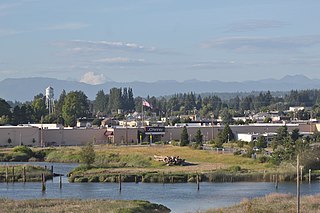 Marysville is a city in Snohomish County, Washington, United States, part of the Seattle metropolitan area. The city is located 35 miles (56 km) north of Seattle, adjacent to Everett on the north side of the Snohomish River delta. It is the second-largest city in Snohomish County after Everett, with a population of 60,020 in the 2010 U.S. census. As of 2015, Marysville is also the fastest-growing city in Washington state, growing at an annual rate of 2.5 percent.

Monroe is a city in Snohomish County, Washington, United States. It is located at the confluence of the Skykomish, Snohomish, and Snoqualmie rivers in the Cascade foothills, about 30 miles (48 km) northeast of Seattle. Monroe's population was 17,304 as of the 2010 census and was estimated to be 19,776 in 2019.

Mountlake Terrace is a suburban city in Snohomish County, Washington, United States. It lies on the southern border of the county, adjacent to Shoreline and Lynnwood, and is 13 miles (21 km) north of Seattle. The city had a population of 19,909 people counted in the 2010 census.

Snohomish is a city in Snohomish County, Washington, United States. The population was 9,098 at the 2010 census. It is located on the Snohomish River, southeast of Everett and northwest of Monroe. Snohomish lies at the intersection of U.S. Route 2 and State Route 9. The city's airport, Harvey Airfield, is located south of downtown and used primarily for general aviation.

Seattle Central College is a public college in Seattle, Washington. With North Seattle College and South Seattle College, it is one of the three colleges that comprise the Seattle Colleges District. The college has a substantial international student population served by the International Education Programs division as well as many immigrant and refugee students taking ESL courses through the Basic and Transitional Studies division. Seattle Central College also encompasses the Wood Construction Center and Seattle Maritime Academy, which are on separate campuses to house the very specific tools and workspaces needed. 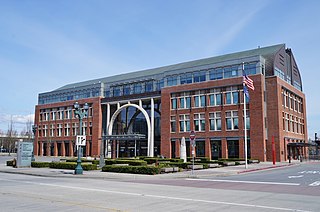 Everett Station is an Amtrak train station serving the city of Everett, Washington. The station has provided service to the Cascades and Empire Builder routes since its opening in 2002, replacing an earlier station near the Port of Everett. The four-story building also houses social service programs and is the center of a 10-acre (4 ha) complex that includes parking lots and a large bus station used primarily by Community Transit, Everett Transit, and Sound Transit Express. The station has served as the northern terminus of the Sounder North Line since 2003 and the Swift Blue Line since 2009. It consists of two side platforms, one serving Amtrak and the other serving Sounder commuter trains. Everett Station also functions as a park and ride, with 1,067 short-term parking spaces located in lots around the station after it was expanded by Sound Transit in 2009. 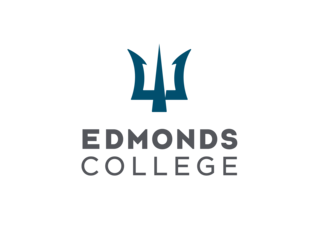 Edmonds College, formerly Edmonds Community College, is a public community college in Lynnwood, Washington. More than 17,000 students annually take courses for credit toward a certificate or degree at the college. The college employs more than 1,300 people, including 126 full-time and 283 part-time instructors and 267 students.

Nathan Mumm is a Snohomish County multi-business executive. Born in 1973, his success in both property management, and technology investments have allowed him the ability to venture in many local businesses. He is the current radio talk show host for TechTimeRadio with Nathan Mumm. He was the original owner of the Snohomish County Explosion that played in the National Athletic Basketball League and International Basketball League. He is currently the President of Courtyard Media Foundation, a non-profit foundation in Snohomish County. Mumm is known as a key leader in Snohomish County regarding business and entertainment. He was the founder of the National Athletic Basketball League and was the commissioner and compliance director. Growing up in the town of Marysville he graduated from Marysville Pilchuck High School in 1992. He currently lives in the town of Snohomish, Washington. 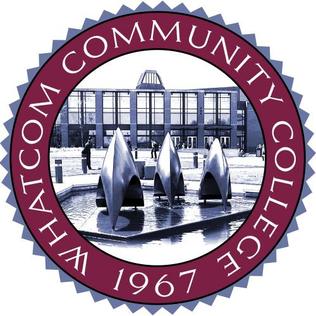 Whatcom Community College is a public community college in Bellingham, Washington, in Whatcom County. Established in 1967, Whatcom has been accredited by the Northwest Commission on Colleges and Universities since 1976. 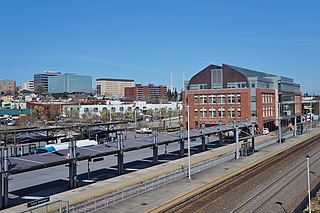 Everett is the county seat of and the largest city in Snohomish County, Washington, United States. It is 25 miles (40 km) north of Seattle and is one of the main cities in the metropolitan area and the Puget Sound region. Everett is the seventh-largest city in the state by population, with 103,019 residents at the 2010 census. The city is primarily situated on a peninsula at the mouth of the Snohomish River along Port Gardner Bay, an inlet of Possession Sound, and extends to the south and west.

The University Center of North Puget Sound is a "center of universities" located in Gray Wolf Hall on Everett Community College's main campus in Everett, WA. The University Center supports over 25 bachelor's and master's degrees from public and private partner universities and colleges to the residents of Snohomish, Island and Skagit Counties. The Center's flexible scheduling in combination with varied teaching modalities, means that classes are available to fit busy lives.