Evington is an Electoral ward and administrative division of the city of Leicester, England. It used to be a small village centred on Main Street and the Anglican church of St Denys but was close enough to Leicester to become one of the outer suburbs in the 1930s. Today, the ward comprises the historical village of Evington, as well as the modern ex-council estates of Rowlatts Hill and Goodwood. The population of the ward at the 2011 census was 11,133. [1]

The name Evington comes from the Anglo-Saxon name Aefa's Tun. [2] After the Norman conquest the land was given to Hugh de Grentesmesnil. [2] The first known spelling Evington was of Walter de Evington 1259 who leased a carucate of land at the village of Evington – about 100 acres (0.40 km2). The parish of Evington was originally quite large and included the areas now known as North Evington and Evington Valley. These were annexed by the borough of Leicester in 1892, and are not generally considered part of Evington. [3]

In 1935, the boundaries of Leicester (by this point a city), were expanded again, including nearly all of the remaining parish of Evington, except for a small part which went to Oadby. The modern ward does include the large 1950s development based at Downing Drive and Spencefield Lane. [3]

Evington village has been a conservation area since 1989. [4]

Rowlatts Hill is a council estate established on a hillside to the north of Leicester General Hospital in 1964–67 by the City Architect Stephen George with two 22-story blocks of flats and single or two-storey houses of grey brick. A later development (1973–77) is of red brick houses. [5] For council housing purposes it is considered separate from Evington. [6]

Goodwood is a 1950s council estate considered together with Evington for council housing purposes. [6] [7] It is just under 1000 residences. [8]

Evington Village Green is a triangle of land bounded to the north by Main Street, on the Southwest by High Street and to the east by Church Street. The village war memorial is located on the northeast corner. On the west corner is a Baptist Chapel and a building called the Manse. [9] It is largely open space for recreation, with a large old oak tree in the south-east corner. [9] It also features a newly refurbished children's playground, funded by the Friends of Evington Village Green. It is the site of the Evington Village Fete and Show, held annually.

Evington park is some 44 acres (0.18 km2) of public parkland, opened in 1948, formerly the estate of Evington House (built 1836) which is used as offices and some public amenities. [2] It contains many mature trees, including a Mulberry dating from about the same time as the house. There are public exercise machines as well as tennis courts, football and cricket pitches and bowling greens. More recently, a concrete table tennis table has been added and is situated near the tennis courts. Public toilets have also been built near the courts. [10]

This was established as a public amenity in 1970 and consists of an area south of St Denys Church, bounded on the west by a golf course, with more than 500 trees largely planted in taxonomic groups. [11] [12] In the northmost area, many individual trees are planted by arrangement with the council as memorials to people who have died. [11]

This is Scheduled monument (SM17026), often known as 'Piggy's Hollow', consisting of the remains of the moats of a manor house built in the late 13th century by John de Grey. [13] [14] It is on the north side of the Arboretum and adjacent to St Denys Church on the west.

The Church of England church of St Denys has been the parish church for almost 800 years, having been dedicated on 9 October 1219 by the Bishop of Lincoln. [15] It is a Grade II* listed building. [16] The tower and spire are original: the South and North Aisles date from the 14th century, and the Chancel from the 19th century. [15] Its rare ring of 4 bells was augmented to six following an appeal in the late 1980s. [10] The interior includes 3 stained glass windows from 1870. [16]

Evington Chapel is a Baptist Church on the corner of Main Street and High Street, by Evington Village Green. [17] [18] It is an 1837 Gothic style with slate roof, and a Grade II listed building. [19]

Evington has two main shopping centres: the first largely based in a modern development near the old village and including the local library, and the second towards the northern end of Downing Drive. Public houses include the Cedars in the old village and the Dove in Downing Drive. The Village Hall is a brick building on Church Lane, opposite St Denys: its foundation stone calls it King George V Hall and is dated MDCDXII (1912).

Evington is home to the Leicestershire Golf Club, on the south of the village, and west of the arboretum. [23]

The largest employer in the area is the Leicester General hospital, located near Goodwood on Coleman Road which is south of Uppingham Road (the A47).

The Evington Echo is the community newspaper. It is produced by volunteers and is delivered free of charge to 5,800 houses in the area. It was first published in 1981 and the current (2013) editor is Helen Pettman. [24]

Schools in the area

Evington Hall is a Grade II listed building (built about 1840) [26] which in the past was a convent school, [3] then part of Leicester Junior Grammar School, but is now part of a Hindu faith school which opened in September 2011. [27] [28]

Evington was the home of England Football international Emile Heskey.[ citation needed ] Both Emile Heskey and Gary Lineker (Winner of the Golden Boot) attended the City of Leicester College in Evington, as did former Labour media advisor Alastair Campbell and Dr Nicholas Shepherd (Co-founder of the internet). Heskey and Shepherd were both pupils at Linden Primary school in Evington.[ citation needed ] What is now the Cedars public house and restaurant on the corner of Main Street and School Lane was formerly the home of novelist E. Phillips Oppenheim. [3] Novelist J.B. Priestley was evacuated to North Evington Hospital after being wounded in France in 1916. [29] 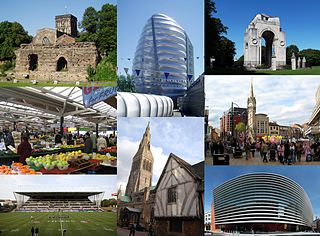 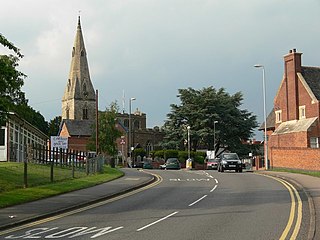 Normanton is an inner city suburb and ward of the city of Derby in Derbyshire, England, situated approximately 2 miles (3.2 km) south of the city centre. Neighbouring suburbs include Littleover, Pear Tree, Rose Hill and Sunny Hill. The original village of Normanton-by-Derby, which now forms the southern part of the suburb, dates back to the medieval period. As the Normanton area became rapidly urbanised in the 19th century, the New Normanton area to the north was developed for housing, linking the old village to Derby, into which it was eventually absorbed. The area is characterised by high density late 19th century terraced housing in New Normanton and mid-20th century housing estates elsewhere, and has the most ethnically diverse population in Derby. The Normanton ward had a population of 17,071 in 2011. 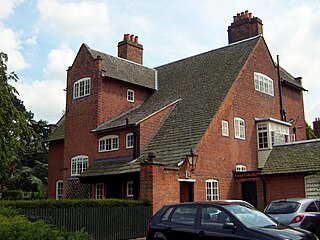 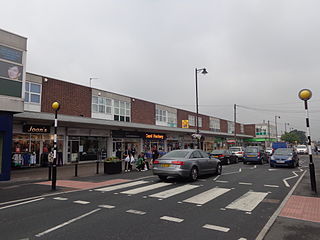 Betws is a small village and community on the River Amman, some 15 miles north of Swansea, Wales; it is part of the ecclesiastical parish of Betws and Ammanford, and the urban area of Ammanford. The nearby mountain, at the western end of the Black Mountain, is named after the village, and has a large area of common land.

Highfields is an inner city area of Leicester, England. As the name suggests, it is one of the highest areas in the city, on high ground southeast of the city centre. To the west the area is bounded by the Midland Main Line, to the south by London Road (A6), and to the east by East Park Road. To the north is Spinney Hills, though there is no clear boundary between the two areas, and Spinney Hills is often considered to be part of Highfields. The neighbourhood is within walking distance of the city centre of Leicester and offers many amenities for religious, social, cultural and commercial activities. The population is split between the Spinney Hills, Wycliffe and Stoneygate wards of the Leicester City Council. 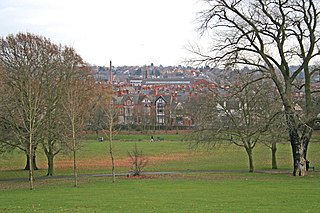 Spinney Hills is an inner city area of Leicester, England. It is situated to the north of the core Highfields area, around Spinney Hill Park. To the north is Northfields, to the east North Evington, to the west is the railway line, and to the south is the main part of Highfields. It is also a ward of the City of Leicester whose population at the 2011 census was 25,561.

Grangetown is a district and community in the south of Cardiff, capital of Wales. It is one of the largest districts in the south of the city and is bordered by Riverside, Canton and Butetown. The River Taff winds its way through the area. Adjacent to the city's Cardiff Bay area, Grangetown is benefitting from the nearby developments and is experiencing a period of gentrification and improvements in its infrastructure. Its population as of 2011 was 19,385 in 8,261 households. One of the "five towns of Cardiff", the others are Butetown, Crockherbtown, Newtown and Temperance Town.

Eyres Monsell is an electoral ward, administrative division, and urban suburb in Leicester, a of Leicestershire, England.

Castle is an electoral ward and area of Bedford, Bedfordshire, England. 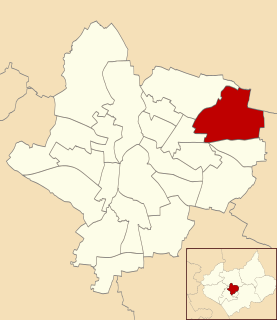 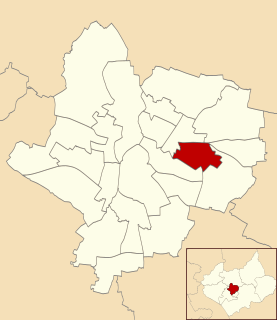 Coleman is an electoral ward and administrative division of the city of Leicester, England, consisting of the Leicester suburbs of Crown Hills and North Evington. 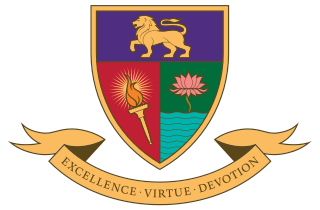 Krishna Avanti Primary School, Leicester is a Hindu faith primary school in Leicester, United Kingdom that is part of the Avanti Schools Trust. It was the first state-funded Hindu school in Leicester. The school is open to students of Hindu background, but half (50%) of places available in the school are also reserved for local students of various faith backgrounds. The school is based at Evington Hall, a Grade II listed building, built about 1840, which in the past was a convent school, then part of Leicester Junior Grammar School.

Judgemeadow Community College is a mixed academy secondary school, located in the Evington area of Leicester in the English county of Leicestershire.