An explanatory dictionary or monolingual dictionary is a dictionary that gives additional information, e. g. on pronunciation, grammar, meaning, etymology etc. [1] Such dictionaries are usually meant for the native speakers of the language.

Pronunciation is the way in which a word or a language is spoken. This may refer to generally agreed-upon sequences of sounds used in speaking a given word or language in a specific dialect, or simply the way a particular individual speaks a word or language.

In linguistics, grammar is the set of structural rules governing the composition of clauses, phrases, and words in any given natural language. The term refers also to the study of such rules, and this field includes phonology, morphology, and syntax, often complemented by phonetics, semantics, and pragmatics. 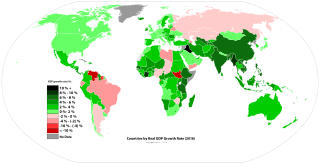 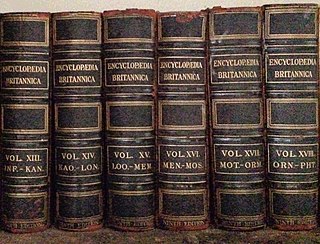 The terms foobar, or foo and others are used as placeholder names in computer programming or computer-related documentation. They have been used to name entities such as variables, functions, and commands whose exact identity is unimportant and serve only to demonstrate a concept.

The Oxford English Dictionary (OED) is the principal historical dictionary of the English language, published by Oxford University Press. It traces the historical development of the English language, providing a comprehensive resource to scholars and academic researchers, as well as describing usage in its many variations throughout the world. The second edition, comprising 21,728 pages in 20 volumes, was published in 1989.

An eponym is a person, place, or thing after whom or after which something is named, or believed to be named. The adjectives derived from eponym include eponymous and eponymic. For example, Elizabeth I of England is the eponym of the Elizabethan era, and "the eponymous founder of the Ford Motor Company" refers to Henry Ford. Recent usage, especially in the recorded-music industry, also allows eponymous to mean "named after its central character or creator".

A synonym is a word or phrase that means exactly or nearly the same as another lexeme in the same language. Words that are synonyms are said to be synonymous, and the state of being a synonym is called synonymy. For example, the words begin, start, commence, and initiate are all synonyms of one another. Words are typically synonymous in one particular sense: for example, long and extended in the context long time or extended time are synonymous, but long cannot be used in the phrase extended family. Synonyms with the exact same meaning share a seme or denotational sememe, whereas those with inexactly similar meanings share a broader denotational or connotational sememe and thus overlap within a semantic field. The former are sometimes called cognitive synonyms and the latter, near-synonyms, plesionyms or poecilonyms.

Pansexuality, or omnisexuality, is the sexual, romantic or emotional attraction towards people regardless of their sex or gender identity. Pansexual people may refer to themselves as gender-blind, asserting that gender and sex are not determining factors in their romantic or sexual attraction to others.

Many of the differences between American and British English date back to a time when spelling standards had not yet developed. For instance, some spellings seen as "American" today were once commonly used in Britain and some spellings seen as "British" were once commonly used in the United States. A "British standard" began to emerge following the 1755 publication of Samuel Johnson's A Dictionary of the English Language, and an "American standard" started following the work of Noah Webster and in particular his An American Dictionary of the English Language, first published in 1828.

Urban Dictionary is a crowdsourced online dictionary for slang words and phrases, operating under the motto "Define Your World." The website was founded in 1999 by Aaron Peckham. Originally, Urban Dictionary was intended as a dictionary of slang, or cultural words or phrases, not typically found in standard dictionaries, but it is now used to define any word, event or phrase. Words or phrases on Urban Dictionary may have multiple definitions, usage examples, and tags. Some examples are "Angry Hitler" or "Russian Candy Cane." As of 2014, the dictionary had over seven million definitions, while 2,000 new entries were being added daily.

The chairman is the highest officer of an organized group such as a board, a committee, or a deliberative assembly. The person holding the office is typically elected or appointed by the members of the group, and the chairman presides over meetings of the assembled group and conducts its business in an orderly fashion. 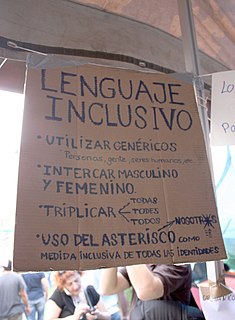 Gender-neutral language or gender-inclusive language is language that avoids bias towards a particular sex or social gender. In English, this includes use of nouns that are not gender-specific to refer to roles or professions, as well as avoidance of the pronouns he, him and his to refer to people of unknown or indeterminate gender. For example, the words policeman and stewardess are gender-specific job titles; the corresponding gender-neutral terms are police officer and flight attendant. Other gender-specific terms, such as actor and actress, may be replaced by the originally male term; for example, actor used regardless of gender. Some terms, such as chairman, that contain the component -man but have traditionally been used to refer to persons regardless of sex are now seen by some as gender-specific. When the gender of the person referred to is unknown or indeterminate, the third-person pronoun he may be avoided by using gender-neutral alternatives – possibilities in English include singular they, he or she, or s/he. 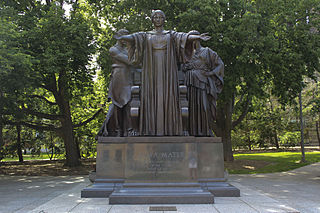 An alumnus or an alumna of a college, university, or other school is a former student who has either attended or graduated in some fashion from the institution. The word is Latin and simply means student. The plural is alumni for men and mixed groups and alumnae for women. The term is not synonymous with "graduate"; one can be an alumnus without graduating. An alumnus can also be and is more recently expanded to include a former employee of an organization and it may also apply to a former member, contributor, or inmate.

A pejorative is a word or grammatical form expressing a negative connotation or a low opinion of someone or something, showing a lack of respect for someone or something. It is also used to express criticism, hostility, or disregard. A term can be regarded as pejorative in some social or ethnic groups but not in others. Sometimes, a term may begin as a pejorative and eventually be adopted in a non-pejorative sense in some or all contexts.