Flagstone (flag) is a generic flat stone, sometimes cut in regular rectangular or square shape and usually used for paving slabs or walkways, patios, flooring, fences and roofing. It may be used for memorials, headstones, facades and other construction. The name derives from Middle English flagge meaning turf, perhaps from Old Norse flaga meaning slab or chip. [1]

Flagstone is a sedimentary rock that is split into layers along bedding planes. Flagstone is usually a form of a sandstone composed of feldspar and quartz and is arenaceous in grain size (0.16 mm – 2 mm in diameter). The material that binds flagstone is usually composed of silica, calcite, or iron oxide. The rock color usually comes from these cementing materials. Typical flagstone colors are red, blue, and buff, though exotic colors exist.

Flagstone is quarried in places with bedded sedimentary rocks with fissile bedding planes.

Around the thirteenth century, the ceilings, walls and floors in European architecture became more ornate. Anglo-Saxons in particular used flagstones as flooring materials in the interior rooms of castles and other structures. [2] Lindisfarne Castle in England and Muchalls Castle (14th century) in Scotland are among many examples of buildings with surviving flagstone floors.

Flagstone shingles are a traditional roofing material, a type of roof shingle commonly used in the Alps, where they are laid dry, often held in place with pegs or hooks. In the Aosta Valley, Italy, stone shingles are mandatory to cover buildings in historical areas. 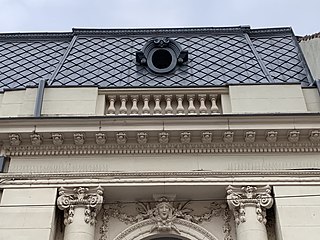 A roof is the top covering of a building, including all materials and constructions necessary to support it on the walls of the building or on uprights; it provides protection against rain, snow, sunlight, extremes of temperature, and wind. A roof is part of the building envelope. 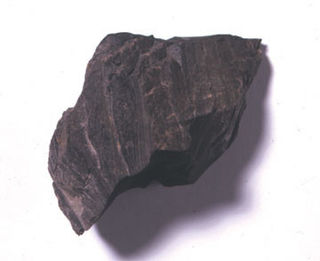 Shale is a fine-grained, clastic sedimentary rock, composed of mud that is a mix of flakes of clay minerals and tiny fragments of other minerals, especially quartz and calcite. Shale is characterized by breaks along thin laminae or parallel layering or bedding less than one centimeter in thickness, called fissility. It is the most common sedimentary rock.

Slate is a fine-grained, foliated, homogeneous metamorphic rock derived from an original shale-type sedimentary rock composed of clay or volcanic ash through low-grade regional metamorphism. It is the finest grained foliated metamorphic rock. Foliation may not correspond to the original sedimentary layering, but instead is in planes perpendicular to the direction of metamorphic compression.

A floor is the bottom surface of a room or vehicle. Floors vary from simple dirt in a cave to many-layered surfaces made with modern technology. Floors may be stone, wood, bamboo, metal or any other material that can support the expected load.

Flooring is the general term for a permanent covering of a floor, or for the work of installing such a floor covering. Floor covering is a term to generically describe any finish material applied over a floor structure to provide a walking surface. Both terms are used interchangeably but floor covering refers more to loose-laid materials. 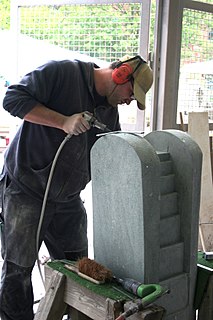 Stonemasonry or stonecraft is the creation of buildings, structures, and sculpture using stone as the primary material. It is one of the oldest activities and professions in human history. Many of the long-lasting, ancient shelters, temples, monuments, artifacts, fortifications, roads, bridges, and entire cities were built of stone. Famous works of stonemasonry include the Egyptian Pyramids, the Taj Mahal, Cusco's Incan Wall, Easter Island's statues, Angkor Wat, Borobudur, Tihuanaco, Tenochtitlan, Persepolis, the Parthenon, Stonehenge, the Great Wall of China, Chartres Cathedral. 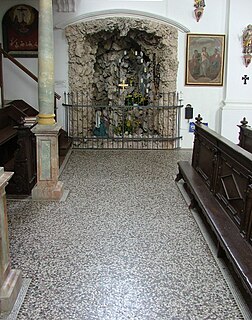 Terrazzo is a composite material, poured in place or precast, which is used for floor and wall treatments. It consists of chips of marble, quartz, granite, glass, or other suitable material, poured with a cementitious binder, polymeric, or a combination of both. Metal strips often divide sections, or changes in color or material in a pattern. Additional chips may be sprinkled atop the mix before it sets. After it is cured it is ground and polished smooth or otherwise finished to produce a uniformly textured surface. "Terrazzo" is also often to used to describe any pattern similar to the original terrazzo floors. 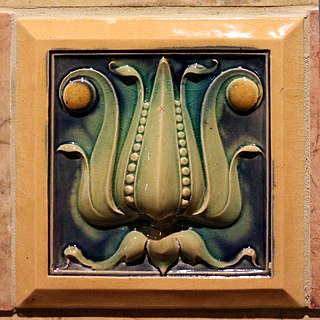 A tile is a thin object usually square or rectangular in shape. Tile is a manufactured piece of hard-wearing material such as ceramic, stone, metal, baked clay, or even glass, generally used for covering roofs, floors, walls, or other objects such as tabletops. Alternatively, tile can sometimes refer to similar units made from lightweight materials such as perlite, wood, and mineral wool, typically used for wall and ceiling applications. In another sense, a tile is a construction tile or similar object, such as rectangular counters used in playing games. The word is derived from the French word tuile, which is, in turn, from the Latin word tegula, meaning a roof tile composed of fired clay.

Underlay or underlayment generally refers to a thin layer of cushioning made of materials such as sponge rubber, foam, felt, crumb rubber, or recycled plastic; this material is laid beneath carpeting to provide comfort underfoot, to reduce wear on the carpet, and to provide insulation against sound, moisture, and heat. In general, it is a layer which is underneath another layer, so underlay is thus also used to describe many different surface-covering products. 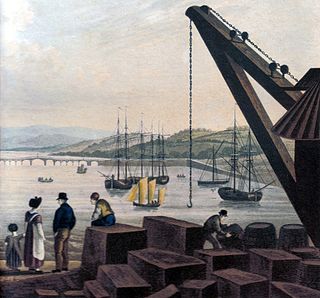 Dimension stone is natural stone or rock that has been selected and finished to specific sizes or shapes. Color, texture and pattern, and surface finish of the stone are also normal requirements. Another important selection criterion is durability: the time measure of the ability of dimension stone to endure and to maintain its essential and distinctive characteristics of strength, resistance to decay, and appearance. 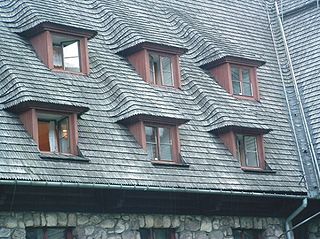 Roof shingles are a roof covering consisting of individual overlapping elements. These elements are typically flat, rectangular shapes laid in courses from the bottom edge of the roof up, with each successive course overlapping the joints below. Shingles are made of various materials such as wood, slate, flagstone, metal, plastic, and composite materials such as fibre cement and asphalt shingles. Ceramic roof tiles, which still dominate in Europe and some parts of Asia, are still usually called tiles. Roof shingles may deteriorate faster and need to repel more water than wall shingles. They are a very common roofing material in the United States.

Wood shingles are thin, tapered pieces of wood primarily used to cover roofs and walls of buildings to protect them from the weather. Historically shingles were split from straight grained, knot free bolts of wood. Today shingles are mostly made by being cut which distinguishes them from shakes which are made by being split out of a bolt. 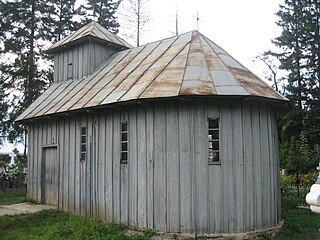 A batten is most commonly a strip of solid material, historically wood but can also be of plastic, metal, or fiberglass. Battens are variously used in construction, sailing, and other fields.

A metal roof is a roofing system made from metal pieces or tiles characterized by its high resistance, impermeability and longevity. It is a component of the building envelope. Zinc, copper and steel alloys are commonly used.

The slate industry is the industry related to the extraction and processing of slate. Slate is either quarried from a slate quarry or reached by tunneling in a slate mine. Common uses for slate include as a roofing material, a flooring material, gravestones and memorial tablets, and for electrical insulation. Slate mines are found around the world and the major slate mining region in the United Kingdom is Wales: in Cornwall there are a number of slate quarries and in the Lake District there are numerous slate mines and quarries.

Flagstone may refer to: 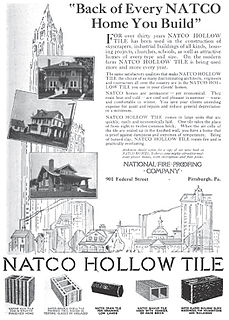 Structural clay tile describes a category of burned-clay building materials used to construct roofing, walls, and flooring for structural and non-structural purposes, especially in fireproofing applications. Also called building tile, structural terra cotta, hollow tile, and clay block, the material is an extruded clay shape with substantial depth that allows it to be laid in the same manner as other clay or concrete masonry. In North America it was chiefly used during the late 19th and early 20th centuries, reaching peak popularity at the turn of the century and declining around the 1950s. Structural clay tile grew in popularity in the end of the nineteenth-century because it could be constructed faster, was lighter, and required simpler flat falsework than earlier brick vaulting construction. Each unit is generally made of clay or terra-cotta with hollow cavities, or cells, inside it. The material is commonly used in floor arches, fireproofing, partition walls, and furring. It continues to be used in Europe to build fire-resistant walls and partitions. In North America the material has largely been replaced by concrete masonry units.