Football at the 1908 Summer Olympics

At the 1908 Summer Olympics in London, Great Britain, an official football tournament between national representative selections was contested for the first time: football at the two previous games had been played between club teams. [1] [2] Eight teams entered (including two from France, the main team and a "B" side) [3] , although Hungary and Bohemia withdrew before the start. Denmark's Sophus "Krølben" Nielsen set a record by scoring 10 goals in a 17-1 win against France. Great Britain won the gold. Among those representing the Danish team was the famous mathematician Harald Bohr.

The French were so shocked by their 17–1 defeat against Denmark that they declined to play for the bronze medal; therefore, the Netherlands played Sweden for third place. [6] 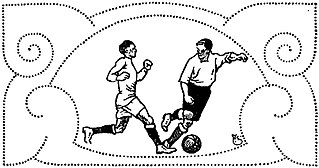 At the 1908 Summer Olympics, two gymnastics events for men were contested. No nation was successful in winning more than one medal.

At the 1908 Summer Olympics, a field hockey tournament was contested for the first time. Six teams entered the tournament: England, Ireland, Scotland, Wales, Germany and France. England won the gold medal, Ireland the silver and Scotland and Wales were awarded bronze medals. All the medals were subsequently credited to Great Britain.

The 1907–08 season was the 37th season of competitive football in England. Manchester United were Football League champions for the first time, while Bradford City won the Second Division and Wolverhampton Wanderers won the FA Cup. The Home Championship was shared between England and Scotland.

The association football tournament at the 1956 Summer Olympics was won by the Soviet Union.

The 1907–08 British Home Championship was an annual football competition played between the British Home Nations during the second half of the 1907–08 season. England and Scotland shared the trophy, having each beaten Wales and Ireland in their opening matches before drawing 1–1 with each other in the final game.

The 1930 season of the Mitropa Cup football club tournament was won by Rapid Vienna in a two-legged final against Sparta Prague. This was the fourth edition of the tournament.

The men's football tournament at the 2012 Summer Olympics was held in London and five other cities in Great Britain from 26 July to 11 August. Associations affiliated with FIFA were invited to enter their men's U-23 teams in regional qualifying competitions, from which 15 teams, plus the hosts Great Britain, reached the final tournament. Men's teams were allowed to augment their squads with three players over the age of 23. It was the first major FIFA-organised men's tournament to be held within the United Kingdom since the 1966 FIFA World Cup and was the first men's Olympic football tournament to feature a team representing Great Britain since the 1960 Summer Olympics in Rome.

The 2016 UEFA Women's Olympic Qualifying Tournament was an international football competition organised by UEFA to determine the final women's national team from Europe to qualify for the 2016 Summer Olympics women's football tournament in Brazil. The tournament was played between 2 and 9 March 2016 in the Netherlands.