Last updated September 26, 2022
Largest of several Masonic organizations in France and the oldest in Continental Europe

The Grand Orient de France (GODF) is the largest of several Masonic organizations in France and is the oldest in Continental Europe (as it was formed out of an older Grand Lodge of France in 1773, and briefly absorbed the rump of the older body in 1799, allowing it to date its foundation to 1728 or 1733). It is generally considered to be the mother lodge of traditional Liberal, or Continental Freemasonry.

In 1777, the Grand Orient de France recognised the antiquity of the Lodge of Perfect Equality, said to have been formed in 1688. This, if it actually existed at that time, was a military lodge attached to the Earl of Granard's Royal Irish Regiment, formed by Charles II of England in Saint-Germain in 1661, just before his return to England. The regiment remained loyal to the Stuarts, and did not return to France until after the fall of Limerick in 1689. They returned to barracks in Saint-Germain in 1698, surviving to become the 92nd Infantry Regiment after the revolution. With these dates in mind, modern scholars usually regard the 1688 lodge as a folk tale. [1]

An English Lodge is also said to have been founded at Dunkirk in 1721. Since that year, the French lodges were ruled by nobles belonging to the English Freemasonry nobles, who kept the contacts with the Royal House of the United Kingdom. [2] Another "first Lodge" was organised by exiled Jacobites under the Earl of Derwentwater in Paris about 1725. A lodge was documented at the Louis d'Argent in the Rue des Boucheries, Paris, in 1732. [3] These were English-speaking lodges that happened to be in France. There was also a French lodge listed in the 1723 minutes of the Premier Grand Lodge of England. Meeting at Solomon's Temple, in Hemmings Row (then off St. Martin's Lane in London) the Master was Jean Theophile Desaguliers, then Deputy Grand Master and effective governor of the craft in England. In a list of members, mostly having French names, James Anderson, who compiled the first printed constitutions, is listed as "Jaques Anderson maitre et arts". [4]

By the time of the French Revolution, there were some 1250 Masonic Lodges in the country. [9]

The Lodge Les Neuf Sœurs was a prominent lodge attached to the Grand Orient de France that was particularly influential in organising French support for the American Revolution (1765-1783) and later in the intellectual ferment that preceded the French Revolution (1789). Benjamin Franklin was a member of this Lodge when he was serving as liaison in Paris. [10]

Louis Philippe II, Duke of Orléans, a leader of the Liberal Aristocracy, was the Grand Master of the Grand Orient at the time of the French Revolution. [15] In some parts of France, the Jacobin Clubs were continuances of Masonic lodges from the Ancien Régime , and according to historian Alan Forrest "some early clubs, indeed, took over both the premises and much of the membership of masonic lodges, before rebadging themselves in the new idiom of the revolution." [17]

In France Napoleon III established a dictatorship over official French Freemasonry, appointing first Prince Lucien Murat and later Marshal Magnan to maintain close supervision over Freemasonry and suppress any hints of opposition to the regime. [22]

According to the Marxist author Ernest Belfort Bax, Freemasons had a considerable involvement in the Paris Commune after a couple of unsuccessful attempts at reconciling the Commune with the French Government. [23]

Schism with the United Grand Lodge of England

In 1877, at the instigation of the Protestant pastor Frédéric Desmons, [24] it allowed those who had no belief in a supreme being to be admitted. [25] The United Grand Lodge of England (UGLE) and related Lodges regarded belief in the Supreme Being as a Masonic Landmark.

It was this decision that has been the root cause of the schism between the Grand Orient (and those lodges that followed it), and the rest of Freemasonry. It is a schism in Freemasonry which continues to this day. It is argued that the definition is ambiguous, that Anderson's Landmarks are his own collection and interpretation of the historical landmarks, and that changes in both interpretation and practice have occurred before and since.

The decision was not universally approved in France. By 1894 many lodges had split off in protest and formed the Grande Loge de France (GLdF) [26] In 1910, a few members of the Grand Orient, wishing to re-introduce the concept of God the Great Architect, brought back the Rectified Scottish Rite from Switzerland. In the resulting friction with the national body, they amalgamated with the English lodge of Bordeaux to produce, in 1913, a third grand lodge, la Grande Loge Nationale Indépendante et Régulière pour la France et les Colonies françaises, now the Grande Loge Nationale Française. [27]

The Grand Orient was implicated in the Affaire des Fiches, where it was accused of collecting [32] and holding information on the religious and political affiliation of army officers, passed on by a member of the government, [33] having been collected with the intention of blocking practicing Catholics and non-Republicans from further advancement. [34]

Separation of Church and State

The Grand Orient advanced the concept of Laïcité, a French concept of the separation of church and state and the absence of religious interference in government affairs. [35] In the 1930s the Grand Orient was still hostile to Church interests, wishing to close private schools (which were predominantly Catholic), or failing that to reintroduce an insistence that only state schools could provide civil servants. [36]

During the first decade of the 21st century, the Grand Orient de France was concerned about a 'silent revolution' of a return of religion in society. [37] It advocated government action against (according to its own terms) an 'offensive of cults in Europe'. [38] In April 2008, when the legitimacy of the anti-cult ministerial group (MIVILUDES) was questioned, the Grand Master of the Order, Jean-Michel Quillardet, intervened personally with the Speaker of the French Parliament in order to maintain its activity. [39]

Relationship with other jurisdictions

The GODF practices Continental style Freemasonry (known to its practitioners as "Liberal Masonry" [40] ), the defining features of which are complete freedom of religious conscience and deliberate involvement in politics. This is antithetical to the "Anglo-American" tradition of Freemasonry, which remains male only and requires a belief in Deity but which otherwise bans discussion of both religion and politics. This difference affects which other Grand Jurisdictions give GODF "recognition" and deem it "regular". Those Grand Lodges and Grand Orients that follow the Continental tradition tend to recognize GODF, while those that follow the Anglo-American Tradition do not.

Unlike Anglo-American Freemasonry, the Grand Orient of France does not require candidates for membership to believe in a supreme being, and allows the discussion of political issues and religion in lodge. It upholds a series of guiding principles or ideals (valeurs), which individual members are expected to defend, and which the Grand Orient as a corporate body promotes. [41]

In discussions at all levels, up to and including the President, the Grand Orient claims to exert a beneficent influence on the French Government. [42]

When the Grand Orient took shape in 1773, it inherited several Lodges of Adoption attached to its own lodges. These were open to masons and admitted their female relatives in their own set of rituals. They received an implied seal of approval when the Duc de Chartres, then Grand Master of France, became "Grand Master" of a new lodge of adoption in Paris, with the Duchess of Bourbon as "Grand Mistress". Briefly eclipsed by the revolution, they again became fashionable under Napoleon, before being declared unconstitutional in 1808. [43] They were revived in 1901 as a women's society, before a final separation in 1935. The resulting organisation is now the Grande Loge féminine de France. [44]

For many years, the Grand Orient would not allow its lodges to initiate women, but did recognize and receive women who were made Freemasons in other jurisdictions. This changed in 2010, and after some setbacks, the Grand Orient currently allows the initiation of women. [45]

The Grand Orient stated its support for the legalization of same-sex marriage in a press release condemning the Roman Catholic Archbishop of Paris André Vingt-Trois for his public statements against same-sex marriage; in the statement, the GOdF described the bill as one which seeks to "ensure Republican recognition of free marital choice of individuals who wish it, in the name of equal rights". The statement continues with a call for churches to restrict their activities to the purely spiritual, and not interfere with the democratic process. [46]

The GODF currently has direct jurisdiction over the following individual lodges outside France:

*Foundation date as Triangle, it is not yet a lodge.

Freemasonry or Masonry refers to fraternal organisations that trace their origins to the local guilds of stonemasons that, from the end of the 13th century, regulated the qualifications of stonemasons and their interaction with authorities and clients. Modern Freemasonry broadly consists of two main recognition groups:

Co-Freemasonry is a form of Freemasonry which admits both men and women. It began in France in the 1890s with the forming of Le Droit Humain, and is now an international movement represented by several Co-Freemasonic administrations throughout the world. Most male-only Masonic Lodges do not recognise Co-Freemasonry, holding it to be irregular.

While many Christian denominations take no stance on, openly acknowledge, or allow Freemasonry, others discourage or prohibit their members from joining the fraternity.

The Grande Loge Nationale Française (GLNF) is a French Masonic Grand Lodge. It was founded in 1913, by two lodges, "Le Centre des Amis" Lodge splitting from Grand Orient de France and "L'Anglaise" lodge, an independent lodge based in Bordeaux. GLNF is based on monotheism and the 1929 precepts of regularity issued by the United Grand Lodge of England.

This is a general survey on the historical and modern presence of Freemasonry in countries located in Asia. 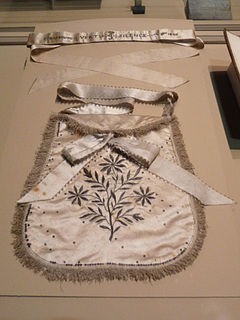 Freemasonry has had a complex relationship with women, which can be readily divided into many phases with no demonstrable relationship to each other until the 20th century. A few women were involved in Freemasonry before the 18th century; however the first printed constitutions of the Premier Grand Lodge of England appeared to bar them from the Craft forever.

The French Rite is a Rite of Freemasonry that was founded in France, in 1786.

Freemasonry in France has been influential on the worldwide Masonic movement due to its founding of Continental Freemasonry.

Continental Freemasonry in North America is relatively rare, but there are a few continental-style organizations active.

The history of Freemasonry in Belgium reflects the many influences on what is now Belgium from the neighbouring states.

The Women's Grand Lodge Of France is the Grand Lodge of France's women-only Masonic lodges.

Freemasonry in Spain is first recorded in 1728, in an English lodge. As various papal bulls condemned Freemasonry the Spanish Inquisition did their best to close lodges and demonise Freemasons, therefore the success of Freemasonry from year to year depended on the sympathy or antipathy of the ruling regime. Nevertheless, lodges and even Grand Lodges were formed, and even thrived during more liberal periods. When Francisco Franco consolidated power in 1939, all Freemasonry was banned. In 1979, four years after Franco's death, bans on Freemasonry were declared unconstitutional, and several Grand Lodges and Orients now flourish in Spain.

Freemasonry in Luxembourg traces its local origins to the 18th century. Though the practice of Freemasonry was suppressed by the reigning Austrian Habsburg dynasty, it enjoyed a revival under Napoleonic rule that persisted after the close of his reign. After their initial founding, Masonic lodges in Luxembourg rapidly developed strong ties with their French and Belgian counterparts. While suppressed again under Nazi rule, postwar Freemasonry forged stronger ties with the Anglo-American extension of the brotherhood, though the oldest lodges still use the French form of Masonic ritual.

Abbé Larudan was an anonymous 18th Century French writer—possibly a clergyman for the Catholic Church, though this is unconfirmed—who is largely known for his Anti-Masonic writing, The Freemasons Crushed.