Hexalectris (crested coralroot) [1] is a genus of the family Orchidaceae, comprising 10 known species of fully myco-heterotrophic orchids. [2] These species are found in North America, with the center of diversity in northern Mexico. [3] None of the species are particularly common. [4] Hexalectris spicata has a wide distribution and is likely the most abundant member of the genus, but is nevertheless infrequent throughout its range. [4] Other species are rare, and some, such as H. colemanii, are threatened or endangered. [5] All species that have been studied form associations with ectomycorrhizal fungi that are likely linked to surrounding trees. [6] Many Hexalectris species are found in association with oak trees (Quercus), which are ectomycorrhizal. [7]

Orchids are plants that belong to the family Orchidaceae, a diverse and widespread group of flowering plants with blooms that are often colourful and fragrant.

The Russulaceae are a diverse family of fungi in the order Russulales, with roughly 1,900 known species and a worldwide distribution. They comprise the brittlegills and the milk-caps, well-known mushroom-forming fungi that include some edible species. These gilled mushrooms are characterised by the brittle flesh of their fruitbodies. 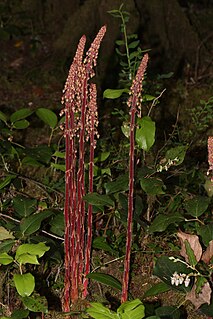 Pterospora, commonly known as pinedrops, woodland pinedrops, Albany beechdrops, or giant bird's nest is a North American genus in the subfamily Monotropoideae of the heath family, and includes only the species Pterospora andromedea. It grows as a mycoheterotroph in coniferous or mixed forests. It is widespread across much of Canada as well as the western and northeastern United States to and northern Mexico. Along with Monotropa it is one of the more frequently encountered genera of the Monotropoideae.

Galeola is a genus of orchids belonging to the subfamily Vanilloideae.

Corallorhiza, the coralroot, is a genus of flowering plants in the orchid family. Except for the circumboreal C. trifida, the genus is restricted to North America.

Corallorhiza trifida, commonly known as early coralroot, northern coralroot, or yellow coralroot, is a coralroot orchid native to North America and Eurasia, with a circumboreal distribution. The species has been reported from the United States, Canada, Russia, China, Japan, Korea, India, Nepal, Kashmir, Pakistan, and almost every country in Europe. 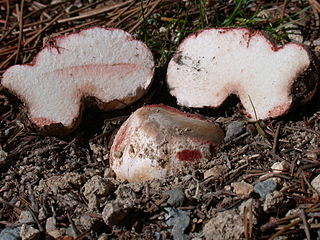 Rhizopogon is a genus of ectomycorrhizal basidiomycetes in the family Rhizopogonaceae. Species form hypogeous sporocarps commonly referred to as "false truffles". The general morphological characters of Rhizopogon sporocarps are a simplex or duplex peridium surrounding a loculate gleba that lacks a columnella. Basidiospores are produced upon basidia that are borne within the fungal hymenium that coats the interior surface of gleba locules. The peridium is often adorned with thick mycelial cords, also known as rhizomorphs, that attach the sporocarp to the surrounding substrate. The scientific name Rhizopogon is Greek for 'root' (Rhiz-) 'beard' (-pogon) and this name was given in reference to the rhizomorphs found on sporocarps of many species.

Limodorum is a genus of myco-heterotrophic orchids. All species are temperate terrestrial plants and occur across much of Europe, North-West Africa, the Mediterranean Islands, and as far east as Iran. Plants have evolved away from photosynthesis and as a result their leaves are reduced to scales. There is still chlorophyll present but the plants are believed to be solely dependent on their fungal partner for nutrients. They spend most of their life underground as a short stem with fleshy roots, the unbranched inflorescence can appear in April to June if conditions are favourable.

Hexalectris arizonica, the spiked crested coralroot or Arizona crested coralroot, is a terrestrial, myco-heterotrophic orchid lacking chlorophyll and subsisting entirely on nutrients obtained from mycorrhizal fungi in the soil. It is native to Arizona, New Mexico, Texas and Coahuila. It is closely related to H. spicata and sometimes regarded as a variety of that species.

Hexalectris spicata, the spiked crested coralroot, is a terrestrial, myco-heterotrophic orchid lacking chlorophyll and subsisting entirely on nutrients obtained from mycorrhizal fungi in the soil. It is native to Arizona, New Mexico, Texas and Coahuila. It is closely related to H. arizonica and the two are sometimes considered varieties of the same species. Hexalectris spicata is endemic to the southern half of the United States from Arizona east to Florida and north to Maryland and the Ohio Valley.

Hexalectris grandiflora, the largeflower crested coralroot or giant coral-root, is a species of orchid native to Mexico from Chihuahua south to Oaxaca, as well as to western and north-central Texas. It is a myco-heterotrophic species, lacking chlorophyll and subsisting entirely on nutrients obtained by fungi in the soil.

Hexalectris colemanii, or Coleman's crested coralroot, is a terrestrial, myco-heterotrophic orchid lacking chlorophyll and subsisting entirely on nutrients obtained from mycorrhizal fungi in the soil. It is a very rare species endemic to southern Arizona, known from only three counties. It is closely related to H. revoluta and the two are sometimes considered varieties of the same species.

Hexalectris revoluta, the Chisos Mountain crested coralroot, is a terrestrial, myco-heterotrophic orchid lacking chlorophyll and subsisting entirely on nutrients obtained from mycorrhizal fungi in the soil. It is closely related to H. colemanii; the two are regarded by some authors as varieties of the same species. Hexalectris revoluta is native to western Texas, southeastern New Mexico and Chihuahua.

Orchid mycorrhizae are endomycorrhizal fungi which develop symbiotic relationships with the roots and seeds of plants of the family Orchidaceae. Nearly all orchids are myco-heterotrophic at some point in their life cycle. Orchid mycorrhizae are critically important during orchid germination, as an orchid seed has virtually no energy reserve and obtains its carbon from the fungal symbiont.

Rhizopogon salebrosus is a mushroom species within the Rhizopogon sub-genus Amylopogon. R.salebrosus is a monotropoid mycorrhiza that is of vital importance to the ecology of conifer forests, especially in the Pacific Northwest region of North America. Although it is native to North America, R. salebrosus has been found in Europe and its range is generally limited to mountainous regions with sufficient precipitation. The mycoheterotrophic plant, Pterospora andromedea is often found in an obligate association with R. salebrosus in western parts of the U.S. Eastern populations of P. andromedea are typically symbiotic with another Rhizopogon sub species, R. kretzerae.