John Mathias Engler (born October 12, 1948) [1] is an American businessman and politician who served as the 46th Governor of Michigan from 1991 to 2003. A member of the Republican Party, he later worked for Business Roundtable, where The Hill called him one of the country's top lobbyists. [2]

Engler has spent most of his adult life in government. He was serving in the Michigan Senate when he enrolled at Thomas M. Cooley Law School and graduated with a Juris Doctor degree, having served as a Michigan State senator since 1979. He was elected Senate majority leader in 1984 and served there until being elected governor in 1990.

Engler served on the board of advisors of the Russell Kirk Center for Cultural Renewal, an educational organization that continues the intellectual legacy of noted conservative and Michigan native Russell Kirk. Engler also served on the board of trustees of the Marguerite Eyer Wilbur Foundation, which funds many Kirk Center programs. Engler was a member of the Annie E. Casey Foundation board of trustees until 2014. As of 2018, he serves on the board of directors of Universal Forest Products. Previous board service included serving as a director of Dow Jones and Delta Air Lines and as a trustee of Munder Funds. [3] [4]

Engler, a Roman Catholic, [5] was born in Mount Pleasant, Michigan, on October 12, 1948, to Mathias John Engler and his wife, Agnes Marie (née Neyer), but grew up on a cattle farm near Beal City.

He was elected to the Michigan House of Representatives as a state representative in 1970 at the age of 22. He served in the House from 1971 to 1978. His campaign manager in that first election was a college friend, Dick Posthumus. Engler later became the first Republican youth vice-chair for the Michigan Republican Party, defeating future U.S. Senator Spencer Abraham. Posthumus later went on to be elected a state senator, Senate Majority Leader and Lieutenant Governor. He was Engler's running mate in the 1998 election and served from 1999 to 2003.[ citation needed ]

In 2002, near the end of his final term, Engler and the Michigan Department of Environmental Quality attempted to negotiate a consent order with Dow Chemical that would have resulted in a ninefold increase in the allowable levels of dioxins. The consent order would have resulted in Dow not having to pay to clean up high levels of toxins in Midland, Michigan, near its plant there, as well as in the Tittabawassee flood plain, which had been contaminated by dioxins dumped into the river from the facility and from overflow from waste ponds. [8] [9] The consent order fell through in late 2002. [8]

During the 1996 presidential election, Engler was considered by many[ who? ] political commentators and experts to be a serious potential vice presidential running mate for Republican nominee Bob Dole. However, Dole instead selected Jack Kemp, a former congressman and HUD secretary.

Engler endorsed Texas Governor George W. Bush in the 2000 Republican primary. After Bush secured the GOP nomination, Engler's name began to surface as a possible running mate for Bush. [10] In his book Decision Points , Bush says that Engler was someone he was "close" with and could "work well with." Ultimately, Engler was passed over for the running mate position in favor of Dick Cheney. After the election, Engler's close political ally Spencer Abraham, who narrowly lost his re-election bid for the Senate to Debbie Stabenow, was chosen as Bush's Secretary of Energy.

In 1990, Engler, then the state senate majority leader, challenged Governor James Blanchard in his bid for a third term. Political observers viewed his bid as a long shot, and he trailed Blanchard by double digits in the polls the weekend before the election. However, on election day, Engler pulled off the upset, defeating Blanchard by approximately 17,000 votes—a margin of less than one percentage point. [11] [12] In 1994, Engler ran for his second term. The Democrats nominated former Representative Howard Wolpe, who had close ties to the labor movement—a potent force in Democratic politics in Michigan. Engler bested Wolpe 61 to 39 percent, and the state Republican Party made significant gains. Spencer Abraham picked up the Senate seat of retiring Democrat Donald Riegle. Republicans gained a seat to break a tie in the state House of Representatives, taking a 56–54 majority, while also picking up a seat in the U.S. House of Representatives. Republican Candice Miller won an upset victory to win the post of Secretary of State.[ citation needed ]

Michigan voters re-elected Engler to his third and final term in 1998. He won a landslide victory over lawyer Geoffrey Fieger. Engler took 1,883,005 votes—62 percent of the total—to Fieger's 38 percent and 1,143,574 votes. Engler's landslide helped the state Republican Party to gain six seats in the state House of Representatives, taking control of the chamber they had lost two years previously with a 58–52 margin, as well as picking up an additional seat in the State Senate, for a 23–15 majority. Republicans also gained a seat on the technically non-partisan state Supreme Court, holding a 4–3 majority over the Democrats.

In 2017, Engler was appointed to a four-year term on the governing board of the National Assessment of Educational Progress project. [16]

On January 30, 2018, Engler was named the interim president of Michigan State University to replace Lou Anna Simon, who was embroiled with the school in the USA Gymnastics sex abuse scandal involving Larry Nassar. [17] [18] The appointment of Engler sparked controversy due to his previous handling of sexual misconduct as governor of Michigan. Engler's tenure as interim president was plagued by controversies, brought on by Engler's apparent callous statements and actions toward survivors during Board of Trustees meetings and statements that were reported by the press. One on Nassar's victims, Rachael Denhollander, said Engler "chose to stand against every child and every sexual assault victim in the entire state, to protect an institution." Engler resigned on January 16, 2019 after the Board of Trustees indicated its intent to ask him to resign following a series of embarrassing incidents regarding Nassar's victims and his responses to issues in the aftermath. [19] Engler initially indicated he planned to resign on January 23, 2019 [20] but the Board required him to resign the morning after he submitted his resignation letter. [21]

In 1974, Engler married Colleen House Engler, who served in the Michigan House of Representatives and ran for lieutenant governor of Michigan in 1986. She filed for divorce in 1986. [22]

James Johnston Blanchard is an American politician, attorney, and former diplomat from Michigan. A Democrat, Blanchard has served in the United States House of Representatives, as the 45th Governor of Michigan, and as United States Ambassador to Canada. 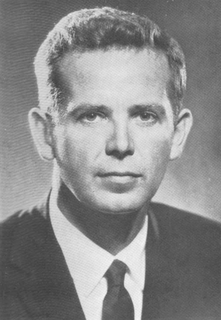 William Grawn Milliken was an American businessman and politician who served as the 44th governor of Michigan. A member of the Republican Party, he is the longest-serving governor in Michigan history, serving more than three full four-year terms from 1969 to 1983. During this period he dealt with dramatic changes to the state economy, due to industrial restructuring and challenges to the auto industry, resulting in loss of jobs and population from Detroit, the state's largest city. He also oversaw the PBB crisis and adopted a policy of environmental protection and conservation. 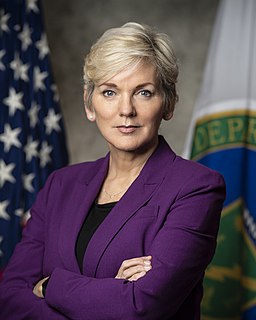 Jennifer Mulhern Granholm is a Canadian-American politician, lawyer, educator, author, and political commentator serving as the 16th United States Secretary of Energy. A member of the Democratic Party, she was the 47th governor of Michigan from 2003 to 2011. She was the first woman to serve as Michigan's governor, and she earlier served as attorney general of Michigan.

John J. H. "Joe" Schwarz, is an American physician and independent politician from Michigan, who was elected to the United States House of Representatives in 2004 as a moderate Republican. He represented Michigan's 7th congressional district from January 2005 to January 2007.

Lou Anna Kimsey Simon is an American academic administrator who served as the 20th president of Michigan State University (MSU). Simon was appointed interim president of the university in 2003, then served as president from 2005 until her resignation in 2018. 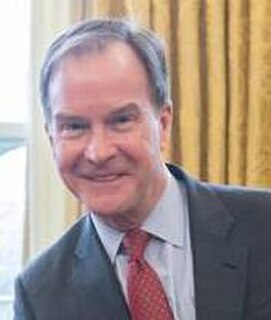 William Duncan Schuette is an American lawyer and politician who served as the 53rd attorney general of Michigan from 2011 to 2019. He was the unsuccessful Republican nominee for Governor of Michigan in the 2018 gubernatorial election.

Frank Joseph Kelley was an American politician who served as the 50th Attorney General of the U.S. state of Michigan. His 37-year term of office, from 1961 to 1999, made him both the youngest and oldest Attorney General in the state's history, and led to his nickname as the "Eternal General". He won ten consecutive terms of office. He was the longest serving state attorney general in United States history, until Tom Miller of Iowa surpassed his longevity record in 2019—although Kelley still holds the record for longest continuous tenure as an attorney general. In 37 years of service as Michigan’s chief law enforcement officer, he worked in concert with five Michigan governors.

The 2002 Michigan gubernatorial election was one of the 36 United States gubernatorial elections held on November 5, 2002. Incumbent Republican Governor John Engler, after serving three terms, was term-limited and was ineligible to run for a fourth term; his lieutenant governor Dick Posthumus, also a Republican, ran in his place. Jennifer Granholm, then Attorney General of Michigan, ran on the Democratic Party ticket. Douglas Campbell ran on the Green Party ticket, and Joseph M. Pilchak ran on the Constitution Party ticket.

The 1990 Michigan gubernatorial election was held on November 6, 1990, to elect the Governor and Lieutenant Governor of the state of Michigan. John Engler, a member of the Republican Party and State Senate majority leader, was elected over Democratic Party nominee James Blanchard, who was seeking his third term.

The 1998 Michigan gubernatorial election was held on November 3, 1998, to elect the Governor and Lieutenant Governor of the state of Michigan. Incumbent Governor John Engler, a member of the Republican Party, was re-elected over Democratic Party nominee Geoffrey Fieger, a lawyer who had represented the assisted suicide advocate Jack Kevorkian. As of 2021, this is the last time Gogebic County, Genesee County, and Washtenaw County voted for the Republican gubernatorial candidate. 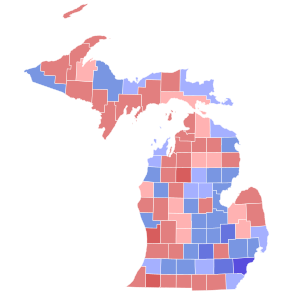 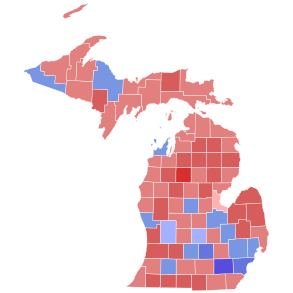 The 2018 United States Senate election in Michigan took place on November 6, 2018, in order to elect the Class 1 U.S. Senator from the State of Michigan, concurrently with a gubernatorial election, as well as other elections to the U.S. House of Representatives. 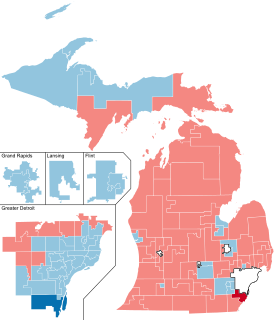 Events from the year 2018 in Michigan.

Events from the year 1990 in Michigan.