Thomas Reeve "Tom" Pickering (born November 5,1931) is a retired United States ambassador. Among his many diplomatic appointments,he served as U.S. Ambassador to the United Nations from 1989 to 1992.

Born in Orange,New Jersey,Pickering is the son of Hamilton Reeve Pickering and Sarah Chasteney Pickering. He graduated from Rutherford High School in Rutherford,New Jersey. [1]

He enrolled at Bowdoin College in Brunswick,Maine in 1949 with plans to join the ministry [2] and graduated cum laude in 1953 with high honors in history and is a member of Theta Delta Chi and Phi Beta Kappa. He then earned a master's degree from the Fletcher School of Law and Diplomacy at Tufts University in Medford,Massachusetts. Upon graduation from Tufts,he was awarded a Fulbright Fellowship and attended the University of Melbourne in Australia where he received a second master's degree in 1956. In addition to the honorary doctorate-in-laws degree that Bowdoin awarded him in 1984,Pickering has been the recipient of 12 honorary degrees. [3]

Before joining the State Department,Pickering served on active duty in the United States Navy from 1956 to 1959, [4] and later served in the Naval Reserve where he reached the rank of Lieutenant Commander. [5]

Early in his career,he was assigned to the U.S. embassy in Tanzania and later was Special Assistant to Secretaries of State William P. Rogers and Henry Kissinger. When Pickering served as United States Ambassador to Jordan in the mid-1970s,King Hussein declared him "the best American ambassador I've dealt with." [7] From 1978 to 1981,he served as Assistant Secretary of State for Oceans and International Environmental and Scientific Affairs. He then spent time as the United States Ambassador to Nigeria before President Ronald Reagan surprisingly replaced the Ambassador to El Salvador,Deane R. Hinton,and put Pickering in his place. [8]

Pickering's time as United States Ambassador to El Salvador was particularly eventful. Only a year after having been appointed ambassador in 1984,Pickering was the subject of assassination threats from right-wing Salvadoran politicians. [7] The same year,Republican Senator Jesse Helms of North Carolina urged that Pickering be dismissed,arguing that he helped manipulate the country's elections. [9] In both cases,President Ronald Reagan offered Pickering his full support and he secured him a job as United States Ambassador to Israel after his appointment in El Salvador. It was later noted when Pickering was nominated as U.S. Ambassador to the United Nations that he played a minor role in the Iran–Contra affair while Ambassador to El Salvador. [10]

As Ambassador to Israel,Pickering led the United States' criticism of an Israeli policy that expelled Palestinians accused of instilling uprising. [11] Pickering stressed to Israeli Prime Minister Yitzhak Shamir that the United States considered the actions illegal and unhelpful for peace efforts. [12]

Following the resignation of Secretary of State Warren Christopher in 1996,Pickering was reportedly a top contender for the post,but was ultimately passed over in favor of then-UN Ambassador Madeleine Albright. [17]

From 1997 to 2001,Pickering served as Under Secretary of State for Political Affairs,the number-three position at the State Department. When Albright appointed him to the post,Time magazine declared him the "five star general of the diplomatic corps". [18] In 1998,he was a special envoy to Nigeria and was meeting with imprisoned leader M. K. O. Abiola on the day of his release. In a BBC interview made at the time,Pickering recounted how during the meeting Abiola became ill,and died soon after. [19]

After the State Department

Following his retirement from the Foreign Service in 2001,Pickering served as Senior Vice President for International Relations at Boeing until 2006. Currently[ when? ],he is serving as an independent board member at the world's biggest pipe company,OAO TMK,in Moscow. At present[ when? ],he is affiliated with the International Crisis Group and currently serves as its Co-Chair, [20] and oversees their international actions as a co-chair. In addition,he is Chairman of the Center for the Study of the Presidency and Congress,Chairman of the Board of Advisers of the Institute for the Study of Diplomacy, [21] Chairman of the American Academy of Diplomacy,Chairman of the Rostropovich-Vishnevskaya Foundation, [22] and a member of the Board of Advisors of the National Bureau of Asian Research and the Global Panel Foundation based in Berlin,Prague and Sydney. [23]

Following his retirement,the U.S. Department of State Foreign Affairs Fellowship Program was renamed the Thomas R. Pickering Foreign Affairs Fellowship Program to honor Pickering. Fellowships are funded by the U.S. Department of State and administered by The Washington Center for Internships and Academic Seminars. [24] In May 2004,Bowdoin awarded Pickering the Bowdoin Prize,the highest award that the College bestows upon its graduates. [25]

Pickering serves on the board of directors for CRDF Global and the American Iranian Council,an organization devoted to the normalization of relations between Iran and America. [26] He is currently a member of the Constitution Project's bipartisan Liberty and Security Committee. [27] He is also a member of the Council on Foreign Relations and the Henry L. Stimson Center board of directors as well as the Advisory Board of Eurasia Group,the political risk consultancy firm,and America Abroad Media. [28] He serves on the Guiding Coalition of the nonpartisan Project on National Security Reform. Pickering also serves as an Advisory Board member for the Partnership for a Secure America.

Pickering also serves as Co-Chairman of the International Economic Alliance (IEA), [29] where he actively hosts and partakes in international forums attended by notable corporate leaders,ambassadors,and senior government officials from member nations of the Alliance.

Pickering is a member of the Global Leadership Foundation,an organization that works to support democratic leadership,prevent and resolve conflict through mediation,and promote good governance. He is also a board member of the National Iranian American Council (NIAC). [30]

In 2012,along with former Chairman of the Joint Chiefs of Staff Admiral Michael Mullen,Pickering helped lead a State-Department-sponsored panel investigating the Attack on the U.S. diplomatic mission in Benghazi. [31]

In 2014,Pickering gave the keynote speech at the Student Conference on U.S. Affairs at West Point,New York,addressing the unique challenges that disaster preparedness poses to United States foreign policy planning. [32]

Pickering lives in Fairfax County,Virginia. His wife,the former Alice Jean Stover,whom he married in 1955,died in 2011. The couple had two children,Timothy and Margaret. [33]

In 2002,Pickering was presented the Lifetime Contributions to American Diplomacy Award by the American Foreign Service Association.

In May 2015,Pickering received an honorary Doctor of Laws degree from Brandeis University. He addressed the graduates as the commencement speaker.[ citation needed ]

Richard Charles Albert Holbrooke was an American diplomat and author. He was the only person to have held the position of Assistant Secretary of State for two different regions of the world.

John Dimitri Negroponte is an American diplomat. He is currently a James R. Schlesinger Distinguished Professor at the Miller Center for Public Affairs at the University of Virginia. He is a former J.B. and Maurice C. Shapiro Professor of International Affairs at the George Washington University's Elliott School of International Affairs. Prior to this appointment,he served as a research fellow and lecturer in international affairs at Yale University's Jackson Institute for Global Affairs,United States Deputy Secretary of State (2007–2009),and the first ever Director of National Intelligence (2005–2007). 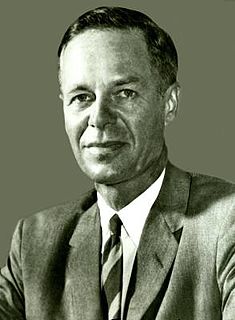 Charles Woodruff Yost was a career U.S. Ambassador who was assigned as his country's representative to the United Nations from 1969 to 1971.

Edward Peter Djerejian is a former United States diplomat who served in eight administrations from John F. Kennedy to Bill Clinton (1962–94.) He served as the United States Ambassador to Syria (1988–91) and Israel (1993–94),Special Assistant to President Ronald Reagan and Deputy Press Secretary of Foreign Affairs (1985–1986),and was Assistant Secretary of State for Near Eastern Affairs (1991–1993.) He was the founding director of Rice University's Baker Institute for Public Policy (1994-2022) He is a senior fellow at the Middle East Initiative at Harvard Kennedy School's Belfer Center for Science and International Affairs,a fellow of the American Academy of Arts and Sciences and is on the board of trustees of the Carnegie Corporation of New York. Djerejian was elected chairman of Occidental Petroleum Corporation’s board of directors (2013–2015). Djerejian is the author of the book Danger and Opportunity:An American Ambassador's Journey Through the Middle East

Edward Joseph Perkins was an American career diplomat who served as U.S. Ambassador to Liberia,South Africa,the United Nations,and Australia. He also served as the director of the United States State Department's Diplomatic Corps.

Robert Nicholas Burns is an American diplomat and academic who is the 13th and current United States Ambassador to China since 2022. Burns is a professor of diplomacy and international politics at the John F. Kennedy School of Government at Harvard University and a member of the Board of Directors of the school's Belfer Center for Science and International Affairs. He is director of the Aspen Strategy Group,senior counselor at The Cohen Group,and serves on the board of directors of Entegris,Inc.

Frank Almaguer is an American retired diplomat and career Foreign Service Officer. He has served in numerous positions with the Peace Corps,the United States Agency for International Development,the U.S. Department of State and the Organization of American States. 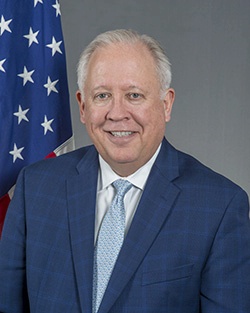 The American Academy of Diplomacy is a private,nonprofit,non-partisan,elected organization whose active membership is limited to men and women who have held positions of high responsibility in crafting and implementing American foreign policy. They have served the United States as chiefs of mission in major embassies abroad,and/or equivalent high-level foreign policy positions in Washington. 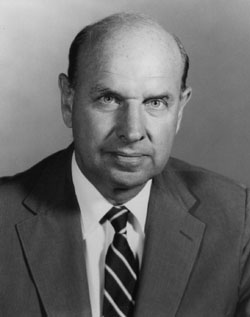 The Thomas R. Pickering Foreign Affairs Fellowship Program is a graduate school fellowship program that provides funding for graduate students as they prepare academically and professionally to enter the U.S. Foreign Service. 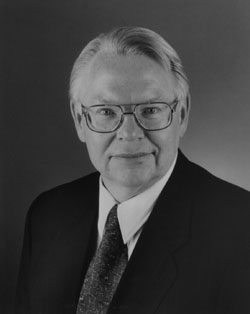 James Franklin Collins is a former United States Ambassador to Russia. A career Foreign Service Officer in the State Department,he is a Russian specialist.

Thomas David Boyatt is a former diplomat and United States Ambassador to Burkina Faso (1978–80) and Colombia (1980–83). He is a member of the American Academy of Diplomacy. He was held captive for six days in a Palestinian hijacking in the 1960s. He graduated from Wyoming High School in 1951. He continues to return to his former high school to speak to students during the Wyoming School Foundation Day.

Roman Popadiuk is an American diplomat of Ukrainian descent. Popadiuk served as the first United States Ambassador to Ukraine under George H.W. Bush,from 1992 to 1993. From 2015 until 2017 he was a principal at Morgan,Lewis &Bockius LLP's subsidiary Morgan Lewis Consulting,and prior to 2015 he was the principal at Bingham Consulting. Since late 2018 Popadiuk has been the president of the Diplomacy Center Foundation which oversees the development of the National Museum of American Diplomacy. 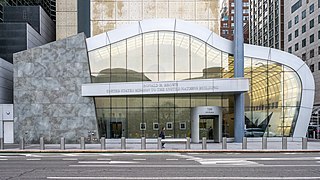 African-Americans in foreign policy in the United States catalogs distinguished African Americans who have and continue to contribute to international development,diplomacy,and defense through their work with the U.S. Department of State,the U.S. Agency for International Development,the U.S. Information Agency,and the U.S. Congress,and other notable agencies and non-governmental organizations. The creators acknowledge the presence of the interagency contributions to the foreign affairs realm,and welcome additional content to showcase the achievements of African-Americans in other relevant USG agencies. 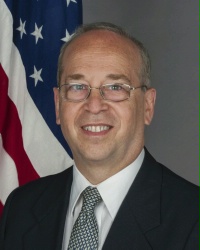 Daniel R. Russel is an American diplomat who served as the Assistant Secretary of State for East Asian and Pacific Affairs from 2013 to 2017. Prior to his appointment as Assistant Secretary,Russel was Special Assistant to the President and National Security Staff Senior Director for Asian Affairs. While working at the White House,he was a major figure in the Obama administration's "pivot towards Asia" strategy.

Linda Thomas-Greenfield is an American diplomat who is the United States ambassador to the United Nations under President Joe Biden. She served as the U.S. assistant secretary of state for African affairs from 2013 to 2017. Thomas-Greenfield then worked in the private sector as a senior vice president at Albright Stonebridge Group in Washington,D.C.

Eric Seth Rubin is an American diplomat who served as United States Ambassador to Bulgaria from 2016 to 2019.

Wikimedia Commons has media related to Thomas R. Pickering .
This page is based on this Wikipedia article
Text is available under the CC BY-SA 4.0 license; additional terms may apply.
Images, videos and audio are available under their respective licenses.