Wildlife features include large animal herds, particularly of Cape Buffaloes, zebras, giraffes, and elephants, plus along the Katuma river, crocodiles and hippopotami which upon annual dry seasons results in mudholes that can be packed with hundreds of hippos. [3] Carnivorous animals that roam this park are cheetahs, wild dogs, hyenas, leopards, and lions. Some sources claim a very high biodiversity in the park, although there are also reports of wildlife decline due to illegal hunting and poaching, presumably 'bushmeat' sustenance. [4] Katavi has fewer human visitors and jeeps conducting game drives than other Tanzania parks.[ citation needed ]

The number of visitors to the park on an annual basis is extremely low, in comparison to better known parks, just above 1,500 foreign visitors out of a total 900,000 registered in the whole Tanzania National Parks system during 2012/13. [5] A survey of the actual rooms sold by the available 'Safari' style accommodations might reveal the number, but based on total room count and season length, an upper limit can also be estimated. In addition to a public campsite (located at SO 06'39'19.1 E0 031'08'07.9), [6] as of 2013, there were only three permanent camps permitted to operate at Katavi, namely the Mbali Mbali Katavi Lodge [7] and the Foxes [8] on the Katuma Plain and the Chada [9] on the Chada Plain. These camps each have a visitor capacity limit of approximately one dozen each.

Getting to Katavi for visitors will likely be arranged by the hosting camp, with one of the available charter flight services being the Mbali Mbali Shared Charter (operated by Zantas Air Services) [10] or Safari Air Link. [11] All flights will require landing on a dirt airstrip; the Ikuu airstrip (near the Ikuu Rangerpost) has minimal services. [12] It is very approximately a three-hour flight from Katavi to Dar es Salaam and two-hours flight to Mwanza via a small, bush-compatible light aircraft. A flight to Arusha is similarly ~3 hours distant and operates on limited service usually only twice a week on Mondays and Thursdays.

Access to Katavi via ground transportation: estimates vary widely; it is generally discussed not in hours but in days. The town of Mbeya is (550 km/340 miles) distant and is described as a "...tough but spectacular..." drive; [13] Google Maps indicates that Mbeya is 838 km from Dar es Salaam, making the total distance approximately 1,400 km (870 mi) and requiring 20+ hours. The most direct route to Dar es Salaam as per Google Maps [14] is approx. 1250 km (~800 miles) and requiring 16+ hours. Arusha is similarly distant: 1000+km /13.5 hours. The percentage of transit on unpaved surfaces is unknown, but parts of all of these routes will definitely be on dirt roads. Since all of the above times from Google Maps assume an average transit speed of 80 km (50 mph), all these indicated travel times should be considered to be optimistic.

Precision Air Services Plc is a Tanzanian airline based at Julius Nyerere International Airport in Dar es Salaam. The airline operates scheduled passenger services to Nairobi, Entebbe, and to both airports and more basic airstrips throughout Tanzania. 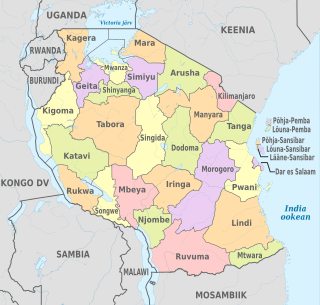 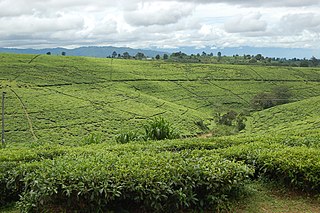 Mbeya Region is one of Tanzania's 31 administrative regions. It is located in the country's southwest. The regional capital is the city of Mbeya. According to the 2012 national census, the region had a population of 2,707,410, which was lower than the pre-census projection of 2,822,396. For 2002-2012, the region's 2.7 percent average annual population growth rate was tied for the tenth highest in the country. It was also tied for the eighteenth most densely populated region with 45 people per square kilometre. In 2016, the town of Tunduma and the districts of Ileje, Mbozi, Momba and Songwe were split from Mbeya Region to create Songwe Region. Mbeya Region is now bordered to the northwest by Tabora Region, to the northeast by Singida Region, to the east by Iringa Region, to the south by Songwe Region and Malawi, and to the west by Songwe Region. Prior to the creation of Songwe Region, Mbeya Region covered an area of 62,420 square kilometres (24,100 sq mi). It now covers an area of 35,954 square kilometres (13,882 sq mi).

Coastal Aviation is an airline that operates out of Julius Nyerere International Airport, Terminal 1, in Dar es Salaam, Tanzania. It services many areas in Tanzania, but also operates regionally to neighboring countries, including Kenya and Rwanda. 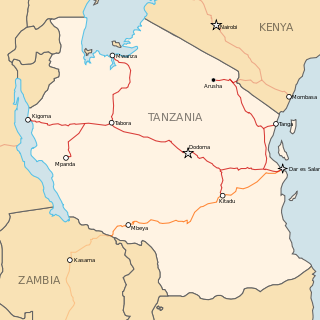 Railway stations in Tanzania include: 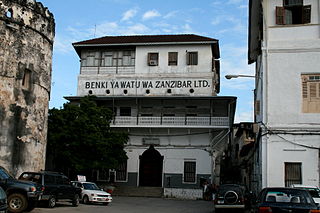 The People's Bank of Zanzibar (PBZ) is a commercial bank in Tanzania. It is licensed by the Bank of Tanzania, the central bank and national banking regulator.

NCBA Bank Tanzania Limited, is a merged bank between Commercial Bank of Africa (Tanzania) and NIC Bank Tanzania. It is a commercial bank in Tanzania licensed by the Bank of Tanzania, the central bank and national banking regulator. 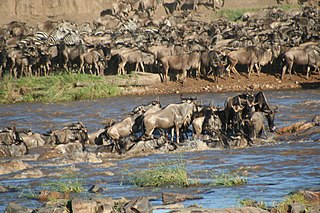 First National Bank Tanzania (FNBT), is a commercial bank in Tanzania. It is one of the commercial banks licensed by the Bank of Tanzania, the national banking regulator. It is a subsidiary of South Africa-based FirstRand Group. 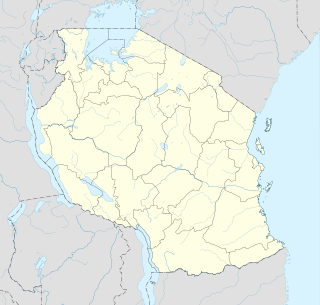 Mpanda is a city in Katavi Region of Tanzania, East Africa with a postcode number 50100. It is the administrative centre of Katavi Region, Mpanda District and is itself one of the four districts of the region.

The Tanzania National Parks Authority commonly known as TANAPA is responsible for the management of Tanzania's national parks. TANAPA is a parastatal corporation and all its income is reinvested into the organization. It is governed by a number of instruments including the National Parks Act, Chapter 282 of the 2002 and the Wildlife Conservation Act No. 5 of 2009. TANAPA manages the nation's 22 National parks which covers approximately 15% of the land area and has the mandate to conserve and manage the wildlife in Tanzania, and to enforce the related laws and regulations in this industry. It manages the biodiversity of the country, protecting and conserving the flora and fauna. The organization does not have a mandate over the game reserves such as the Selous Game Reserve which is managed by the Tanzanian Wildlife Division and the Ngorongoro Conservation Area managed by the Ngorongoro Conservation Authority.

Tanzania Breweries Limited, also referred to as TBL, is the oldest and largest brewing company in Tanzania.

The Tanzanian First Division League is the second tier of league football in Tanzania. The league is divided into three groups, each consisting of eight teams.

The Tanzam Highway leads from Lusaka in Zambia to Dar es Salaam in Tanzania. The highway was built from 1968 to 1973 in several stages and was intended to provide seaport access for Zambia and to expand the transport options for Zambia, Malawi and the then Zaire. 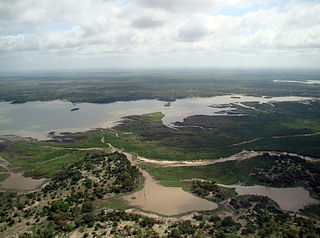 Nyerere National Park is the largest national park in Tanzania and also one of the world's largest wildlife sanctuaries and national parks. The total area of the park is 30,893 km2 (11,928 sq mi) and covers the big part of Liwale District in western Lindi Region, south west Pwani Region, north eastern Ruvuma Region and a big part of south eastern Morogoro Region. The area is larger than 70 countries in the world and is estimated to be twice the size of Costa Rica and about twice the size of Belgium (Europe). Much of the area is in a wild state without being altered by human activities. The part of selous game reserve is now running a hydro electric power. The park has great river known as Rufiji river. Rufiji is Tanzania's largest river and is home animals such as Crocodile and hippopotamus also one of largest magrove forests in the world located at its delta.