Kosciuszko's Garden is a small retreat garden built by Tadeusz Kosciuszko on the side of a cliff overlooking the Hudson River at West Point, New York. [1] First constructed in 1778, it still offers visitors and cadets a place of quiet tranquility during the warmer months. [2] The "General Edward L. Rowny Family Endowment" was established to further sustain perpetual care and maintenance of the Garden and to dedicate a plaque commemorating the occasion. 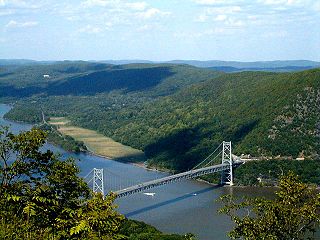 The United States Military Academy (USMA), also known as West Point, Army, Army West Point, The Academy, or simply The Point, is a four-year federal service academy in West Point, New York. It was originally established as a fort that sits on strategic high ground overlooking the Hudson River with a scenic view, 50 miles (80 km) north of New York City. It is one of the five U.S. service academies.

Dr. James Thacher described it in his diary, "Colonel Thaddeus Kosciuszko, a gentleman of distinction from Poland...amused himself while stationed on the point, in laying out a curious garden in a deep valley, abounding more in rocks than soil. I was gratified in viewing his curious water fountain with jets and cascades." [3] :71

James Thacher was an American physician and writer, born in Barnstable, Mass.

Fort Clinton was the main defensive garrison of the Revolutionary War defense network at West Point. Commanded by and named after Benedict Arnold before his betrayal of the Revolutionary Army and defection to the British, it was later renamed after General James Clinton. Construction was begun under Captain Louis de la Radiere, and completed under the command of Tadeusz Kosciuszko between 1778–1780; it was the key defensive fort, overlooking the turn in the Hudson River and the Great Chain. After the war, the remains of Fort Clinton fell into disrepair and were eventually demolished to make way for the expansion of the United States Military Academy, founded at the garrison in 1802. Today, all that remains of the fort are some earthworks and stone base structures, easily seen off of Thayer Road as it rounds the plain and the soccer fields at West Point. 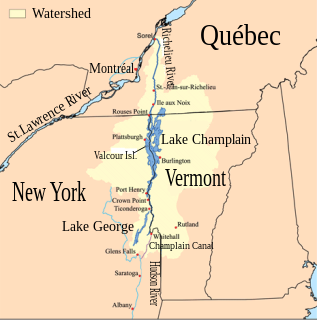 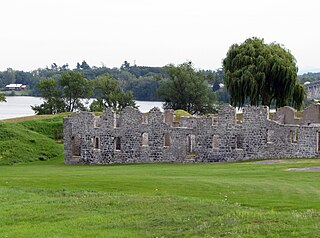 Crown Point is a town in Essex County, New York, United States, located on the west shore of Lake Champlain. The population was 2,024 at the 2010 census. The name of the town is a direct translation of the original French name, "Pointe à la Chevelure". 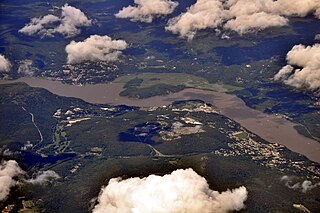 Andrzej Tadeusz Bonawentura Kościuszko was a Polish-Lithuanian military engineer, statesman, and military leader who became a national hero in Poland, Lithuania, Belarus, and the United States. He fought in the Polish–Lithuanian Commonwealth's struggles against Russia and Prussia, and on the U.S. side in the American Revolutionary War. As Supreme Commander of the Polish National Armed Forces, he led the 1794 Kościuszko Uprising.

Castle Clinton or Fort Clinton, previously known as Castle Garden, is a circular sandstone fort now located in Battery Park, in Manhattan, New York City. Built from 1808 to 1811, it was the first U.S. immigration station, where more than 8 million people arrived in the United States from 1855 to 1890. Over its active life, it has also functioned as a beer garden, exhibition hall, theater, and public aquarium. Castle Clinton National Monument was listed on the National Register of Historic Places on October 15, 1966.

Hudson Heights is a residential neighborhood of the Washington Heights area of Upper Manhattan, New York City. Most of the residences are in apartment buildings, many of which are cooperatives, and most were constructed in the 1920s through 1940s. The Art Deco style is prominent, along with Tudor Revival. Notable complexes include Hudson View Gardens and Castle Village, which were both developed by Dr. Charles V. Paterno, and were designed by George F. Pelham and his son, George F. Pelham, Jr., respectively. 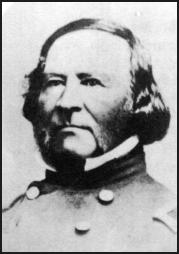 René Edward De Russy was an engineer, military educator, and career United States Army officer who was responsible for constructing many Eastern United States coastal fortifications, as well as some forts on the West Coast. He also served as superintendent of the United States Military Academy. He was promoted to brigadier general during the American Civil War.

Humboldt Park is a 207-acre (84 ha) park located at 1400 North Sacramento Avenue on the West Side of Chicago, Illinois.

Kościuszko's Monument is a pedestal and statue of Polish-Lithuanian General Tadeusz Kościuszko at the United States Military Academy at West Point, New York. Kościuszko designed the defenses of the West Point garrison from 1778–1780 during the height of the Revolutionary War, when George Washington considered West Point to be the most important military post in America. The pedestal and shaft of the monument was first proposed in 1825 by John Latrobe, and dedicated in 1828. The statue, designed by D. Borja, was later added in 1913. 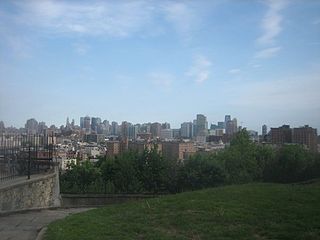 Palisade Avenue is the name given to a historic road which parallels the eastern crest of Hudson Palisades in northeastern New Jersey. It travels between Jersey City and Fort Lee, passing through Jersey City Heights, North Hudson, and Cliffside Park, with various parts carrying Hudson and Bergen county route designations. The avenue re-aligns itself at several places along its route as it crosses traditional municipal boundaries created in the 19th century. As a primary route running along the top of the Hudson Palisades, many segments offer scenic views of the Hudson River and the New York skyline.

Tadeusz Kościuszko is one of the most honored persons in Polish history, in terms of places and events named in his honor.