The Thayer Hotel is a 151-room "Historic Hotel of America" property located 50 miles north of New York City on the banks of the Hudson River at 674 Thayer Road in West Point, New York on the campus of the United States Military Academy. It is named after Sylvanus Thayer, West Point class of 1808, the "father of the Military Academy." It replaced the West Point Hotel in 1926.

The Thayer Hotel has three main markets: tourists visiting West Point, weddings, and corporate conferences. The Thayer Hotel came under new management in October 2009. The 151-room hotel has been completely renovated, re-branded, and is now being marketed to host corporate events and leadership training. Renovations completed at The Thayer Hotel in 2012, have brought about the opening of its new executive suite wing, which includes 23 suite-style rooms.

In 1829, the West Point Hotel was built near the Plain on Trophy Point. The West Point Hotel served the academy for over a century, hosting a long list of dignitaries such as Robert E. Lee, Ulysses S. Grant, Stonewall Jackson, Winfield Scott, William Tecumseh Sherman, Washington Irving, Edgar Allan Poe, and James Whistler. [1] Perhaps that hotel's history is tied most famously to one of West Point's most famous graduates, General Douglas MacArthur. During General Douglas MacArthur's time as a cadet, his mother lived in the West Point Hotel. When Brigadier General Douglas MacArthur returned from World War I to become the Superintendent of West Point, he started a major expansion program of the buildings. The new Thayer Hotel was one of these expansion projects and the Thayer Hotel officially opened May 27, 1926 with 225 rooms. General MacArthur would return to West Point and stay in the hotel in 1962 for one final time to give his noted "Duty, Honor, Country" speech to the cadets as he received the Thayer Award.

The United States Military Academy (USMA), also known metonymically as West Point or simply as Army, is a United States service academy in West Point, New York. It was originally established as a fort, since it sits on strategic high ground overlooking the Hudson River with a scenic view, 50 miles (80 km) north of New York City. It is the oldest of the five American service academies and educates cadets for commissioning into the United States Army.

Douglas MacArthur was an American military leader who served as General of the Army for the United States, as well as a field marshal to the Philippine Army. He was Chief of Staff of the United States Army during the 1930s, and he played a prominent role in the Pacific theater during World War II. MacArthur received the Medal of Honor for his service in the Philippines campaign. This made him along with his father Arthur MacArthur Jr. the first father and son to be awarded the medal. He was one of only five to rise to the rank of General of the Army in the U.S. Army, and the only one conferred the rank of field marshal in the Philippine Army.

TheGalt House Hotel is a 25-story, 1,300-room hotel in Louisville, Kentucky, established in 1972. It is named for a nearby historic hotel erected in 1835 and demolished in 1921. The Galt House is the city's only hotel on the Ohio River.

The Superintendent of the United States Military Academy is its commanding officer. This position is roughly equivalent to the chancellor or president of an American civilian university. The officer appointed is, by tradition, a graduate of the United States Military Academy, commonly known as "West Point". However, this is not an official requirement for the position.

The Sylvanus Thayer Award is an honor given annually by the United States Military Academy at West Point to an individual whose character and accomplishments exemplifies the motto of West Point. The award is named after the 'Father of the Military Academy,' Colonel Sylvanus Thayer. The awardee is selected by, and the award is endowed by, a committee formed from the West Point Association of Graduates. It has been awarded annually since 1958 and is the closest recognition West Point has to granting an honorary degree.

The Manila Hotel is a 550-room, historic five-star hotel located along Manila Bay in Manila, Philippines. The hotel is the oldest premiere hotel in the Philippines built in 1909 to rival Malacañang Palace, the official residence of the President of the Philippines and was opened on the commemoration of American Independence on July 4, 1912. The hotel complex was built on a reclaimed area of 35,000 square metres (380,000 sq ft) at the northwestern end of Rizal Park along Bonifacio Drive in Ermita. Its penthouse served as the residence of General Douglas MacArthur during his tenure as the Military Advisor of the Philippine Commonwealth from 1935 to 1941.

The United States Military Academy and grounds were declared a National Historic Landmark in 1960 due to the Revolutionary War history and the age and historic significance of the academy itself. The majority of the buildings in the central cadet area are historic.

The history of the United States Military Academy can be traced to fortifications constructed on the West Point of the Hudson River during the American Revolutionary War in 1778. Following the war, President Thomas Jefferson signed legislation establishing the United States Military Academy (USMA) on the site in 1802. In 1817 the academy was transformed by the appointment of Sylvanus Thayer who drastically reformed the curriculum.

Hayes Gymnasium, completed in 1910, is the oldest section of the current Arvin Cadet Physical Development Center at the United States Military Academy. Originally built as an independent structure to replace the academy's previous Richard Morris Hunt-built gymnasium which had served between 1891 and 1910, it was part of a large contract bid awarded to the Boston architectural firm of Cram, Goodhue, & Ferguson in 1903.

The Douglas MacArthur Monument at the United States Military Academy at West Point commemorates the Medal of Honor-winning former Superintendent and General of the Army Douglas MacArthur. Designed by Walker Hancock, it was dedicated by MacArthur's widow Jean MacArthur in 1969. Situated on the upper western corner of the Plain next to the north entrance to MacArthur Barracks, the monument consists of a statue of the general surrounded by angled granite walls that bear inscribed excerpts from his final public speech, the 1962 Duty, Honor, Country address he made to the Corps of Cadets upon receiving the Thayer Award. 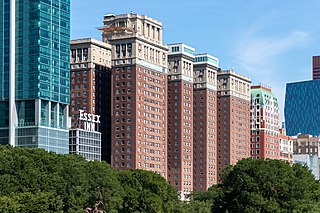 The Hilton Chicago is a centrally-located luxury hotel in Chicago, Illinois, United States. The hotel is a Chicago landmark that overlooks Grant Park, Lake Michigan, and the Museum Campus. It is the third-largest hotel in Chicago by number of guest rooms; however, it has the largest total meeting and event space of any Chicago hotel. From its opening in 1927 through 2008, every sitting president of the United States had been housed in the hotel before leaving office.

The Eggnog Riot, sometimes known as the Grog Mutiny, was a riot that took place at the United States Military Academy in West Point, New York, on 24–25 December 1826. It was caused by a drunken Christmas Day party in the North Barracks of the academy. Two days prior to the incident, a large quantity of whiskey was smuggled into the academy to make eggnog for the party, giving the riot its name. 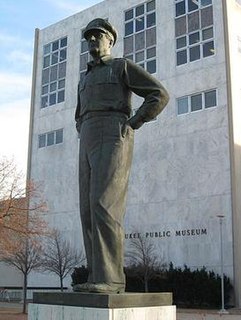 General Douglas MacArthur is a public artwork by American artist Robert L. Dean, a 1953 graduate of the United States Military Academy. Previously, the statue was located in MacArthur Square in the Milwaukee Civic Center Plaza, downtown Milwaukee, Wisconsin, USA. On June 7, 2014, it was relocated to its new waterfront location at Veterans' Park, next to the Milwaukee County War Memorial Center. With full military honors, the bronze statue of General Douglas MacArthur was rededicated at its new home on June 7, 2014. The ceremony was the capstone event for the MacArthur Memorial Week, held nearly 35 years after the statue's original dedication on June 8, 1979.