Johnson Stadium at Doubleday Field is a baseball venue located on the campus of the United States Military Academy, in West Point, New York. It is the home of the Army Black Knights baseball team.

Doubleday Field was named after Abner Doubleday, a member of the West Point Class of 1842. [1] The field was dedicated in May 1939, which was celebrated by the American League and National League as the centennial year of baseball. [1]

The field hosted the 2012 Patriot League Baseball Tournament Championship Series, in which Army defeated Holy Cross two games to one. [2]

Along the visitors bullpen there is usually a group of present and former cadets from the United States Military Academy, who are known to give opposing teams (and umpires) a hard time.

Johnson Stadium is placed in the heart of West Point. Behind right field you can see the library and other buildings, and behind left field is Cullum Hall.

In 2012, college baseball writer Eric Sorenson ranked the facility as the third best setting in Division I baseball. [3] 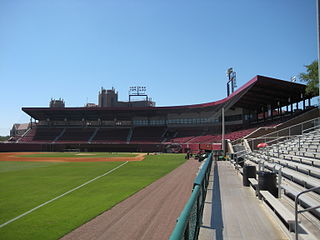 Mike Martin Field at Dick Howser Stadium is a baseball venue located in Tallahassee, Florida, United States, located adjacent to Doak Campbell Stadium on the campus of Florida State University. It is the home field of the Florida State Seminoles baseball team of the NCAA Division I Atlantic Coast Conference. It opened in 1983 and was renovated in 2004. The two-year, $12 million renovation project expanded the seating capacity to 6,700.

Hawks Field at Haymarket Park is a baseball stadium in the Haymarket District of Lincoln, Nebraska. It is less than a mile west of the University of Nebraska–Lincoln and is the home venue of the school's baseball team and the American Association's Lincoln Saltdogs. Hawks Field is adjacent to the smaller Bowlin Stadium, which hosts Nebraska's softball team.

The Army Black Knights football team, previously known as the Army Cadets, represents the United States Military Academy in college football. Army is a Division I Football Bowl Subdivision (FBS) member of the NCAA. The Black Knights play home games in Michie Stadium with a capacity of 38,000 at West Point, New York. The Black Knights are coached by Jeff Monken who is entering his eighth in season as head coach. Army claims three national championships, from 1944 to 1946. In addition, major selectors have awarded Army championships in 1914 and 1916. Army has produced 24 players and 4 coaches in the College Football Hall of Fame, 37 consensus All-Americans, and 3 Heisman Trophy winners.

USF Baseball Stadium at Red McEwen Field is a baseball stadium located in Tampa, Florida, United States. It is home to the University of South Florida Bulls baseball team of the Division I American Athletic Conference. The facility has a capacity of 3,211 spectators. Opening in 2011, it replaced Red McEwen Field as the home of USF's baseball team.

The Army Black Knights baseball team is a varsity intercollegiate athletic team of the United States Military Academy in West Point, New York, United States. The team is a member of the Patriot League, which is part of the National Collegiate Athletic Association's Division I. Army's first baseball team was fielded in 1890. The team plays its home games at Johnson Stadium at Doubleday Field in West Point, New York. The Black Knights are coached by Jim Foster.

J.L. Johnson Stadium is a baseball venue in Tulsa, Oklahoma, United States. It is home to the Oral Roberts Golden Eagles baseball team of the NCAA Division I The Summit League. Dedicated on June 17, 1977, the stadium was opened on March 6, 1978, for a game against Southeastern Oklahoma State University. Oral Roberts won the game 7–6. The venue's seated capacity is 2,418 spectators. 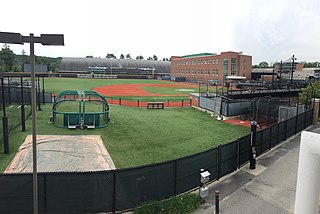 Red Rolfe Field at Biondi Park is a baseball venue in Hanover, New Hampshire, United States. It is home to the Dartmouth Big Green baseball team of the NCAA Division I Ivy League. The field has a capacity of 2,000 spectators. The field portion of the facility is named for Red Rolfe, Dartmouth Class of 1931, former New York Yankees player and Dartmouth athletic director from 1954–1967.

George S. Erath Field at Coy O. Williard Baseball Stadium is a baseball venue in High Point, North Carolina, United States. It is home to the High Point Panthers baseball team of the NCAA Division I Big South Conference. It has a capacity of 550 spectators.

The North Dakota State Bison baseball team is the varsity intercollegiate baseball program of North Dakota State Bison in Fargo, North Dakota, United States. The program's first season was in 1909, and it has been a member of the NCAA Division I Summit League since the start of the 2008 season. Its home venue is Newman Outdoor Field, located on North Dakota State's campus. Tyler Oakes is the team's head coach starting in the 2022 season. The program has appeared in 2 NCAA Tournaments. It has won 5 conference tournament championships and 2 regular season conference titles. As of the start of the 2018 Major League Baseball season, 1 former Bison has appeared in Major League Baseball.

Hal Robertson Field at Phillip Satow Stadium is a baseball venue in New York, New York, United States. It is home to the Columbia Lions baseball team of the NCAA Division I Ivy League. The facility is named for two Columbia baseball alumni– Hal Robertson and Phillip Satow. In 2007, a FieldTurf surface was installed, allowing for more use of the field during the offseason. In 2010, chairback seats were added, and the dugouts, press box, and scoreboard were renovated.

Alex Box Stadium, Skip Bertman Field is a baseball stadium in Baton Rouge, Louisiana. It is the home stadium of the Louisiana State University Tigers baseball team. The stadium section were named for Simeon Alex Box, an LSU letterman (1942), Purple Heart and Distinguished Service Cross recipient, who was killed in North Africa during World War II. On May 17, 2013, prior to a game against Ole Miss, the field was named and dedicated in honor of former LSU head baseball coach and athletic director Skip Bertman.