Hayes Gymnasium, completed in 1910, is the oldest section of the current Arvin Cadet Physical Development Center at the United States Military Academy. Originally built as an independent structure to replace the academy's previous Richard Morris Hunt-built gymnasium which had served between 1891 and 1910, it was part of a large contract bid awarded to the Boston architectural firm of Cram, Goodhue, & Ferguson in 1903. [1]

Hayes gym is a two-level gymnasium first built in 1910. It is now incorporated into the larger Arvin Cadet Physical Development Center. The gym's first floor underwent extensive renovation during recent rebuild of the overall Arvin gym complex, while the "main room" of the gym received new ventilation and roofing. The first floor the houses two large rooms that are currently utilized as the "Class of 1962 Fitness Center", which is bisected by the "Class of 1957 Hallway". The west wall of Hayes gym was torn down and reconstructed to mesh with the new Arvin gym renovation, which opened in August 2004.

The Class of 1962 donated an endowment which furnishes and maintains a large fitness center in the first floor of the gym. When originally dedicated, the "'62 Room" comprised the south half of the first floor of Hayes. Originally the room was furnished with weight machines and cardio equipment. It is utilized as an expanded "cardio" room, with treadmills, stationary bicycles, stair climbers, and other cardio equipment. The north half of Hayes gym was formerly the boxing instruction room(s), but they have now been combined to form one large room that houses weight machines, exercise mats, and balance and stretching equipment.

A wide hallway bisects the two main rooms on the first floor, running east–west. The academy has maintained the gothic interior architecture of this hallway during the many different renovations of Hayes. Maintained by a gift from the class of 1957, this un-renovated section of the building is a link to the gym's past when it was not only a place of exercise, but also housed the cadet restaurant and was a place for social gatherings. Formal ceremonies are occasionally held in this large hallway because of its "old-fashioned" look.

The second level of Hayes is what most cadets and USMA graduates think of as "Hayes Gym". It is a large open gym with a vaulted ceiling, hardwood floor, and elevated track (11.7 laps to a mile) that rings the room. The Department of Physical Education (DPE), USMA, teaches applied gymnastics (called "Military Movement") in Hayes, taking advantage of its historical and unusual support structures. The gym has eighteen 21' vertical ropes and two 60' horizontal ropes (suspended 12' from the floor). There are also 10 pull-up bars that are re 5' wide each and are suspended from the ceiling from vertical supports in such a manner that they can be "run across" (with proper technique), as is done during the IOCT. The gym's floor space is filled with gymnastic's apparatus and pads, such as vaults, bars, and rings as well as 1" and 4" tumbling mats. Prior to the reconstruction of the new Arvin CPDC, Hayes was also used for its basketball court, as three undersized courts fit side by side with the backboards suspended from the track structure. With the completion of the new gym and the six dedicated basketball courts in other parts of Arvin, DPE has removed the rims from the Hayes backboards and no longer uses it as a basketball or team handball facility, allowing the military movement equipment to remain in place year-round.

Memorial Gymnasium is a multi-purpose facility located in Nashville, Tennessee. Usually called Memorial Gym or simply Memorial, the building is located on the western end of the Vanderbilt University campus. It was built in 1952 and currently has a seating capacity of 14,326. It serves as home court for the school's men's and women's basketball programs.

The Payne Whitney Gymnasium is the gymnasium of Yale University. One of the largest athletic facilities ever built, its twelve acres of interior space include a nine-story tower containing a third-floor swimming pool, fencing facilities, and a polo practice room. The building houses the facilities of many varsity teams at Yale, including basketball, fencing, gymnastics, squash, swimming, and volleyball. It is the second-largest gym in the world by cubic feet. 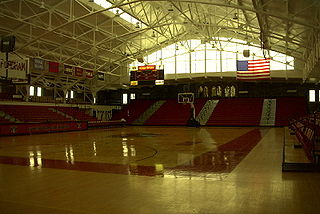 Rose Hill Gymnasium is a 3,200-seat multi-purpose arena on the Rose Hill campus of Fordham University in The Bronx, New York City, New York. The arena, which opened in 1925, is the oldest on-campus venue currently used primarily for an NCAA Division I basketball team and the second-oldest overall. Fordham's volleyball team also used the gym. The Rose Hill Gymnasium has a gothic façade that fits in well with the rest of Fordham University's buildings. The interior design features two high-tech video boards, bleachers that surround all four sides of the court, and additional elevated seating along the courtside. ESPN named this gym one of the four “cathedrals” of college basketball. At the time it was built, it was one of the largest on-campus facilities in the country, earning it the nickname "The Prairie." The Rose Hill Gymnasium has been the site of many legendary college and high school basketball games, including the final high school game of Lew Alcindor, later known as Kareem Abdul-Jabbar. During World War II, it was also used as a barracks. New York City Mayor Ed Koch lived in these barracks for a time. As early as 1970 an effort, headed by famed Fordham alumnus Vince Lombardi, was made to build a new arena. This effort ended with Lombardi's death and the move of head basketball coach "Digger" Phelps to the University of Notre Dame.

An obstacle course is a series of challenging physical obstacles an individual, team or animal must navigate, usually while being timed. Obstacle courses can include running, climbing, jumping, crawling, swimming, and balancing elements with the aim of testing speed, endurance and agility. Sometimes a course involves mental tests.

YMCA Boston was founded in 1851 in Boston, Massachusetts, as the first American chapter of YMCA.

Bynum Hall is the current home of the University of North Carolina at Chapel Hill Graduate Admissions office and was the first home of North Carolina Tar Heels men's basketball team. At an executive meeting on October 2, 1903, it was revealed that school President Francis Preston Venable announced that former North Carolina Supreme Court justice William Preston Bynum donated $25,000 to have a gymnasium built in honor of his grandson who was a student at the university and had died due to typhoid fever. Architect Frank P. Milburn drafted plans for the structure, which were then approved by Bynum and the university's Board of Trustees. The building was designed to have a Greek architecture influence and had three stories with an above-ground basement. It originally contained a swimming pool, gymnasium. office spaces, and other rooms for various sports like boxing and fencing. Construction was expected to begin in mid-May, but construction was delayed because the company supplying the bricks were not organized. The building had started construction by June and had various target dates that were pushed back for undisclosed reasons and eventually the building was completed in February 1905. 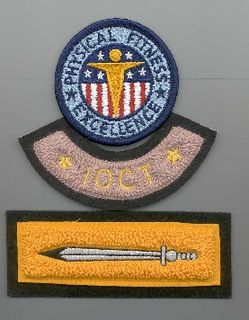 The Indoor Obstacle Course Test (IOCT) is a test of full-body functional physical fitness administered by the Department of Physical Education (DPE) at the United States Military Academy at West Point, NY. DPE considers the IOCT to be one of the best evaluations of total body fitness given in the Army. Cadets who earn an A− are authorized to wear the IOCT Badge on their athletic shorts. 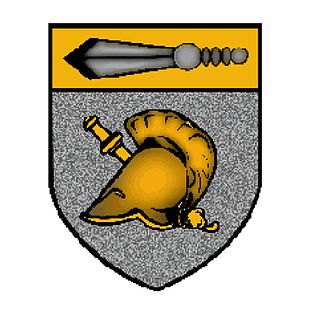 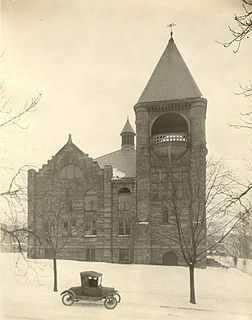 The Old Gym is a historic building at Washington & Jefferson College in Washington, Pennsylvania. It currently houses a modern exercise facility featuring cardiovascular, resistance, and strength-training equipment. The building also features a three-lane indoor track suspended above the main floor. 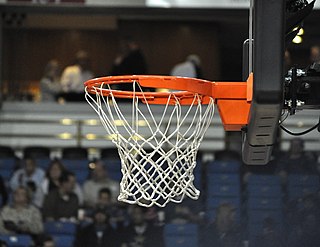 The Anteater Recreation Center (ARC) is an 89,000-square-foot (8,300 m2) indoor gym facility that is part of campus recreation at the University of California, Irvine (UCI); the anteater is the mascot of the UC Irvine athletics team. It is open to all UCI students, faculty and staff members, alumni, and other university affiliates, including spouses.

Henry Crown Field House is an athletic facility on the campus of the University of Chicago in Chicago, Illinois. Construction of the building took place in 1931 on land owned by the university. The cost of construction, however; was covered by Material Service Corporation CEO and philanthropist, Henry Crown. Under the direction of architects Holabird & Root, the field house was built as a replacement for Bartlett Gymnasium to be the home of the Chicago Maroons men's basketball team, as well as an indoor practice facility with a dirt infield that was utilized for football and baseball practices. A track encircled the infield and a raised wood floor that was used for basketball. In 2003, the team moved into the newly built Gerald Ratner Athletics Center, and the building was remodeled to become a full-time intramural facility. The building also contains a fitness center with resistance and weight training equipment, a cardio hallway with 34 cardio machines, a 200-meter indoor track, four multi-purpose courts for basketball, volleyball, indoor soccer, and tennis, an Astro-turfed multi-purpose room, five squash courts, and four racquetball/handball courts.