The Combating Terrorism Center is an academic institution at the United States Military Academy (USMA) in West Point, New York that provides education, research and policy analysis in the specialty areas of terrorism, counterterrorism, homeland security and internal conflict. [1] Established with private funding in 2003, it operates under the aegis of the Department of Social Sciences of the USMA.

At the time of the attacks on the United States on 11 September 2001, West Point's counterterrorism curriculum consisted of a single elective class. [2] In order to fill this gap and provide greater educational resources in terrorism-related issues, the academy welcomed the creation of the Combating Terrorism Center and included it in its Department of Social Sciences on 20 February 2003. Though thus a part of the United States Military Academy, the CTC was established with private funding and is an independent research group. [3] Primary funding for the founding of the CTC was contributed by Vincent Viola, a 1977 graduate of the United States Military Academy and former chairman of the New York Mercantile Exchange; significant initial support was also provided by Ross Perot, George Gilmore Jr. and Major (ret.) George Gilmore Sr. [4] The center's first Distinguished Chair was General (Retired) Wayne Downing until his death in 2007. Ambassador Dell Dailey presently holds the Distinguished Chair. The current director, LTC(P) Sean Morrow, began his tenure in January 2021. [5]

In addition to providing counterterrorism education, the CTC also regularly publishes a wide range of analyses and reports in its subject-specialty areas. Some of the most significant and large-scale of these research and analysis products are detailed below.

The Militant Ideology Atlas [6] used citation analysis to provide the first systematic mapping of the ideologues most influential in the global jihadi movement. [7] Analyzing the most downloaded jihadi literature from one of al-Qa'ida's online libraries and cataloging more than 11,000 citations from these texts, the Militant Ideology Atlas found that the most influential living jihadi thinkers are not – as is commonly supposed – senior leaders of al-Qa'ida itself, but rather a handful of primarily Saudi and Jordanian clerics; the most widely cited writer is the Palestinian-Jordanian Abu Muhammad al-Maqdisi. [8] The Atlas was published in November 2006.

Harmony Database Reports are works of analysis and policy recommendation produced by the CTC on the basis of documents declassified for this purpose by the Defense Department from the latter's Harmony Database, which houses al-Qa'ida-related documents captured throughout the world in the course of the War on Terror. The CTC's first Harmony report, Harmony and Disharmony: Exploiting al-Qa'ida's Organizational Vulnerabilities, was published in February 2006 and, along with extensive analysis, made primary source documents from the Harmony Database available to the public for the first time. [9] According to the CTC, Harmony and Disharmony "includes a theoretically informed analysis of potential opportunities to exploit al-Qa'ida's network vulnerabilities, a case study of jihadi operational failure, and specific recommendations for effectively addressing the evolving al-Qa'ida threat." [10] The CTC's second major Harmony report focussed on the Horn of Africa. Released in May 2007 al-Qa'ida's (Mis)Adventures in the Horn of Africa. [11] provides a detailed picture of al-Qa'ida's efforts to establish itself in East Africa, what its successes and failures were in the region, and how conditions in weak and failed states affect the ability of jihadi groups to function. The report also included a second batch of declassified documents from the Harmony Database, with full English translations, and in-depth profiles of key figures and groups. The entire report can be downloaded. [12] The third Harmony report explores al-Qa'ida's internal conflicts over the course of its history. Released in October 2007, Cracks in the Foundation: Leadership Schisms in al-Qa'ida from 1989–2006 [13] analyzes further declassified Harmony documents in order to tease out the issues that have divided al-Qa'ida's leadership and details the factions that have struggled for control of the organization.

CTC Sentinel is a monthly, interdisciplinary journal that covers research and news. It is available pdf file format. [15] The Atlantic describes it as "a leading practitioner-oriented journal on terrorism and counterterrorism issues." [16]

Ibn al-Shaykh al-Libi was a Libyan national captured in Afghanistan in November 2001 after the fall of the Taliban; he was interrogated by American and Egyptian forces. The information he gave under torture to Egyptian authorities was cited by the George W. Bush Administration in the months preceding its 2003 invasion of Iraq as evidence of a connection between Saddam Hussein and al-Qaeda. That information was frequently repeated by members of the Bush Administration, although reports from both the Central Intelligence Agency (CIA) and the Defense Intelligence Agency (DIA) strongly questioned its credibility, suggesting that al-Libi was "intentionally misleading" interrogators.

Saif al-Adel is a former Egyptian Colonel, explosives expert, and a high-ranking member of al-Qaeda who is still at large. Adel is under indictment by the United States for his part in the 1998 United States embassy bombings in Kenya.

Saddam Hussein and al-Qaeda link allegations were made by American government officials who claimed that a highly secretive relationship existed between Iraqi President Saddam Hussein and the radical Islamist militant organization Al-Qaeda between 1992 and 2003, specifically through a series of meetings reportedly involving the Iraqi Intelligence Service (IIS). In the lead up to the Iraq War, George W. Bush administration officials alleged that the Saddam Hussein regime had an operational relationship with al-Qaeda, basing the administration's rationale for war, in part, on this allegation and others.

Abu Muhammad al-Maqdisi, or more fully Abu Muhammad Essam al-Maqdisi, is the assumed name of Essam Muhammad Tahir al-Barqawi, an Islamist Jordanian-Palestinian writer. A Qutubi jihadi ideologue, he has popularized many of the most common themes of radical Islam today, like the theological impetus given to the notion of Al Wala' Wal Bara', being the first to declare the Saudi royal family to be apostates or considering democracy a religion, and thus whoever believes in it to be an apostate, but he is best known as the spiritual mentor of Jordanian jihadist Abu Musab al-Zarqawi, the initial leader of al-Qaeda in Iraq. However, an ideological and methodical split emerged between Maqdisi and Zarqawi in 2004 due to Zarqawi's takfeer proclamations towards the Shia populations in Iraq. Maqdisi opted for a more cautious approach towards targeted Shia killings, attempting to stop Zarqawi's radical ideological movement before Zarqawi's methods become counter-productive.

Operation Juniper Shield, formerly known as Operation Enduring Freedom – Trans Sahara (OEF-TS), is the military operation conducted by the United States and partner nations in the Sahara/Sahel region of Africa, consisting of counterterrorism efforts and policing of arms and drug trafficking across central Africa. It is part of the Global War on Terrorism (GWOT). The other OEF mission in Africa is Operation Enduring Freedom – Horn of Africa (OEF-HOA).

The U.S. Central Intelligence Agency's Mission Center forCounterterrorism was established in 1986, and is a division of the CIA's Directorate of Operations. It was renamed during an agency restructuring in 2015, and is distinct from the National Counterterrorism Center (NCTC), which is a separate entity. The most recent publicly known Assistant Director for Counterterrorism Mission Center was Chris Wood who led the organization from 2015 to 2017.

Evan F. Kohlmann is an American terrorism consultant who has worked for the FBI and other governmental organizations. 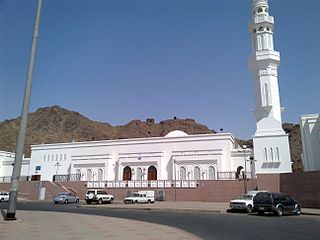 Salafi jihadism or jihadist-Salafism is a transnational, hybrid religious-political ideology based on the Sunni sect of Islamism, seeking to establish a global caliphate, characterized by the advocacy for "physical" (military) jihadist and Salafist concepts of returning to what adherents believe to be the "true Islam". The ideological foundation of the movement was laid out by a series of prison-writings of the Egyptian Sunni Islamist theoretician Sayyid Qutb during the 1960s.

Bruce Hoffman is an American political analyst specializing in the study of terrorism and counterterrorism, insurgency and counter-insurgency.

Akil N Awan is a British academic and the current RCUK Fellow in the 'Contemporary History of Faith, Power and Terror' and Lecturer in both International Terrorism and Contemporary Islam in the Department of History and the Department of Politics and International Relations, at Royal Holloway, University of London (RHUL). He is also a current Research Associate both with the Centre for Ethnic Minority Studies (CEMS), and with the New Political Communication Unit (NPCU) at Royal Holloway. Previously he has served as a Research Associate on the ESRC project Shifting Securities: News Cultures Before and Beyond the Iraq War.

Jarret Brachman is an American terrorism expert, the author of Global Jihadism: Theory and Practice and a consultant to several government agencies about terrorism.

Al-Qaeda in the Islamic Maghreb, or AQIM, is an Islamist militant organization that aims to overthrow the Algerian government and institute an Islamic state. To that end, it is currently engaged in an insurgency campaign in the Maghreb and Sahel regions.

Terrorism, in some of its definitions, serves to communicate a message from terrorists to a target audience (TA). By extension, symbols play an important role in such communication, through graphics that the organizations use to represent themselves, as well as the meaning and significance behind their choice of targets.

James J. F. Forest is an author and a professor at the University of Massachusetts Lowell.

Al-Qaeda is understood to have operated a number of safe houses, some of which were used as training centres. 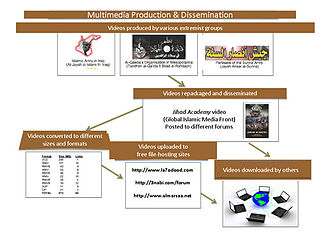 The Global Islamic Media Front (GIMF) is an Islamist propaganda organization that is associated with the terrorist group, al-Qaeda, and other jihadist groups. The GIMF is known by the U.S. Federal Bureau of Investigation (FBI) as an "underground media" organization. The GIMF specializes in production of jihadist material for distribution. It is one of several organizations that jihadists use to spread information via the Internet, including the well-known As-Sahab. Their slogan that is used on their materials is "Observing Mujahideen News and Inspiring the Believers." There is no indication who the leader of this organization is.

Edwin Bakker is head of the knowledge and research department of the Netherlands Police Academy and professor of Terrorism Studies at Leiden University.

Zia Ur Rehman is a Pakistani journalist, researcher and author, specialising on security issues, human rights, minorities, and politics.

Abu Sulayman al-Utaybi was a Saudi Arabian Islamic militant who is noted as a critic of the leadership of the Islamic State of Iraq.