The UAB Blazers are the varsity intercollegiate athletic programs that represent the University of Alabama at Birmingham (UAB). The school is one of the fourteen member institutions of Conference USA (C-USA) and participates in Division I of the NCAA. The school's men's basketball team plays in 8,508-seat Bartow Arena. The Blazers' colors are forest green and old gold. The men's basketball program has a long history of success spanning several decades.

The UCF Knights are the athletic teams that represent the University of Central Florida in Orlando, Florida. The Knights participate in the National Collegiate Athletic Association's (NCAA) Division I as a member of the American Athletic Conference. UCF was invited to join the Big 12 Conference on September 10, 2021, and accepted the invitation later that day. It is anticipated the Knights could join as soon as the 2023–24 athletic year pending negotiation of departure terms with the American Athletic Conference. 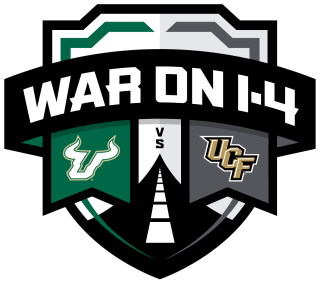 The War on I-4 is a college rivalry between the University of Central Florida Knights and University of South Florida Bulls. The rivalry is best known for its college football matchup which originated in a series of football games played from 2005 to 2008 and now takes place on Thanksgiving weekend, the de facto "rivalry weekend" for FBS football. In 2013, when UCF joined the American Athletic Conference, the schools began competing annually in all sports. In 2016, the schools officially adopted the "War on I-4" as an official competition series. Each year, the team with the most wins across all sports receives a gold trophy styled after an Interstate 4 (I-4) road sign with the logos of each school. The winner of the annual football game also receives a similar trophy. 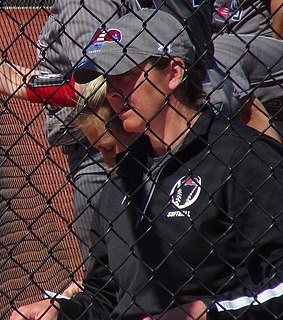 Danielle Henderson is an American, former collegiate All-American, medal-winning Olympian, retired professional All-Star softball pitcher who is currently the head coach at UMass. Henderson was a starting pitcher for the UMass Minutewomen softball from 1996 to 1999. Henderson also played professionally in National Pro Fastpitch from 2004 to 2007, where she currently ranks top-10 in career strikeout ratio (6.8). Along with numerous school records, she is the Atlantic 10 Conference career leader in ERA, shutouts, perfect games (3) and WHIP. Henderson represented the United States at the 2000 Summer Olympics and won a gold medal.

The Red Foxes are the athletic teams of Marist College. The Marist Red Foxes compete in NCAA Division I athletics as a member of the Metro Atlantic Athletic Conference (MAAC) the only exception being football, a member of the Pioneer Football League (PFL).

The CSU Bakersfield Roadrunners are the intercollegiate athletic teams representing the California State University, Bakersfield, located in Bakersfield, California. The Roadrunners compete at the National Collegiate Athletic Association (NCAA) Division I level as a member of the Big West Conference. 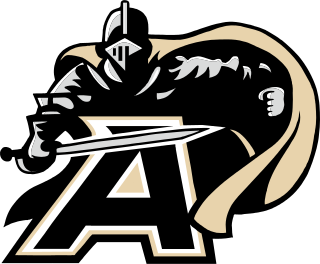 The 2012 Army Black Knights football team represented the United States Military Academy as an independent in the 2012 NCAA Division I FBS football season. The Black Knights were led by fourth-year head coach Rich Ellerson and played their home games at Michie Stadium. They finished the season 2–10.

Amber Jackson is an African-American, former collegiate All-American and retired 3-time professional All-Star, left-handed-hitting softball player at shortstop and a former college softball Head Coach, originally from Fontana, California. She played for three years with the Bethune–Cookman Wildcats, from 2003-05, before transferring to the Maryland Terrapins for the 2007 season. She is the season and career leader in numerous offense categories for both institutions, and is the Mid-Eastern Athletic Conference career leader in hits, triples and runs in three seasons. She played professional softball in the National Pro Fastpitch from 2007-09 with the defunct Washington Glory, winning a title and being named Player of The Year in 2007, and the USSSA Pride. Jackson led the Delaware State Hornets for five years from 2015-19 before pursuing teaching abroad. She is one of the elite NCAA Division I hitters to amass a career .400 average, 200 RBIs with at least 50 home runs and an .800 slugging percentage; she is also one of the elite players to steal 100 bases, score 200 runs with 300 hits and a .400 average, the only NCAA player to belong to both clubs. 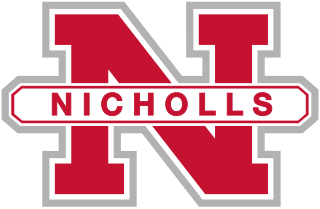 The Nicholls Colonels softball team represents Nicholls State University in NCAA Division I college softball. The team participates in the Southland Conference. Nicholls' first softball team was fielded in 1981. The team plays its home games at 500-seat Swanner Field at Geo Surfaces Park and are coached by Angel Santiago.

The Lamar Lady Cardinals softball team represents Lamar University in NCAA Division I college softball. The team participates in the Western Athletic Conference. The Lady Cardinals are currently led by head coach Amy Hooks. The team played its home games at the off-campus Ford Park for the first two seasons following the program restart. The Lady Cardinals began playing home games at the Lamar Softball Complex located on the university's campus starting with the 2015 season.

The Princeton–Rutgers rivalry is a college rivalry in athletics between the Tigers of Princeton University and Scarlet Knights of Rutgers University – New Brunswick, both of which are located in New Jersey. The rivalry dates back to the first college football game in history in 1869. Although the football series ended in 1980 due to the two schools going in different directions with their football programs, the rivalry has continued in other sports, primarily in men's basketball.