The LifeCam is a lineup of webcams from Microsoft for home PC users available in various series and models. One of the exclusive features include the integration with Windows Live Messenger, by having a Windows Live Call button that can be used to easily initiate a video call. These webcams are designed for both laptops and desktops.

There is a known problem for this particular unit. Several laptops have their wireless antenna placed along the top of the laptop display. Clipping the microphone to a laptop display like this may cause interference with the microphone, resulting in a great deal of static.[ citation needed ]

All webcams of the NX series are designed for notebooks and interfaces via USB 2.0.

These models both feature a similar round body design, with a round base, known as the Universal Attachment Base.

The entire series is designed for desktop uses, as it uses a base for attaching to a desktop monitor. All webcams of this series interfaces via USB.

iSight is a brand name used by Apple Inc. to refer to cameras on various devices. The name was originally used for the external iSight webcam, which retailed for US$149, connected to a computer via a FireWire cable, and came with a set of mounts to place it atop any then current Apple display, laptop computer, all-in-one desktop computer, or flat surface. 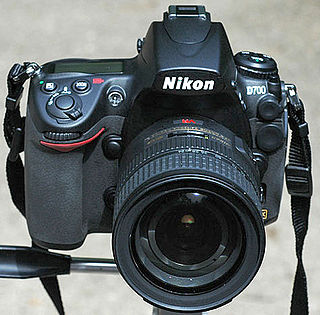 The Nikon D90 is a 12.3 megapixel digital single-lens reflex camera (DSLR) model announced by Nikon on August 27, 2008. It is a prosumer model that replaces the Nikon D80, fitting between the company's entry-level and professional DSLR models. It has a Nikon DX format crop sensor.

The Samsung NX10 is a 14.0 effective megapixel APS-C crop CMOS mirrorless interchangeable lens digital camera made by Samsung. It was announced on January 4, 2010 and is one of the first mirrorless cameras with an APS-C sized sensor. Samsung NX11 replaces NX10 in manufacturing since February 2011.

The Nikon D3100 is a 14.2-megapixel DX format DSLR Nikon F-mount camera announced by Nikon on August 19, 2010. It replaced the D3000 as Nikon's entry level DSLR. It introduced Nikon's new EXPEED 2 image processor and was the first Nikon DSLR featuring full high-definition video recording with full-time autofocus and H.264 compression, instead of Motion JPEG compression. It was also the first Nikon DSLR to provide high-definition video recording at more than one frame rate. 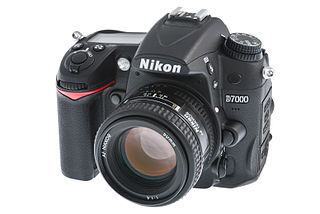 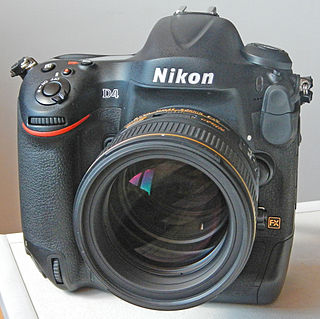 The Nikon D4 is a 16.2-megapixel professional-grade full frame (35mm) digital single-lens reflex camera (DSLR) announced by Nikon Corporation on 6 January 2012. It succeeds the Nikon D3S and introduces a number of improvements including a 16.2 megapixel sensor, improved auto-focus and metering sensors and the ability to shoot at an extended ISO speed of 204,800. The camera was released in February 2012 at a recommended retail price of $5999.95. It is the first camera to use the new XQD memory cards. It was replaced by the Nikon D4S as Nikon's flagship camera.

The Nokia 808 PureView is a Symbian-powered smartphone first unveiled on 27 February 2012 at the Mobile World Congress. It is the first smartphone to feature Nokia's PureView Pro technology, a pixel oversampling technique that reduces an image taken at full resolution into a lower resolution picture, thus achieving higher definition and light sensitivity, and enables lossless zoom. It was one of the most advanced camera phones at the time of its release in May 2012.

The Nikon 1 V2 is a Nikon 1 series high-speed mirrorless interchangeable-lens camera launched by Nikon on October 24, 2012.

The Nikon D5200 is an F-mount DSLR camera with a newly developed 24.1-megapixel DX-format CMOS image sensor first announced by Nikon on November 6, 2012 for most of the world and January 7, 2013 for the North American market.

The Nikon D7100 is a 24.1-megapixel digital single-lens reflex camera model announced by Nikon in February 2013. It is a prosumer model that replaces the Nikon D7000 as Nikon's flagship DX-format camera, fitting between the company's entry-level and professional DSLR models. Nikon gives the D7100's Estimated Selling Price in the United States as US$949.95 for the body alone.

The Canon EOS 100D, known as the EOS Rebel SL1 in the Americas and EOS Kiss X7 in Japan, is an 18.0-megapixel digital single-lens reflex camera announced by Canon on 21 March 2013. It has been described as the "world's smallest and lightest DSLR camera", either currently in production or in the APS-C format. Canon uses a smaller version of the APS-C sensor format than some other manufacturers including Nikon, Pentax, and Sony, with a crop factor of 1.6 rather than 1.5. It weighs 407 grams including battery and memory card.

The Samsung NX300 is a mirrorless interchangeable lens digital camera a part of Samsung NX series and a successor to Samsung NX210. It was announced in Jan 2013 along with 45mm f/1.8 2D/3D lens and is the first single-lens system capable of capturing 3D photos or Full HD movies. 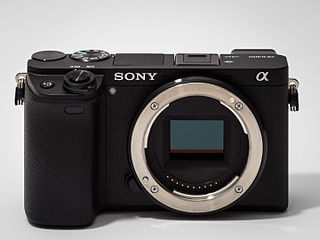 The Sony α6300 is a mirrorless digital camera announced on 3 February 2016. The α6300 features a 24 megapixel Exmor sensor with 425 phase detection autofocus points. The camera is powered by Sony's Bionz X image processor with an ISO range up to 51,200. Additionally, the α6300 can shoot images at up to 11 frames per second with continuous autofocus and exposure tracking. 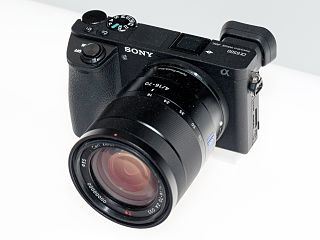 The Sony α6500 is a compact digital camera announced on 6 October 2016 shortly after photokina 2016.